This article describes the board game. For more word meanings see Halma (disambiguation) . 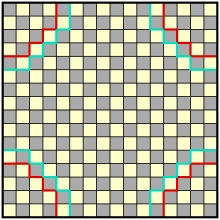 Square game board for 2 and 4 players

Halma board game around 1900 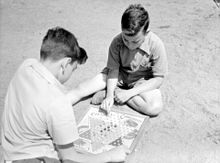 Two children with a Sternhalma game (1942)

Halma is a board game for up to six people. Today it is played on two different playing fields, a star-shaped ( Sternhalma , internationally known as "Chinese Checkers") or a square playing field (the original Halma).

Halma was invented in 1883 by the American surgeon George Howard Monks ; the name Halma comes from the ancient Greek ἅλμα "jump" (cf. Salta ); at the ancient Olympic Games , Halma was the long jump with jumping weights. Sternhalma is a German further development of the Halma, which appeared in 1892. Chinese Checkers is in English as well as Chinese Checkers and in French as Dames chinoises (both "Chinese means Checkers ") known to what point to a Chinese origin, but probably this name is the idea of an American game manufacturer thanks to the assumed that a exotic background could be conducive to the sale. Because of the many triangles visible in the playing field, it is also known as a trilma .

The game board for square halma has 16 × 16 square fields and is intended for two to four players. With three players the game is asymmetrical (see below) . In each corner there is a color-coded area called "house" or "courtyard". The house has 19 fields with two players and 13 fields with three or four players. 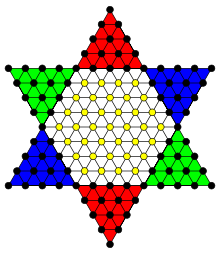 Playing field for 3 or 6 star stalks

The game board for Sternhalma can be played with 2 to 6 players. With five players there is an asymmetrical game (see below) . The star stem has 121 fields arranged in a triangular grid, which together form the shape of a six-pointed star. Each field is adjacent to up to six other fields. The fields at the tips of the star form a house and comprise 15 fields with two or three players and ten fields with more than three players. Because, in contrast to the square halma, the fields are purely geometrically not surfaces, but points on a grid, there are 24 fields that form the edge of a house.

Starting line-up and goal of the game

In the starting position the pieces (the so-called Halma cones or pawns) of a party are each in a “house”. With the square Halma 19 or 13 stones and with the star-shaped field 15 (three players) or 10 (six players), whereby with 10 stones the fields at the edge of the central hexagon remain free.

The aim is to bring all of your own game pieces into the “house” opposite. The winner is whoever succeeds in this first. This means that with three players the target house is empty, while with an even number of players the target is initially filled with the stones of another player.

The rules for the square playing field are the same as for the star-shaped halma. No pieces are made at Halma. In turn, everyone has a turn. One pawn may be moved on each turn. It can either be moved to an adjacent free space or it can jump over own or opposing pawns in the same direction, provided there is an empty space behind it. If further pieces can be skipped from this field, this may also be carried out. In this way, long sequences of jumps can arise, with which one can cross the entire playing field with a single move. With the square Halma, it must be clarified before the game whether moves and / or jumps can also be performed diagonally.

Halma players try to identify and develop courses for long jump sequences as possible. At the same time you block such tracks for the opponent. Since such lanes can be used by all players, the opponent also gains an advantage with the establishment of a lane. This is especially true for games with two people playing in opposite directions.

Furthermore, it must be ensured that no stone can reach all fields of the target "house" by jumping , as the fields that can be jumped are in a two-way grid; This means that each player has stones of different “types” that belong to different “types” spaces in the target “house”. The same number of field types are available in the target house as in the opposite starting house.

So if a stone draws instead of jumping, transforming it into a stone another "variety" and will have it (or another stone) again at least draw , so he gets his old "variety" again. A lot of moves (instead of jumping) hold up a party more than just during this one turn; you also have to keep an eye on how many stones of which “type” you have at the moment, even though they all look the same.

While the number of fields per variety in the start and finish house are the same with the star halma, this is not the case with the square halma.

The four types of fields can be seen in the following diagram:

If you want to play Halma with three players on the square field (with 13 pieces each), there are different conditions between the player who starts opposite the empty house and the other two who run against each other. This player is at a disadvantage in most strategies, as the other two can use the same stones for jump sequences much more often. Here it is recommended either to use the Sternhalma or to play the game three times, each one taking this "middle position". The same applies to Sternhalma with five players (each with 10 stones).

With a single additional rule and a slightly changed board (suggested by Eric Solomon ), the square halma becomes a similarly challenging game, Billabong . Further developments are the board games Salta and Defectors from Selecta .