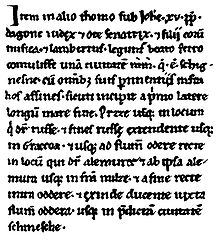 The Dagome Iudex (also Dagone iudex ) is a regest , i.e. the summary of the content of an older document, the corresponding original document has been lost. The document from the 10th century was named after the Judex (Lord, Judge) Dagome mentioned in the opening words . Several copies of it have been preserved, including the “Collectio canonum” of the Curia Cardinal Deusdedit from 1086/1087 , who had worked in Rome during the pontificate of Pope Gregory VII († 1085) .

Dagome Iudex is an important source for the establishment or recognition of a state that is mentioned as Schinesge (Gnesen). It is assumed that in the registration of a monk from the years 1086/1087 an act of donation by the Polan Duke Mieszko I († 992) to the Apostolic See from the year 991 is described, with which the Piast prince directs his city or country Subject to the protection of the Pope. At the Cracow Academy the certificate was called Oda's donation.

Document in the Vatican , modern tracing

The reference to a document of a "Dagome Iudex" not available in the original and also not mentioned anywhere before 1086 has led to numerous speculations. The Vatican copyist , but not the French, added the comment that he did not know the people of this sex and assumed that they were Sardinians.

It is assumed, among other things, that this formal act of donation was intended to secure the direct succession to the throne in Gniezno (“Schinesghe” in the Vatican document or “Schignesne” in the copy of Cambrai) for the underage children Mieszkos I, Mieszko (jun.) And Lambert , against Bolesław I. Chrobry , Mieszko's son from his marriage to Dubrawka . On the other hand, it can be assumed that, according to the Slavic custom of the time, Bolesław had already been awarded his inheritance when he reached the age of majority. Research also suggests that the donation was made in preparation for the Metropolitan Organization of the Church in Poland, which was actually carried out in the year 1000 in the Gniezno act . The regest contains the oldest geographical description of the political boundaries of the area of ​​Dagome's (also Dagone) and Ote and records the first known donation from a city or state to the Apostolic See. Since it is known that Ote refers to Oda von Haldensleben , it is assumed that Dagome Mieszko I was and that it is the area of ​​the Duke of the Polans , later Poland , although this name is not mentioned.

According to one hypothesis , Duke Mieszko I (Latin Mesco) was baptized with the "Christian" name Dagobert (his Christian baptismal name has not been passed down) and the Italian copyist, to whom the Central and Eastern European events of the 10th and 11th centuries Peoples and rulers of this region were completely closed, both names were shortened to "Dagome".

Other hypotheses speak of an immigration of Poles from the Balkans. In German historiography, the vague assumption of Mieszkos' Viking origin was often voiced, whereby one based only on the uncertainly transmitted second name Dago (Dagr) Mieszkos and the marriages of his daughter Sigrid-Storrada with Nordic kings. Although Viking influences are unmistakable in the Warta and Vistula region, the fact that no German chronicler reports about it and that no other Nordic first names appear under the names of the princely family speaks against the Nordic origin.

In summary, however, two hypotheses are considered probable: On the one hand, it can be a modification of copyists who have shortened or falsified the expression Ego Mesco dux ("Ich, Herzog Mieszko") to Dagome [iudex] , on the other hand comes a An unspecified baptismal name Duke Mieszkos, who converted to the Catholic faith in 966, as well as an abbreviated combination of his baptismal name and his pagan name Mieszko, which is known from other sources.