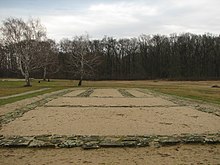 Fragments of the Valy castle complex near Mikulčice , which is often identified as the headquarters of the Moravian rulers.

The Mojmiriden (also Moimiriden ; Latin : Moimarii , Slovak and Czech : Mojmírovci ) were a Moravian ruler dynasty who ruled the early medieval Moravian Empire in the 9th century and at the beginning of the 10th century . The name of the Mojmirid dynasty is derived on the one hand from its first historically known ruler Mojmir I , on the other hand it is also historically documented in a letter of complaint from the Bavarian bishops from July 900 .

Whether Mojmir I should be considered the founder of the dynasty is now a matter of dispute. The development of the dynasty after 906 can only be guessed at. The Mojmiriden ruled mainly in today's areas of Moravia , Slovakia , Lower Austria and Northern Hungary , as well as temporarily in the neighboring areas.

Family table of the historically documented and, according to later tradition, handed down Mojmirids.

Johannes Aventinus states in his Bavarian Chronicle that in 805 the Moravian prince Vratislav had the Bratislava castle renovated on the basis of Roman ruins and renamed it to Wratisslaburgium (Vratislava) after himself. It is unclear whether Vratislav was connected to the later Mojmirids.

The historical existence of the alleged third son of Svatopluk I, Predslav (Latin Predezlauz ), is also controversial . who also ruled today's Bratislava and is said to have named it after himself (Brezalauspurc, Preslavvaspurch, PRESLAVVA CIV [ITAS]).