After the gradual loss of the conquered by his father areas, a civil war with his brother and repeated looting Moravia through Bavaria and Magyars succeeded Mojmir II. To renew even the Moravian archbishopric in 900 and 901 a directed against the Magyars alliance with the eastern kingdom to conclude. After a battle with the Magyars in Moravia in 902, the further fate of Mojmir II and the Moravian Empire in the 10th century is uncertain.

Approximate borders of Moravia and the Moravian area of ​​influence when Mojmir II came to power in 894.

After the death of his powerful father Svatopluk I in 894, Mojmir II ascended the Moravian throne at the age of about 22. In 894 he concluded a peace treaty with the Bavarians in order to secure his accession to power externally. In 895 the Bohemians split from the Moravian Empire, whereupon Mojmir II waged a war of reconquest against them until 897 in vain.

In 898 a civil war broke out in Moravia between Mojmir and his younger brother Svatopluk II . In 899 the Bavarians attacked on the side of the defeated Svatopluks, freed him and his entourage from the city in which they were held and brought them to Bavaria. In response to this, Mojmir supported the revolt of the East Mark Prince Isanrik against the "King in Bavaria" in 899. In 900 Moravia was sacked by the Bavarians and their Bohemian allies.

At the same time, however, Mojmir managed to achieve the renewal of the independent Moravian ecclesiastical province in 900. At the request of the Moravians, the Pope sent an archbishop and four bishops to Moravia. After the Hungarians occupy Pannonia on their return from their raid from Italy in the same year, Mojmir concluded a new peace agreement with the Bavarians, directed against the Hungarians.

According to the Swabian World Chronicle , in 902 the Moravians repelled an attack by the Magyars.

In the painting “Honfoglalás” (Landing) by Mihály Munkács, Mojmir II receives the Hungarian Grand Duke Árpád and his entourage

The Raffelstetten Customs Regulations document an intact trade between Moravia and the surrounding areas for the years 903–906. In 907 it came to the battle of Pressburg , at which the presence of Mojmir II and the Moravians is no longer mentioned. The Annalista Saxo also claims a Moravian victory over the Magyars for 906.

The historians Ján Steinhübel and Dušan Třeštík assume the year 906 as the year of death of Mojmir II and the end of the Mojmiriden rule. Třeštík suspects that the end of Great Moravia was sealed in a single battle near Nitra , in which the Moravian army was defeated by the Magyars. In the year 907 the Bavarians are said to have tried to restore the old conditions as part of their counter-offensive, to recapture Pannonia and to install Svatopluk II, who lived in exile in Bavaria, as the new Moravian ruler. The Bavarians were defeated, however, by the Magyars in the Battle of Pressburg , with which the end of the Moravian state became unalterable. This is now said to have broken up into many smaller local rulers. 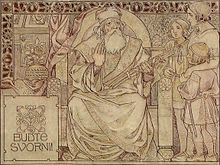 Mojmir II. With his brothers Svatopluk II. And Predslav, who are taught unity by their father Svatopluk I (picture in Prostějov Castle )

The historians Lubomír Havlík and TC Champion, on the other hand, assume that the Mojmirid rule will continue to exist until 924 or 925. It is argued that written sources report that there were four Moravian bishops (or one archbishop and three bishops) in the year 910. According to Champion, the prerequisite for their continued work is a functioning state power that secures them. In an attack in 924 or 925, the last members of the Mojmiriden dynasty, a certain Mojmir (possibly Mojmir II.) And Svatopluk (possibly Svatopluk II. Or a son of Mojmir II.) Are said to have fled into exile in Salzburg.

Three Hungarian chronicles from the 13th century give three different information about the death of Mojmir II. According to the Anonymus Chronicle, he died of natural causes, leaving behind a daughter who is said to have married the Hungarian tribal leader Zolt. This gave Zolt not only her hand, but also rule over her country. The chronicler Simon Kézai states that the Moravian ruler was killed in a battle near Bánhid and the Hungarian-Polish Chronicle links the fall of Great Moravia with a regicide.