This article describes the city. For the district see Žumberk .

Prostějov ( German  Proßnitz in Moravia ) is a town in the Olomouc region in the Czech Republic . It is the district town of the Prostějov district .

Prostějov is located in the Moravian Hanna plain , 18 km southwest of Olomouc at 223 m above sea level. The confluence of the Romže and Hloučela rivers is located near the town . 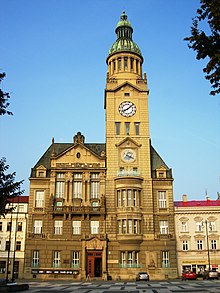 The place was first mentioned in 1141 as a settlement Prostějovice . The name Proßnitz has been documented since 1213. It was already a market village before 1300. From 1390 a fair was allowed to be held, which was equivalent to an elevation to the city. At that time the place belonged to the Lords of Kravarn and was part of the Plumlov reign . Since the city supported the Hussites during the Hussite Wars , it was sacked and pillaged by the Catholics in 1431. The other owners of the estate were Messrs Pernstein from 1495 to 1599 and the House of Liechtenstein from 1599 to 1848 . In 1857 the population was "Moravian and German language".

In the 19th century, Proßnitz is the seat of a district administration and a district court and at that time had four suburbs, a German and a Czech high school, a weaving school, a city hospital and a hospital of the Barmherzigen Brüder, gas lighting and 18,417 residents (1880), including 1,800 Jews . In 1892 a Czech, Karel Vojáček, was elected mayor for the first time. By 1900 Proßnitz already had 25,466 predominantly Czech residents.

After the occupation and annexation by the German Reich , the city was the seat of the district of Proßnitz until 1940. Thereafter, until 1945, the Proßnitz district was part of the Mährisch Ostrau district councilor .

After the end of the Second World War and the German occupation, the German-speaking residents of the city were expelled in 1945. In an exchange of fire with the Warsaw Pact intervention troops in 1968, during the so-called Prague Spring , three people died. In 1990 the historic city center was declared a monument protection zone. The city is now the center of the Czech textile industry .

In 2012 Prostějov was elevated to a statutory city .

The place was a garrison of the following military units:

During the Second World War, the following were stationed at the Kosteletz Air Base near Proßnitz:

As a garrison of the armed forces of the Czech Republic

They lived and worked in the city

The main station is on the Moravian-Silesian Northern Railway . The Prostějov city ​​station is also on the Nezamyslitz-Olmütz-Sternberg lines of the Kaiser Ferdinands-Nordbahn and Proßnitz-Triebitz (78 km) of the Moravian Western Railway.

The R46 expressway ( Rychlostní silnice 46 ) is the direct connection to the D1 motorway. The international Bernsteinstrasse cycle route also runs through the city.

In 1999 the international tennis tournament WTA Prostějov and some games of the U-16 European Football Championship took place in Prostejov . In 2001, the Group F games of the IIHF Continental Cup 2001/02 were played in the city. At the beginning of June, the Czech disco dance championships will also take place here.