This article deals with the early medieval Moravian ruler Slavomir , for other people with a similar name see Sławomir .

Slavomir from the Moravian ruling dynasty of the Mojmiriden was briefly the prince ( dux ) of Moravia in 871 . He led the Moravian uprising against the East Franconian occupation troops who had occupied Moravia after the arrest of the ruling princes Rastislav and Svatopluk I.

Slavomir was a member of the Mojmirid dynasty ruling Moravia and was a priest before 871. According to the historian Eric J. Goldberg, it is possible that Slavomir was one of the "high-ranking hostages" that his relative Prince Rastislav had to hand over to the Franks in 864, as Bishop Otgar von Eichstätt owned an estate near the Franconian-Moravian border in the same year granted to a Slav named "Sleimar". This could be a pronunciation variant of Slavomir's name.

Prehistory of the events of 871 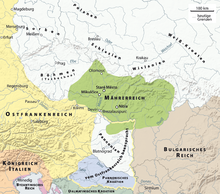 The Moravian Empire under Rastislav

In 870 the Moravian Knjas Rastislav was betrayed by his co-ruling nephew Svatopluk . Svatopluk managed to arrest his uncle and extradite him to his archenemy, the East Frankish King Ludwig the Germans , who blinded Rastislav and put him in a Bavarian monastery. Moravia was then occupied by the East Franconian troops of the Bavarian King Karlmann almost without resistance and the Moravian royal treasure was plundered. As a result, Svatopluk was able to assume sole rule over the whole of Moravia in 870, but Frankish occupation troops under the command of Wilhelm II and Engelschalk I continued to stay in the country. As early as 871, however, Svatopluk was accused of treason by Karlmann, arrested and taken away from Moravia.

Election to prince and Moravian revolt

The Moravians, who until then had endured foreign rule without resistance, assumed that Svatopluk had been killed and that they were therefore without a leader. Slavomir, a relative of Svatopluk who had previously worked as a priest, was elected as the new Moravian Knjas. Slavomir initially refused this choice, probably because of his spiritual activity. But when he was threatened with death if rejected, he finally accepted the election and headed a Moravian uprising against the East Frankish occupiers. According to the historian Eric J. Goldberg, the fact that Slavomir was a priest suggests that there were no other male members of the Moravian ruling dynasty because most of them were left hostage to the Franks. Slavomir may have been such a hostage himself in the past. Slavomir made an attempt to drive Wilhelm II and Engelschalk out of Moravia, but his large army was defeated by Karlmann's men, and Slavomir had to retreat to the Moravian capital.

According to the Czech historian Dušan Třeštík , Karlmann then saw that he could not defeat Moravia with sheer strength, and so he had no choice but to prove to the Moravians that their rightful Knjas Svatopluk was alive in order to put him back on the Moravian throne. He released Svatopluk from prison and presented him with royal gifts, which most likely came from the plundered Mojmirid treasure. Svatopluk agreed to lead a Frankish army to Moravia and fight against Slavomir. The army marched to the Moravian capital, where a decisive battle was to take place.

However, while the Frankish army was setting up camp in front of the capital, Svatopluk managed to secretly gain access to the Moravian fortress and convince the Moravians that he was still their ruler. So Svatopluk replaced Slavomir as Moravian Knjas and attacked the camp of the unsuspecting Bavarians. A large part of the Bavarian army was destroyed and Wilhelm II and his brother Engelschalk I were killed. Although the historical sources are silent on the further life of Slavomir, it is very likely that he was active as a priest again after Svatopluks I came to power again.

The Slovak historian Milan S. Ďurica describes Slavomir as a “forgotten or secretive king of the old Slovaks” and sees in him a “national hero” and “saint” who saved the “medieval state of the Slovaks, which was in great danger”. In addition, Ďurica considers it possible that Slavomir is the author of the Old Slavic texts in the Kiev papers .

The historical figure of Slavomir is also dealt with in the second volume of the novel series “Rozlet a pád Veľkej Moravy” (Eng. Rise and Fall of Great Moravia ) with the title “Slavomír knieža slovanské” (Eng. The Slavonic Prince Slavomir ) by the Slovak writer Albert Masár Tatranský .