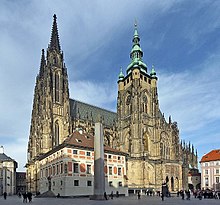 Golden Gate with Mosaic of the Last Judgment (annotated)

The Vitus Cathedral (also St. Vitus Cathedral , Czech Katedrála sv. Víta or Chrám sv. Víta , full name Katedrála svatého Víta, Václava a Vojtěcha ) at the Prague Castle is the cathedral of the Archdiocese of Prague and the largest church building in the Czech Republic . It was built under Crown Prince Karl, who later became Charles IV , from 1344 onwards first by the French architect Matthias von Arras and then mainly by the German master builder Peter Parler based on the French royal cathedrals. The Bohemian kings marched in a solemn procession along the Royal Route from Prague's old town into the cathedral, which served as the coronation church. In addition to the tombs of the Bohemian rulers , the cathedral also contains the coronation insignia, which are kept in the crown chamber. The cathedral is part of the World Heritage Historic Center of Prague . 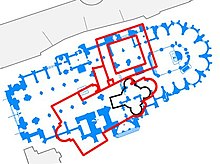 Floor plan of today's St. Vitus Cathedral with the location of the Romanesque predecessor buildings

With the construction of the current building (after the rotunda and the basilica already the third building on this site, at the same time the first cathedral - according to the time, a Gothic one ), on November 21, 1344 on the instructions of Charles IV . started when Prague by the bull of Pope Clement VI. of April 30, 1344 was raised to the archbishopric . The building at that time ended at the place where the transept is today - the rest of the current building, ie from the transept to today's main entrance, was not built until the 19th and 20th centuries. However, the history of the building goes back to the 10th century on the one hand, and on the other hand there was a break of several centuries until the last third of the 19th century. The construction took place instead of a 925 under St. Wenceslas built the rotunda and the three-aisled Romanesque basilica begun under Spytihněv II (from 1060). Spytihnew died in 1061; the actual builder of the new church was his brother and successor Vratislav II. The double-choir basilica was much smaller than the current building. Parts of the rotunda with the graves of the saints were integrated into the new building, such as the south apse with the Wenceslas tomb.

View of Prague and the cathedral from Schedel's world chronicle

At the beginning, the French master builder Matthias von Arras directed the new Gothic building. After his death in 1352 , Peter Parler from Schwäbisch Gmünd and his sons Wenzel Parler and Johann Parler the Younger in the last quarter of the 14th century continued the work, later the master Petrlík (Peterchen), first mentioned in 1418, took over the construction. By the beginning of the Hussite Wars in 1420, the choir and the base of the main tower had been completed. Due to the ever slower further construction, only the second and third floors were built in the late Gothic style. The tower top was created between 1560 and 1562 by Bonifaz Wohlmut and Hans Tirol and changed in the Renaissance style in the 18th century, but remained unfinished. In the age of the Reformation, the cathedral was a significant interface between the denominations. For a while it served the Calvinists as a parish church. Much of the cathedral's precious Gothic furnishings, such as numerous sculptures of saints and consecrated altarpieces, were destroyed by the Protestant iconoclasts .

The state of construction from 1887

Václav Michal Pešina (1782-1859), canon at the cathedral, was the initiator of the further construction in the 19th century. In 1859 the Prague Cathedral Building Association was founded and work began in 1861. The first master builder of this second building phase was Joseph Kranner , a representative of the Neo-Gothic . In 1873 Josef Mocker was commissioned to complete the Vitus Cathedral. Based on his design, the neo-Gothic west facade with two towers was controversially built, which relativizes the original south orientation of the building somewhat. The southern main tower facing the city was therefore no longer continued in its originally planned form. The final completion of the church after a construction interruption in the 15th century took until the completion of the construction in 1929 by Mocker's successor Kamil Hilbert . On September 29th of this year the cathedral was inaugurated on the thousandth anniversary of the death of St. Wenceslas .

A 14-year legal dispute between the Czech state and the Catholic Church in the Czech Republic over ownership of the cathedral, which had been expropriated in 1954, was decided in January 2007 by the Supreme Court in favor of the state, after a lower court had initially awarded it to the Church. The Archdiocese of Prague appealed against the judgment. The Czech state, represented by President Václav Klaus , and the Catholic Church, represented by Archbishop Dominik Duka of Prague , reached an agreement. The maintenance and use of the cathedral is ensured by state funds administered by the church. The supervision of Vitus Cathedral is delegated to a council of seven personalities (including the President, the Archbishop, the Mayor of Prague and the chairmen of the two chambers of the Czech Parliament), who are the only ones who each have a key to the chamber with the Czech coronation insignia. 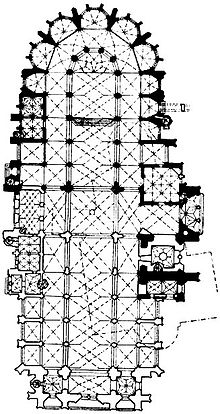 Oriented floor plan (east is up)

The mighty three-aisled cathedral was built in the Gothic style. It is the largest cathedral in the Czech Republic. 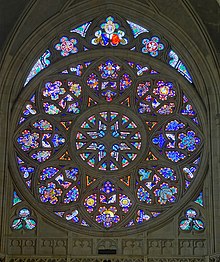 Rosette "The Creation of the World" (annotated) 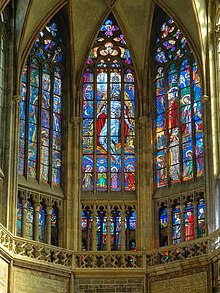 Chapel of the Holy Sepulcher 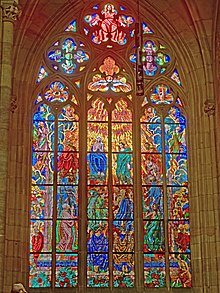 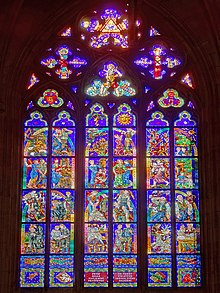 above the Golden Gate 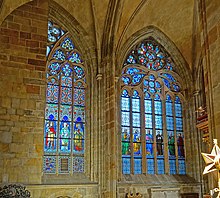 Vitus Cathedral is architecturally and stylistically groundbreaking for the further development of the late Gothic. Numerous tracery motifs can be found here for the first time and, starting from the construction works of St. Vitus Cathedral, spread across Europe. In addition, the choir of the cathedral is one of the first buildings with the parallel ribbed vault, which was used in numerous buildings of the late Gothic period. The vestibule in front of the south transept portal has a particularly elaborate vault with freely hanging ribs. In the sacristy of the St. Vitus Cathedral there is a vault with a hanging keystone . The triforial gallery with portrait busts of the builders and clients as well as the bay-like, inclined window sections in the upper aisle of the choir should be mentioned as further architectural features .

Inside the cathedral there is an extremely rich interior. The most important works still by Parler are in the Wenceslas Chapel in the south aisle, lined with semi-precious stones and gilded stucco . The Habsburg tomb erected by Alexander Colin in the middle of the choir dates from the 16th century . The most significant of the baroque furnishings is the high tomb of St. John of Nepomuk, executed by the silversmith Johann Joseph Würth in 1733–36 based on designs by Joseph Emanuel Fischer von Erlach and a model by the sculptor Antonio Corradini . Under the direction of Kamil Hilbert, who succeeded the cathedral builder Joseph Mocker in 1899, the neo-Gothic high altar was built, and many contemporary Czech artists contributed to the interior decoration. The so-called window of the patron saint in the New Archbishop's Chapel (west of the north entrance) was completed in 1931 by the glass artist Jan Veselý based on a design by Alfons Mucha ; Max Švabinský (1934) designed the two large glass windows “The Outpouring of the Holy Spirit” and “The Last Judgment” .

Since 1355 the head of St. Vitus has been kept as a relic in St. Vitus Cathedral , as well as the dogs of St. Adalbert , the dogs of St. Wenceslas , the sword of St. Stephen , a tooth of St. Margaret , part of the shin of St. Vitale , a rib of the Saint Sophie , the jaw of Saint Eoban , a splinter from the cross of Jesus , the tablecloth of Holy Communion , a dress of the Virgin Mary and the staff of Moses . 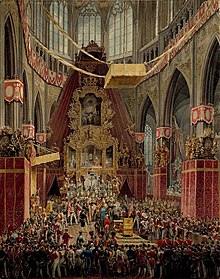 The coronation of King Ferdinand V in St. Vitus Cathedral in 1836

Even before the cathedral was rebuilt under Emperor Charles IV , St. Vitus Cathedral was the coronation church and burial place of the Bohemian rulers . The coronation insignia, including the Wenceslas crown , are kept in the crown chamber of the cathedral, on the floor above the Wenceslas Chapel and only accessible through it . The Crown Chamber has been locked by seven locks since 1867, the keys of which have been deposited with seven different Prague dignitaries.

In addition to St. John Nepomuk , the following monarchs and their family members are buried in St. 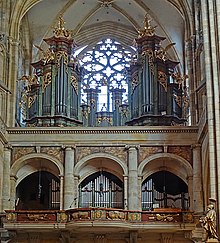 View of the two organ brochures

In the north aisle there are two organ cases on the galleries . The case on the upper gallery belonged to a baroque organ built by Anton Gartner in 1765 . The instrument had 40 registers on 3 manuals and a pedal. In 1909 the organ was removed and lost. The case is empty today and serves as a pure decoration.

On the gallery below is a neoclassical organ case that houses the current cathedral organ. The instrument was built by the organ builder Josef Melzel in the years 1929–31; 1999–2001 the instrument was completely overhauled by the organ building company Brachtl a Kánský. The instrument, which is rather modest in relation to the large church interior, has 58 registers (4,475 pipes ) on 3 manuals and pedal. The organ work has a large number of basic parts (flutes and principals) and comparatively few reed parts (8 in total); With this disposition, the instrument has a rather soft tone - a typical property of post-romantic organs. The playing and register actions are purely pneumatic.

In 2017, the German organ builder Gerhard Grenzing was commissioned to build a new, large cathedral organ. At the end of 2019, the new instrument was completed in the workshop in El Papiol (Spain) and is now being transported to Prague, where it is to be inaugurated on June 15, 2020.

The new organ with a weight of over 30 tons will be placed on the choir above the western entrance of the cathedral and will allow a clear view of the large rose window. The modern design of the instrument comes from the designer Peter Olaf. It will have 110 stops (6500 pipes) on four manual works and a pedal. 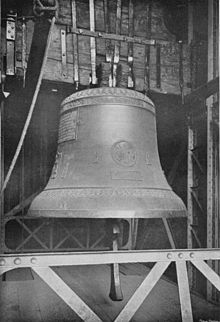 Wikisource: Extract from a letter from Prague due to the destruction of the Thumb Churches  - sources and full texts