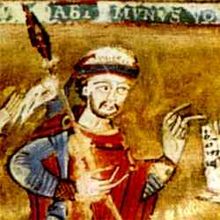 Spytihněv II (* 1031 ; † on January 28, 1061 ) was Duke of Bohemia from 1055 to 1061 . Some contradicting information is available about his short reign. His relationship with the Germans in Bohemia and interventions in the rulership in Moravia are particularly emphasized .

Spytihněv was the eldest son of Břetislav I and his wife Judith . As a child he spent some time hostage at the court of Henry III. , initially from 1039 to 1040, a second time from 1041 for an unknown period. After his return, he was granted control of part of Moravia around Olomouc and later the Saaz castle district . In 1054 he was married to Hidda, a subsidiary of Wettiners and Lausitzer Margrave Dietrich I .

In 1055 he succeeded his father. It is not entirely certain whether the statement in the Chronica Boemorum that he had all Germans expelled from Bohemia on the day he took office is really correct. In any case, his mother and the abbess of St. George's Monastery , both of German descent, had to leave the country. On the other hand, he later expelled the Slavic monks of the Sázava monastery and instead installed a German abbot and a Latin convent. Although xenophobia cannot be ruled out at that time either, the Duke's “anti-German” attitude in this case seems to be an interpretation of his later chronicler and the expulsion actions are motivated personally or by power politics.

At the beginning of his reign there seems to have been disputes over the seniority principle , which has only just come into force in Bohemia . So Spytihněv drove his brother Vratislav to Hungary, he brought the two youngest brothers Konrad and Otto to the Prague court and gave them insignificant court posts. The administration of Moravia by the non-ruling family members, which Břetislav I wanted, was thus suspended. In order to secure his power in the eastern part of the country, Spytihněv also had 300 Moravian greats called to the Chrudim Castle . When they did not obey the summons, he had them arrested and detained in Czech castles. However, under pressure from the Hungarian King Andreas I , he let his brother return to Moravia in 1058.

Tumba by Spytihněv in St. Vitus Cathedral in Prague

Around 1060 Spytihněv turned to Pope Nicholas II with the request for the dignity of the king . However, he only granted him the right to wear the bishop's miter in return for the payment of an annual interest of 100 pounds silver . The status of the Bohemian Duke was upgraded, but the royal crown was only achieved by his brother and successor Vratislav II. Spytihněv died at the age of thirty. His son Swatobor Friedrich was Patriarch of Aquileia from August 1084 to February 23, 1085 .