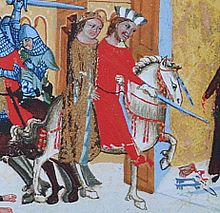 Judith von Schweinfurt (also Guta , Czech Jitka ze Schweinfurtu or ze Svinibrodu ; * before 1003; † August 2, 1058 in Hungary ) was a Duchess of Bohemia by marriage .

According to contemporary information, the beautiful, graceful young woman spent her youth in the Benedictine family monastery in Schweinfurt , where she was brought up. There she met Břetislav, son of the Bohemian Duke Oldřich and his native wife Božena, and fell in love with him.

However, it was clear to him that, due to his background, he had no way of holding her hand. On July 7, 1021 Judith von Břetislav was kidnapped first to Bohemia and later to Moravia , where the Germans did not have such a strong position of power. In 1029 both married in Olomouc and, judging by the historians, had a happy marriage.

Judith gave birth to her husband five sons: Spytihněv , Vratislav , Konrad , Jaromír and Otto I. the fair (Czech Ota I.).

After her husband's death, she was expelled from the country by her son Spytihněv in 1055 and spent the rest of her life in Hungary . After her death, her remains were transferred to Prague by Duke Vratislav II and buried in St. Vitus Cathedral.

Legend has it that she married Peter Orseolo in Hungary (who died in 1046/47).