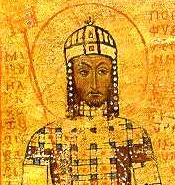 Book miniature by Manuel I (part of a double portrait together with his second wife Mary of Antioch , Vatican Apostolic Library , Rome)

Manuel I came from the Byzantine imperial dynasty of the Comnenes . He was the fourth son of Emperor John II Comnenus (1118–1143) and thus a grandson of Emperor Alexios I Komnenos (1081–1118). His mother was Piroska of Hungary (* 1088; † 13 August 1134), who took the name Irene at the coronation and is venerated as a saint of the Orthodox Church . She was a daughter of the Hungarian King Ladislaus I from the house of the Arpaden and his wife Adelheid of Swabia .

Manuel I was proclaimed emperor in 1143 after the death of his father, although he was the youngest son. This, because two of his older brothers, the co-emperor Alexios Komnenos († 1142) and Andronikos Komnenos († 1142) had died before him and the third, Isaac , was considered a youth "of a fluctuating temperament". Emperor John II therefore decided to appoint Manuel as the most gifted of his sons as his successor. Shortly before his death, he personally put the crown on Manuel and obliged his generals to recognize him as the new emperor. Manuel's uncle Isaak Komnenos took the side of his younger namesake, but the intervention of General Johannes Axuch decided the power struggle in favor of Manuel, who then acted mildly towards his rebellious relatives, including Emperor Johannes Roger Dalassenos . In 1145 the elder Isaac failed in another attempt to wrest the throne from Manuel I.

His rule meant a late golden hour for the Byzantine Empire , but this was followed by the final decline as a great power, for which he was partly to blame due to his ultimately failed policy. An important source for his reign is the history of Niketas Choniates . 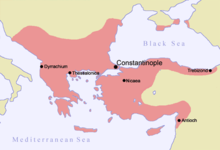 Manuel pushed the Byzantine expansion policy in the Balkans , but his plan for a Hungarian- Byzantine alliance was abandoned by himself around 1170. Since Manuel himself came from the Hungarian ruling family on his mother's side, he could count on a strong pro-Byzantine party in the Hungarian nobility for his Hungarian policy.

Manuel gained dominant influence in Raszien (Serbia) through the campaign in 1149/50 , which after the rebellion of Grand Župan Uroš II supported by the Norman Roger II. 1150 had to recognize again the Byzantine supremacy as a vassal. Overall, under Manuel, the Balkans replaced Asia Minor as the main field of Byzantine foreign policy. The army campaign in the Balkans, which Manuel led personally, began in 1149 and led from the Albanian Valbona via Kosovo to Ras , the capital of Rascia, which he captured and occupied. A counter-attack by Uroš II did not lead to a decisive result and Manuel took up a second campaign against the Raszian ruler in 1150. At the end of 1150 he led the campaign from Niš , following the course of the Morava , to the Save , where he was supposed to intercept the Hungarian reinforcement of Gesa II . After a swivel on the course of the Drina , Manuel came back to Raszien. The battle of 1150 between Manuel and Uroš II took place in November on the Tara River . Despite the onset of snowfall and the unfavorable topography, Manuel was able to withstand the attack of the Serbian-Hungarian army on the banks of the Tara and, after a less than decisive battle, managed to get the Great Župan to appear in his camp and kneel down before him as a vassal. The rascal ruler thus committed himself to Manuel to provide troops for his campaigns in Europe as well as in Asia Minor. A magnificent triumphal procession with the leading Hungarian princes and Serbian prisoners was held on the arrival of the army in Constantinople . The triumph was presided over by the Bishop of Thessaloniki and described in poems by Theodoros Prodromos and the anonymous so-called Manganeios Prodromos.

The territorial disputes in Dalmatia and Croatia for supremacy in the Balkans between Manuel and Gesa II culminated in the battle of Sirmium in 1167, when the Hungarians were defeated by the general Andronikos Kontostephanos , a nephew of Manuel, and the rascals allied with him . This decided the Byzantine-Hungarian wars of 1151–1153 and 1163–1168 and the entire western Balkan peninsula was in Byzantine possession. Thereupon Manuel fortified the Danube border.

He also paid more attention to western Europe than his predecessors. One reason for this reorientation of foreign policy was Manuel's attempt, probably with recourse to Justinian I , to restore rule over (parts of) Italy (s) in particular. Manuel cultivated good relations with the Hohenstaufen , especially with Konrad III. , whom he got to know during the Second Crusade and with whom he entered into an alliance in Thessaloniki in 1148 (→ Treaty of Thessaloniki ). Konrad, who fell ill in December 1147, had taken advantage of the hospitality of Manuel for some time, who sent him medical help, cared for him personally and provided support for the crusade. Manuel had married Konrad's sister-in-law Bertha von Sulzbach in 1146 , with whom he had a daughter, Maria Komnena . The dynastic connection was strengthened by the marriage of Manuel's niece Theodora with Konrad's half-brother Heinrich II. Jasomirgott of Austria (Duke of Bavaria, from 1156 Duke of Austria).

Both rulers also agreed on joint action against the Normans in southern Italy, with whom Manuel fought several battles from 1147 onwards. After Konrad's death, however, the relationship between the two empires cooled noticeably, especially due to Manuel's intervention in Italy . There Byzantine troops landed in Ancona , what is to tensions with the Holy Roman Emperor Frederick I came. In 1158 the troops had to withdraw. Thereupon he allied himself with the Norman Sicily against Frederick and also supported the northern Italian cities in their fight against Barbarossa. Negotiations with Pope Alexander III. almost led to the recognition of Manuel as all-Roman emperor, while Friedrich was banned by Alexander. When the Pope refused to take this last step in 1168 in order not to fall into Byzantine dependence, there was a renewed rapprochement between Manuel and Barbarossa in 1172. However, none of these political traits achieved resounding success in Italy.

But Manuel's policy in the East was all the more successful. There he won Cilicia and, after a conflict with the Crusader state Antioch , the Principality of Antioch , which became the Byzantine fiefdom . In 1161 he married Mary of Antioch from the House of Poitou after his first wife Bertha died in 1160. Meanwhile, Manuel's able General Johannes Axuch successfully fought against the Turks . He opposed the growing influence of Venice with an alliance with Genoa and Pisa . The Byzantine presence in Anatolia was reinforced during his reign.

However, the defeat against the Seljuks in the Battle of Myriokephalon (1176) ruined his success in this area. At the same time, it also marked the end of the Byzantine policy of reconquest in Asia Minor and was the beginning of the final loss of this important area to the Turks. However, it is also questionable whether the attempt to concentrate only on Asia Minor would have been successful, especially because of the Turkish invasion. The resources that would have been necessary for a lasting pacification of the region might have exceeded the strength of Byzantium.

The emperor was fascinated by chivalry , as he was inclined to the West in general like hardly any other Byzantine ruler and enjoyed a lot of respect there. During his reign, Byzantium flourished economically and culturally. In addition to the negotiations with Pope Alexander III. he also tried to restore the unity of Christianity by contacting Syrian Monophysites and the Armenian Church. His far-reaching alliance policy, combined with a clever marriage policy, ensured that Byzantium could appear as a great power for the last time.

Manuel was married twice. His first marriage in 1146 was Bertha von Sulzbach , a daughter of Count Berengar I von Sulzbach from his second marriage to Adelheid von Wolfratshausen , who took the coronation name Irene in Constantinople. Their political status was that the Roman-German King Konrad III. was married to her sister and had also adopted Bertha - in order to raise her rank. Thus the rulers of the western and eastern empires were related by marriage and Manuel, as it were, "son-in-law" of Konrad. Bertha was thus also a pledge for the alliance from 1142 between King Konrad III. and Emperor John II against Roger II of Sicily. Bertha therefore came to Constantinople with the Byzantine embassy as early as 1142, that is, four years before her wedding, to prepare her for her role as future empress. On the occasion of this marriage, Manuel I undertook a campaign against Masúd I (Rukn ad-Dīn Mas'ūd), Sultan of the Seljuks of Rum (1116-1156) in 1146, in order to show his German wife the Byzantine knighthood in all its splendor to lead. The campaign ended unsuccessfully, however, with the withdrawal of Manuel's troops and an armistice (1147). Empress Irene died at the end of 1159 after an exemplary life devoted to the family.

Manuel got engaged in 1159/60 on the recommendation of King Baldwin III. of Jerusalem with Melisende of Tripoli (* approx. 1143; † after 1162), a daughter of Raimund II. Count of Tripoli from the house of the Counts of Toulouse and the Hodierna of Rethel, Princess of Jerusalem . Despite extensive preparations by the bride's parents, Emperor Manuel broke off the engagement after he learned that there were doubts about the legitimacy of their birth due to the well-known quarrel between their parents. This humiliation was too much for her father, Count Raymond II of Tripoli: he had the twelve galleys planned for the wedding converted into warships and used them to raid the coast of Cyprus. It was also too much for Melisende: It withered and faded away early, but lived on as the "Princesse lointaine" in the French chivalric romances.

Manuel married another "Latin woman", Maria of Antioch , who took the coronation name Xene, on December 25, 1161, to the annoyance of the population . She was the daughter of Raimund Prince of Antioch from the House of Poitou-Aquitaine (son of the first troubadour William IX , Duke of Aquitaine ) and Constanze , Princess of Antioch (daughter of Prince Bohemond II from the House of the Princes of Taranto ( Hauteville )).

Extra-marital:
With Theodora Batatzina (a daughter of Theodoros Batatzes and the Eudokia Komnene):

From relationships with unknown lovers:

The works of Johannes Kinnamos and Niketas Choniates are important sources for Manuel's reign .

Commons : Manuel I.  - Album with pictures, videos and audio files