Otto von Freising , also Otto I of Austria (* around 1112 probably in Klosterneuburg near Vienna ; † September 22, 1158 in the Cistercian monastery Morimond in France ), had been Bishop of Freising since 1138 and one of the most important historians of the Middle Ages .

Otto as Bishop of Freising, in the background the episcopal city of Freising ( Babenberger family tree , around 1490, Klosterneuburg Abbey ) 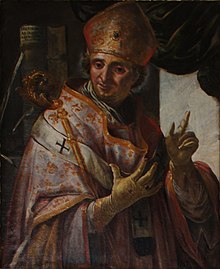 Otto von Freising on a painting in the Fürstengang Freising 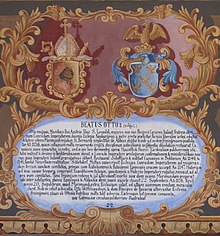 Coat of arms of Otto von Freising in the Fürstengang Freising

Church window by Martin Häusle in the parish church of Liesing

Otto von Freising was born around 1112 as the fifth son of the holy Babenberger Leopold III. , Margrave of Austria, and the daughter of Emperor Heinrich IV , Agnes von Waiblingen . Among his brothers were Leopold IV , Duke of Bavaria, Heinrich II , Duke of Austria, and Conrad II , Archbishop of Salzburg . His half-brother was King Konrad III. Otto was also an uncle of Emperor Friedrich Barbarossa .

He received his first training in the monastery of Klosterneuburg , which his father founded in 1114. In 1126 he was appointed provost of the monastery . In the same or the next year Otto went to study in France, above all in Paris , which had established itself as the center of the then new scholasticism (in contrast to the common monasticism ). Otto spent six years there listening to Peter Abelard , Hugo von St. Viktor and Gilbert de la Porrée .

In 1132 he joined the Cistercian order together with 15 German classmates, some of whom were high-born, and came as a novice to the Morimond monastery in Champagne . Six years later, in 1138, as a 26-year-old monk, he was elected abbot . But the next day he received from King Konrad III. appointed Bishop of Freising and from then on endeavored to renew church life in his diocese and its monasteries, of which he gave a new order to Schäftlarn ( Premonstratensians ), Schlehdorf ( Augustinian canons ) and Innichen ( Benedictines ). He freed the Freising Cathedral from the oppressive secular bailiwick , he led the cathedral school to a considerable importance. He re-founded the Schliersee (collegiate monastery) and Neustift (Premonstratensian) monasteries near Freising. Strangely enough, however, these were not Cistercian monasteries.

During the investiture controversy, he almost inevitably came into conflict with the Wittelsbachers , but because of his imperial relatives he successfully mediated the disputes between the Hohenstaufen , Babenbergs and Guelphs . At the request of Bernhard von Clairvaux , he also took an active part in the Second Crusade as a spiritual prince , but at the end of the crusade he only managed to escape with a small group of loyal followers. On behalf of Konrad III. he was also diplomatically active: Among other things, he made three trips to Rome , under Emperor Friedrich Barbarossa he was involved in the settlement of the dispute with Pope Hadrian IV . His ideal, also in piety, was moderation. Bernhard von Clairvaux remained deeply foreign to him throughout his life.

In 1157 Otto was officially commissioned by Emperor Friedrich Barbarossa to record the emperor's deeds ( Gesta Friderici Imperatoris ). Otto could no longer complete his work. He died on September 22, 1158 on the way to the General Chapter in Cîteaux in his former monastery Morimond . Otto was first buried in the monastery church of Morimond. Up until the 17th century, Otto von Freising's grave was raised above the ground and freely visible in front of the high altar there .

Today there is a reliquary with bones that are believed to be those of the Blessed, under the high altar in the collegiate church of Heiligenkreuz in the Vienna Woods .

In the history of philosophy Otto von Freising is considered to be one of the first to bring the new Aristotle to Germany. Only fragments of his literary work have survived. His philosophical writings and his correspondence were lost. As a Cistercian Otto was closely connected to the religious ideals and the intellectual world of his epoch; as a historian he created the outstanding works of early Staufer historiography . Due to his kinship with the imperial family, he was given a special insight into history and politics that was only given to a few of his contemporaries. Thus Otto is considered one of the greatest historians of the high Middle Ages .

His first work, the Chronica sive Historia de duabus civitatibus , d. H. The history of the two states is based on the work De civitate Dei by the church father Augustine of Hippo . It is a world history in 7 books, in the 8th book Otto unfolds his vision of the Last Judgment . Otto wrote this work between 1132 and 1146 and revised it again in 1157. The work became the high point of historiography in the Middle Ages: It is dedicated to the transformation of Augustinian and Platonic ideas, especially the two-state theory. The focus is on the world empires, which like all culture migrate from east to west and find their final form in the Roman Empire until the end of the world. It is crucial that the Ecclesia Christi connects with the Imperium Romanum and thus becomes the Civitas Dei , the perfect harmony of spiritual and worldly power. In contrast to that of St. Augustine , the Civitas Dei thus experiences a realization on earth. The meaning of the work lies in its historical-theological dimension, which Augustine 's doctrine of the two civitates clearly expands. A picture cycle conceived in the 12th century has survived in two early copies of the text.

Around 1156 Otto began the Gesta Friderici Imperatoris , d. H. The deeds of his nephew Emperor Friedrich Barbarossa . Under the impression of the hopeful government of the emperor, he wrote the first two books: Book 1 deals with the time from Heinrich IV. To Conrad III. , in contrast to the view in the Chronicon interpreted as the time of preparation for the coming imperial power under Friedrich Barbarossa. Book 2 describes Barbarossa's story from 1152 to 1158. Otto used here, partly literally, partly exclusively, many imperial files as a source . Otto could only finish the first two volumes. Even before his death (1158) he had wisely commissioned his student Rahewin to complete his work. Rahewin wrote the third and fourth volumes. Another successor was Otto von St. Blasien .

The Gesta are less deeply thought-provoking in terms of the philosophy of history, but convey the most vivid characteristics of personalities of church history, including Abelard and Arnold von Brescia . With regard to Barbarossa, the text is not free of subjective formulations. The presentation of the Hohenstaufen in particular is clearly linked to an objective that - in modern terms - could be called propagandistic. Otto wanted to portray the Staufen house in a light that predestined it to fulfill the divine will.

Otto has long been venerated as a blessed in the Cistercian order. His feast day in the Archdiocese of Vienna and in the Archdiocese of Munich-Freising has been September 7th with the approval of the Roman Congregation for Rites since 1973. A statue of the Blessed is in Freising Cathedral. Under the sacramental altar of the abbey church of the Cistercian Abbey of Heiligenkreuz there is a reliquary that is said to contain the bones of the blessed. A relic of Blessed Otto was placed in the celebration altar of St. Kastulus Minster in Moosburg . In 1995 a memorial stele was erected for him on the site of the former Morimond monastery . A bridge figure reminds of him on the Korbinian Bridge in Freising. He is often depicted in church windows, mostly as a writing bishop, such as in the Liesing parish church and the Otto von Freising chapel in Gaaden .

It is noteworthy that this blessed one enjoys greater veneration among historians and German scholars than among the Catholic people of his homeland. In this context, a memorial plaque dedicated to Blessed Otto was created in the Walhalla near Regensburg .