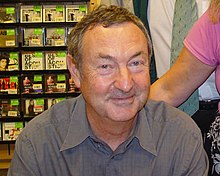 Nick Mason CBE (actually Nicholas Berkeley Mason ; born January 27, 1944 in Birmingham ) is a British musician . He gained fame as a founding member and drummer of the rock group Pink Floyd . He is the only member of the band featured on all of the band's albums. 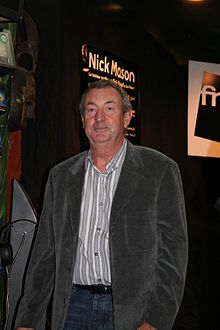 Nick Mason is the son of the documentary filmmaker Bill Mason (1915–2002). He grew up on Downshire Hill in London's exclusive Hampstead district. He received his education at Frensham Heights boarding school . At that time he took piano and violin lessons . Later he devoted himself more and more to the drums . After his boarding school, he enrolled to study architecture at Regent Street Polytechnic, where he met Roger Waters and Rick Wright . Together with them he founded the group The Abdabs in 1965 , from which Pink Floyd emerged after Syd Barrett joined in 1965/1966 .

Although he was never a virtuoso on his musical instrument , his distinct style left a clear mark on the music of Pink Floyd. Mason often used the tom toms on his drums. He also used gongs and leaning drums .

In pieces like Set the Controls for the Heart of the Sun his playing was crucial. With Obscured by Clouds , his drum sound was electronically supported, making the sound similar to that of a rhythm box. Another highlight is the opening sequence of Time . The 23-minute Echoes shows the song-serving side of his playing style and his sense of musical atmosphere. Tight, straight-line groove patterns as in the middle section alternate with fragile rhythmic figures performed exclusively on the cymbals, as they dominate the sacred organ section in the second half. The Pink Floyd album Animals , released in 1977, is another highlight. The drum parts on this album are so catchy that Graham Broad, the drummer of Roger Waters ' Bleeding Heart Band, faithfully reproduced the drum parts of Dogs (from the Animals album) on Waters' In the Flesh tour . 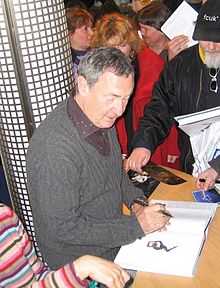 Nick Mason also emerged as a producer in the 1970s. He produced the albums of the English folk pantomime troupe Principal Edwards Magic Theater as well as the LP Rock Bottom by the former soft machine drummer Robert Wyatt . He also worked with the Anglo-French soft machine offshoots Gong and later also with their ex-guitarist Steve Hillage . The English punk pioneers The Damned also made use of his producer services.

After Mason and Roger Waters, who were previously friends, had hardly spoken to each other since Waters left the Pink Floyd group, they met by chance in 2000 while on vacation in the South Pacific. In the period that followed, the two of them renewed their friendship, and Mason has since appeared several times as a guest drummer at Roger Waters' concerts.

In October 2004, Mason's book Inside Out became. A Personal History of Pink Floyd published. While Mason says this book is a very subjective account of events surrounding Pink Floyd, critics consider it a humorous account of the history of a band.

On the occasion of the Live 8 concert in London in July 2005, the band played on one stage for the first time in over ten years - Roger Waters was also there, with the so-called "classic" line-up playing together for the first time since 1981. Mason, like Waters, showed repeated interest in further Pink Floyd activities. Gilmour, however, rejected such a request, but did not want to rule out further joint appearances at charity events.

During the recordings of the album A Momentary Lapse of Reason , Mason had been represented as a drummer by renowned studio drummers such as Jim Keltner and Carmine Appice - in his own opinion, due to the long break from Pink Floyd, he had lost too much of playing practice to record all drum tracks yourself in a satisfactory manner. Mason only played a part of the drum parts and also contributed sound effects, as on some previous Floyd albums. He was already replaced by Andy Newmark on the last album title Two Suns in the Sunset on the last album, The Final Cut , which was influenced by Waters . From then on, Mason was supported on tours by well-known percussionists such as Gary Wallis . First on the tour for the 1994 album The Division Bell (heard on the live album Pulse ) and most recently at the one-time reunion of the band on the occasion of Bob Geldof's Live 8 concert in London's Hyde Park (here again alone on drums without additional musicians) the joy of playing from earlier years flashed again.

In addition to guest appearances at some of Waters' solo concerts, Mason played on May 31, 2006 (as part of the conclusion of David Gilmour's solo tour , on which Richard Wright was part of the touring ensemble) and on May 10, 2007 (at a memorial concert for Syd Barrett ) together with his two current Pink Floyd colleagues.

On August 12, 2012 Mason interpreted the old Pink Floyd song "Wish You Were Here" together with Ed Sheeran , Richard Jones ( The Feeling ) and Mike Rutherford ( Genesis ) in front of the millions of people at the closing ceremony of the 2012 Summer Olympics in London .

Mason plays double bass drum sets . In the video Live at Pompeii he can be seen with his Ludwig drums in the Silver Sparkle color scheme , consisting of two bass drums , two hanging toms, two standing toms , snare , hi-hat , four cymbals and a gong . He used to use a Premier drum kit of the same size, but with one less cymbal.

Nick Mason is a second married to Annette Lynton, with whom he has two children. Two other children come from an earlier marriage with Lindy Rutter (1968–1988). 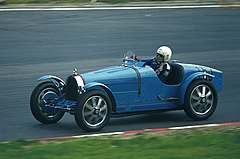 Nick Mason is a big fan of classic cars and old racing cars. He races himself. For example, in 1991 he took part in the Carrera Panamericana , a race in Mexico , with David Gilmour and Steve O'Rourke . This event is captured in the film La Carrera Panamericana , which has a Pink Floyd soundtrack. Nick Mason also competed five times as a driver in the 24 Hours of Le Mans . The best place was 18th place in 1979 on a Lola T297. Mason owns a large collection of different cars, including a Trabant , which Mason values ​​as "a very interesting vehicle historically". When the names of the buyers of the Ferrari Enzo were announced, which Ferrari only sold to selected personalities, Mason was among them. His favorite car in the collection, however, is supposedly an old clown's car from the circus, in which all four doors fall out at the push of a button, the seat falls back and the driver falls backwards out of the car so that the clown can run after the vehicle that drives on independently.

In the mid-1980s, he and Mike Hallowes founded Ten Tenths , a company that provides a wide range of automotive services.