Michael John Cleote Crawford "Mike" Rutherford (born October 2, 1950 in Guildford , Surrey ) is a British bassist , guitarist and songwriter for the bands Genesis and Mike & the Mechanics .

At the age of seven, Rutherford went to boarding school where he learned to play guitar over the years . When he was 14, he moved to the Charterhouse School and met his future bandmate Anthony Phillips . With him he founded the school band Anon , which later became part of Genesis.

From 1969 to 1997 Genesis produced numerous successful records for which Rutherford was often involved as a songwriter. In the progressive rock era of Genesis with Peter Gabriel as the singer, he was mainly responsible for the electric bass , but he also took on some rhythm guitar parts. Until the 1980s, he often used two-necked guitars (double neck) , which were equipped with an electric bass and an electric guitar. Rutherford is also known for using the bass pedal synthesizer Dewtron Mister Bassman (until 1975) and Moog Taurus (from 1976).

Although on his debut he was the only guitarist on ... And Then There Were Three on titles like Down and Out and Burning Rope , he mostly did without solos, which changed the character of Genesis music significantly because of the dominance of Tony Banks 'Nothing was opposed to keyboards anymore. For … And Then There Were Three , Banks is said to have written all the guitar solos himself, and Rutherford mixed them onto the basic tracks as a keyboard model so that he can then play them back note for note. The transition from guitar to keyboard solo can be seen well in Burning Rope , where you can practically hear how the two parallel sound tracks are exactly the same. Sometimes, like Abacab's title track , Rutherford composed additional guitar parts for the live versions, which made the tracks more and more interesting. So he also expanded his little solo on stage with Second Home by the Sea .

Peter Gabriel left Genesis as a singer in 1975. After Steve Hackett left as main guitarist (1977), Rutherford also took over the lead guitar at Genesis. In the studio he played both bass and guitar; At concerts, the band was reinforced by guitarist Daryl Stuermer , with whom he shares the work on bass and guitar. Usually Stuermer plays Hackett's material on lead guitar, while Rutherford plays bass or rhythm guitar. In the pieces from 1978 onwards, Rutherford mostly took over the guitar part himself, Stuermer switched to bass (but there are exceptions, for example Stuermer played the guitar in the live versions of The Lady Lies ). The more the old material (Hackett's demanding solos) disappeared from the Genesis repertoire, the more Rutherford and Stuermer shared the stage work on bass and guitar even with newer pieces.

In 1980 and 1982 Rutherford released two stylistically quite different solo albums, but they were not commercially successful. He also contributed the song Making a Big Mistake to the soundtrack of the film Against Every Chance . The title, sung by Rutherford himself, was released as the B-side of various singles on the soundtrack album, including a. with Against All Odds (Take a Look at Me Now) by Phil Collins or Walk Thru the Fire by Peter Gabriel. He also produced the 1985 debut album of the band Red 7 , whose singer Gene Stashuk also appears on the first Mechanics album. 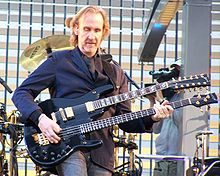 After numerous speculations about a Genesis reunion, Rutherford, Collins and Banks announced a joint world tour for 2007 at a press conference on November 7, 2006 - just in time for the band's 40th anniversary. After the tour, Genesis de facto dissolved.

In April 2011 another album with Mike & the Mechanics was released under the title The Road .

Rutherford has been married to Angie Rutherford, a former dressage rider, since November 13, 1976 and lives in Chiddingfold , southern England. He is also a polo player with a handicap of 0.

Due to his playing technique in the 1970s, Rutherford is recognized as a bassist in the progressive rock environment . His guitar playing, on the other hand, is characterized by concise riffs like in the pieces Land of Confusion , Turn It On Again or Abacab and the renunciation of finger-ready guitar solos . In addition to six-string electric guitars , Rutherford also plays 12-string acoustic instruments in pieces such as Supper's Ready and The Cinema Show . He also uses bass pedals to play guitar and bass simultaneously .

At concerts, in addition to conventional instruments, he also uses a double-necked instrument, which consists of a bass and 12-string guitar.

Rutherford mainly plays Rickenbacker and Shergold bass guitars . Together with the English guitar maker Roger Giffin, he developed the Steinberger M series, which he preferred to use in the 1980s and during the Invisible Touch tour with Genesis.