The three excircles belong to the district and the inscribed circle to the special circles of a triangle that already in the ancient times were studied by Greek mathematicians.

it stands for the area and for half the circumference of the triangle .

The radii and the two other circles are calculated in the same way .

If one expresses the area according to Heron's theorem by the lengths of the sides, one obtains

The same applies to the other two arrivals 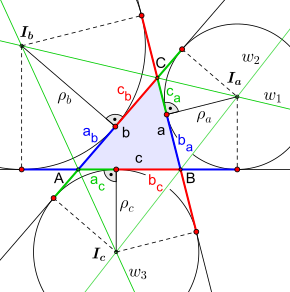 The index means that the circle is considered that touches the side in the triangle and not in the extension. The designation for the other two circles is chosen in the same way.

Here is half the circumference of the triangle.

If you add a side length with a contact point distance of the circle on the side extension, this results

The centers of the circles on their respective sides have the following barycentric coordinates, with the center of the circle representing side a:

Construction of the circle centers 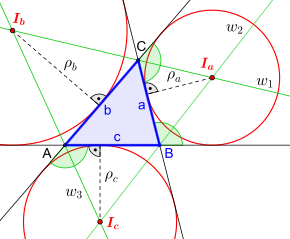 Triangle, construction of the circle centers

The following can be concluded from the introduction and the triangle with circles (red) above . The three center points of the circle can also be found solely by halving three outer angles which, as angle legs, each have one side and an extension of an adjacent side.