Schönwald is a town in the Upper Franconian district of Wunsiedel in the Fichtel Mountains , on the border with the Czech Republic . The closest regional center is Selb , together with the nearby Czech city of Aš .

The city of Schönwald is located in the northeastern part of Bavaria ; to the border triangle Bayern- Sachsen -Tschechien there are only about 15 km away, the border triangle Bavaria-Saxony- Thuringia km 25 and the Czech border five kilometers in a straight line . It is the northernmost town in the district, about 20 kilometers separate it from Wunsiedel and 45 from Bayreuth . The state capital Munich is 230 kilometers away.

Schönwald forms the northern cornerstone of the horseshoe-shaped Fichtelgebirge . The city's local mountain is the Great Kornberg . In the district of Reichenbach , the Lohbach and the Lauterbach become the Perlenbach , which continues to flow northwest and flows into the Schwesnitz in Rehau . Large parts of the urban area are forest areas.

Selb and its district of Vielitz are located southeast of Schönwald, while Rehau is to the north. Schwarzenbach an der Saale borders the opposite side of the Kornberg, and Marktleuthen and Kirchenlamitz are ten kilometers to the southwest . In the northeast is Aš on the Czech side .

The city of Schönwald is divided into 16 districts:

With the Kornberg there is a granite stock made of hard core granite in Schönwald's surroundings. Schönwald itself lies in a strip of mica slate running diagonally from southwest to northeast on the Cambrian strata. Quartzite can be found below the Rabenberg . A smaller strip of gneiss connects to the south, which includes the Selber districts of Erkersreuth and Vielitz. In the north there is a phyllite area with Pilgramsreuth and Rehau. This rock originated from the Phycode series, under the Silurian Frauenbach layers on both sides and sandy slates. The rock Steinriesl near the Perlenhaus is also made of phyllite.

Overall, the Schönwald soil can be described as low in lime and nitrogen, as well as impermeable to water and cold. 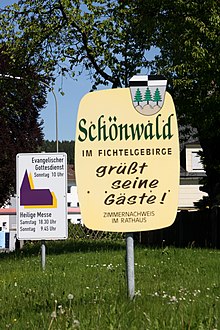 Welcome signs at the entrance to Schönwald

The meaning of the city name has not been conclusively clarified. The meaning of beautiful forest is obvious . As early as 1316 the name was handed down as "Scho (e) nwalde", 1360-1370 as "Schoenenwald", 1418 as Schönwaldt and 1421 as Schönwald . Wolf-Armin von Reitzenstein concludes from this that in Middle High German it was actually a beautiful forest, i.e. a well usable forest. Another interpretation refers to the designation of the place as "Schonwald" in the early years, or as "Schonwalde" in the years 1412, 1437 and 1442 and as "Schonnwaldt", "Schonwald" and "Schonwalt" in the land register of the six offices from 1499. An attempt to explain it is the establishment of a farm on the edge of the forest of the Großer Kornberg in the course of extensive clearing , which was occupied by a forest ranger to protect the forest. This very farm was probably called "Zum Schonwalde"; in the case of Schönwald, it is a matter of a settlement near the protected forest.

There were first signs of settlement in the 12th century: Around 1125/32 the Margrave Diepold III. von Vohburg the Benediktbeuern monastery a forest area that stretched between "Vilice" (Vielitz) and "Swirznice" (the Schwesnitz , or today's Perlenbach ) and thus also included Schönwald. The Haselbach between Vielitz and Brunn (“Coselbach”) in the south and the Tännigbach (“Spantanne”) in the south can be conjectured as the boundaries of this area later called “Schönwalder Forest” . The document also mentions that the forest extended "70 feet" beyond the Perlenbach; this roughly corresponds to today's Schönwalder urban area. Probably Diepold III wanted. found a Benedictine monastery in this area .

With the death of the margrave in 1146, the area fell back to the empire; the emergency forestry held the office of forester. A first written reference exists from 1316, when Fritz Forster the monastery Waldsassen gave his court; a manor must have been founded earlier. If the area originally belonged to the Egerland , at the beginning of the 15th century it was transferred to the Burgraviate of Nuremberg ; a decades-long conflict broke out between the two parties. In 1412 the Forster sold Schönwald with all other possessions to the burgrave Johann III. In 1417 the Schönwalder manor was owned by Hans Thoss , but Conrad von Aufseß wanted it too. In 1420 King Siegmund of Bohemia handed over Schönwald to Reinhard and Margarete Weiß, daughter of Hans Thoß, as a fiefdom of the Egerland. When the Kneussel estate and village received a loan from the margrave in 1437, the disputes were over.

From 1465 to 1622 Schönwald belonged to the Lords of Thela . In the following years the owners changed often: First the village passed to the Brandenburg-Kulmbach chamberlain Balthasar Friedrich Rab, in 1696 to the councilor Jobst Bernhard von Lindenfels and in 1711 to the councilor Wolf Christof von Schmid.

Around 1777 the knight's seat moved from the palace next to the Protestant church to the newly built palace in Sophienreuth . The Margraviate of Ansbach-Bayreuth became part of the Kingdom of Prussia in 1791 . After four years of French military administration, the place became part of the Kingdom of Bavaria in 1810 . In 1818 Göringsreuth, Grünauer Vorwerk, Grünauer Mühle, Grünhaid, Kleppermühle and Sophienreuth joined together with the main town to form the political community of Schönwald.

The village, which was previously characterized by the weaving trade , quickly developed into a workers' place through industrialization , especially through the porcelain factory built in 1879. It was raised to the market in 1938.

In the Second World War , Schönwald was largely spared from fighting. It was not until April 19, 1945 that artillery bombardment came about by the US 358th Infantry Regiment, 90th Infantry Division. The fighting, which lasted from morning to afternoon with the exception of a lunch break, resulted in various damage to buildings and factories as well as the death of three people. This was followed by the occupation by American troops, which was initially accompanied by severe restrictions (e.g. curfews ) in public life for the citizens . In the next few months there was a military government in Schönwald with the temporarily appointed German mayor Gustav Arnold, who handed over his official duties on June 20, 1945 to the first "regular" mayor Heinrich Voigt. Some troops withdrew in September 1945.

On May 17, 1954, the Bavarian Minister of the Interior and Deputy Prime Minister Wilhelm Hoegner Schönwald granted city rights .

On January 1, 1978, parts of the dissolved communities Lauterbach and Vielitz were incorporated. 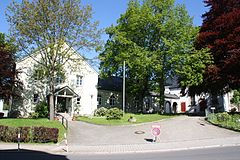 The Evangelical parish of Schönwald is located in Schönwald, to which the parishes of Schönwald and Spielberg are subordinate. She is part of the Deanery Selb . In 2012 the parish of Schönwald had 2098 members. It has a kindergarten and a day care center. Tilla Noack has been the pastor since August 2012, and Elke Pröbstl is currently the second pastor.

On the Catholic side there is the parish of St. Marien Schönwald, which, in addition to its main town, also extends over parts of Selb (Heidelheim, Lauterbach, Selb-Plößberg, Spielberg and Vielitz) and Rehaus (Neuhausen). It is the northernmost parish in the diocese of Regensburg and has the subsidiary community of St. Josef Selb-Plößberg. The Schönwalder parish has a kindergarten and the Kolping youth. Until 2008 she also had a nurses' station with nuns of the Sisters of the Divine Redeemer . The pastor's office is held by John Arolichalil from India.

In Schönwald there is an ecumenical care service that is supported by the parishes of both denominations. Most of the Turkish Muslims belong to the Turkish-Islamic community of Selb.

The city council has 16 members.

With the receipt of the market status in 1938 Schönwald was awarded a coat of arms. The blazon reads: "Under the silver and black quartered shield head in silver on a green three-hill standing side by side three green conifers." The fourth shield head indicates the former rule of the Margraviate Brandenburg-Bayreuth. The three hills refer to the location of Schönwald in the Fichtel Mountains, the spruces to the tree species of the forest there.

The twin town has been Pusignan in the French department of Rhône since 1984 ; The schools in question have been friends with each other since 1986. The association for the maintenance of Franco-German relations regularly organizes trips to Pusignan.

In Schönwald there are several groups and music associations, including the brass band De Kreabröihmusikanten and the mountain and folk costume association Alpenrose , which regularly organizes folk music concerts. The various church choirs also contribute to musical life: the Catholic parish has a schola, the Protestant parish has a trombone choir, the church choir Laudate and the youth choir Inspiration . In addition, some of the lessons at the Selber Music School take place in Schönwald.

View of the station park

Due to its location in rural areas, Schönwald is surrounded by forest, arable and meadow areas, which results in numerous hiking opportunities in the vicinity, especially on the Kornberg. In addition to the rather small size of the town, this also explains why Schönwald does not have any large parks . Popular excursion destinations in the immediate vicinity of the city are the Sophienreuth Palace and the Kleppermühle , the ponds in the Au near Neuenbrand, the Altes Pfarrhaus restaurant in the forest on the Göringsreuth and the area around the Merzenhaus.

There is a small leisure park on the Grünhaid and a heated outdoor pool in the nearby Perlenbachtal. The slope of the Kornberg can be used for cross-country skiing and skiing in winter.

The Schönwald football clubs include 1. FC Schönwald and SC Grünhaid, each of which has its own football pitch. The SC Grünhaid also has a table tennis section . TV Schönwald covers the disciplines badminton , handball , Nordic walking , judo , athletics , table tennis and gymnastics . There is also a sports fishing club, a bowling club, a chess club, a shooting club as well as a disabled and disabled sports club in town.

The place is known for the Schönwald porcelain factory, which has been located there for over 125 years . The Bavarian Porcelain Route runs through the town. 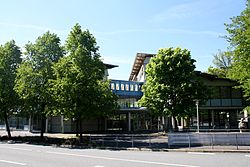 In the village there is the Schönwald elementary school , a primary school from the 1st to the 4th grade. Some courses of the Marktredwitz adult education center also take place in the rooms . The primary school has a partnership with the Ascher Základní škola. There is also a city library in the school building. The elementary and partial secondary school was built according to plans by the Nuremberg architects Niederwöhrmeier + Kief .

The city belongs to the cross-border microregion Friends in the heart of Europe .

Personalities who have worked in Schönwald

Municipalities in the district of Wunsiedel in the Fichtel Mountains