The former German federal motorway 104 (abbreviation: BAB 104 ) - short form: Autobahn 104 (abbreviation: A 104 ) - connected the Berlin city ring (A 100) from the former Wilmersdorf junction with the Berlin district of Steglitz . An originally planned extension of Schildhornstrasse to A 103 is no longer being pursued. Since 2006, the A 104 is a branch of the A 100 and between junctions Mecklenburg Street and Schildhornstraße for trucks blocked -Transport of dangerous goods. 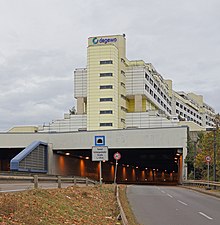 Between the junction of Mecklenburgische Straße and Breitenbachplatz , the motorway runs through a listed building that was built around the motorway in the West Berlin period between 1976 and 1981 with the extreme lack of building land. The Autobahn overbuilding in Schlangenbader Strasse is popularly known as the "snake" for short. The tunnel is around 600 meters long and cost the city's own housing association Degewo over 200 million euros. The “snake” encloses the entire width of the motorway, while the route runs through the facility on the second and third floors. There is an independent three-lane tube available for each direction of travel, each completely separated from the residential units and elastically supported on rubber bearings. The parking decks of the residential complex are located below the routes.

The former A 104 was downgraded to a branch of the A 100 on January 1, 2006 and therefore no longer has its own number that identifies it as an independent federal motorway. The road is now run as a section (Steglitz junction) of the A 100 according to the Federal Highway Act . In the area of ​​the last approx. 1384 meter long section between the interconnections Mecklenburgische Straße and Schildhornstraße ( kilometers 1.210 to 2.594) including the Schlangenbader Straße (ÜBS) building, the former A 104 was replaced in accordance with Section 2 Paragraphs 4 and 6 of the Federal Highway Act with effect from 25 2006. March street 1st order with freeway character graded according to the Berliner Straße law and therefore is in the public easement of Berlin.

From the A 100 only the directions Mecklenburgische Straße and Schmargendorf are signposted. A reference to Steglitz is missing. This is intended to lead to as little traffic as possible to the Schildhornstraße that one of the most with fine dust is polluted streets of Berlin. If you follow the course of the Schildhornstraße to the southeast after leaving the A 104, you cross Schloßstraße directly at the Bierpinsel and reach the A 103 at the Filandastraße exit . This exit can also be reached by driving on the A 100 in the south-east direction to the Schöneberg junction and then changing to the A 103 in the direction of Steglitz. Despite the detour, this fast route is often used by truck traffic, which is not allowed to drive on the former A 104 due to the blockage for trucks with dangerous goods.

From 1975 until German reunification , the autobahn was called A 14 .