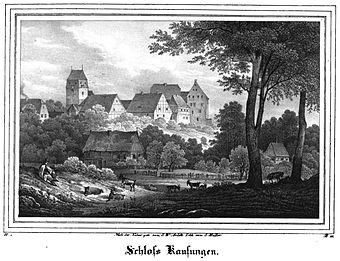 Limbach-Oberfrohna is a large district town in the district of Zwickau in the southwest of the Free State of Saxony , which was formed on July 1, 1950 by the merger of the cities of Limbach and Oberfrohna . Limbach won the 1883 city law , Oberfrohna 1935. With the neighboring community Niederfrohna is an administrative community .

Limbach-Oberfrohna is naturally part of the border area between the central Saxon hill country and the Erzgebirge foothills or the Erzgebirge basin in the south-western part of Saxony. The densely wooded ridge of the Rabensteiner Forest runs to the south or south-east of the city as the northern branch of the Erzgebirge foothills. The urban area is part of this in the area of ​​the district boundary to Chemnitz-Grüna via the district Pleißa . There are heights of over 400  m above sea level. NN reached.

Furthermore, Limbach-Oberfrohna is traversed by a number of smaller streams - u. a. Pleißenbach , Frohnbach - which partly drain in the direction of Zwickauer Mulde (Frohnbach), partly in the direction of Chemnitz (Pleißenbach). The Zwickauer Mulde is the only major river that flows through the Wolkenburg-Kaufungen district when coming from Waldenburg.

Limbach-Oberfrohna extends over an area of ​​50.17 km². The urban area extends from the state border with Thuringia to the eastern neighboring city of Chemnitz over a distance of about 13 km.

Limbach is the easternmost of the three core city districts. It is located north of the Limbacher Teiche nature reserve , the largest of which is the Great Pond . In 1248 a Johannes de Limpach and in 1348 the parish were first mentioned. On January 1, 1883, the village received city rights. On July 1, 1950, it was united with Oberfrohna by SED resolution to form Limbach-Oberfrohna.

The place is between Rußdorf in the west and Limbach in the east. Oberfrohna was mentioned for the first time in 1415 as Querchfrohne . In 1935 both the incorporation of Rußdorf and the granting of city rights took place. On July 1, 1950, Oberfrohna was forcibly united with the neighboring town of Limbach to form the twin town of Limbach-Oberfrohna.

Rußdorf is located on the border with Callenberg in the west of the city area. The village was first mentioned in 1335. The place was formerly partly an exclave of Saxony-Altenburg , later of the state of Thuringia in Saxony . By means of a state treaty in 1928, the Thuringian parts of the town became part of Saxony in a territorial exchange. On March 31, 1935, Russdorf was incorporated into Oberfrohna and has been a district of Limbach-Oberfrohna since 1950.

K Kaufmann was mentioned for the first time in 1375. The place name is derived from the traditional “keeneln” (old German for felled trunks sliding down the slope ). On January 1, 1999, it was incorporated into Limbach-Oberfrohna.

Pleißa was mentioned for the first time on December 13, 1375. On January 1, 1999, it was incorporated into Limbach-Oberfrohna.

With the incorporation of Bräunsdorf, Kellers and Pleißa, the urban area grew to 33.12 km². Falko Weißpflog is a well-known personality from Pleißa. 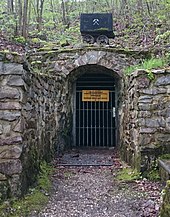 Entrance to the St. Anna visitor mine in Wolkenburg-Kaufungen 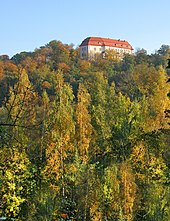 Kaufungen was first mentioned in a document in 1226, at Wolkenburg this was in 1241. Ullrichsberg (or Ullersberg),located between Herrnsdorf, Uhlsdorf and Niederwinkel,is one of the earliest mining locations in what is now the Free State of Saxony. The remains of a pingen field andwhat isnow a desolate settlement of miners were archaeologically dated to the end of the 13th or the beginning of the 14th century in the early 1990s. Mining was first mentioned in a document in January 1351, when Margrave Friedrich III., The Strict , agreedwith the brothers Volrad and Busso von Colditz about the exercise of minting rights in Wolkenburg. Copper, lead and silver were mined at Ullrichsberg with interruptions until the end of the 18th century. Since 1980, two tunnels (Blessing of God near Niederwinkel and St. Anna near Herrnsdorf) have been reopened to the public as visitor mines through a working group.

Wolkenburg / Mulde and Kaufungen only merged into one municipality in 1994. The three districts of Herrnsdorf, Uhlsdorf and Dürrengerbisdorf belong to Wolkenburg-Kaufungen . On January 1, 2000, the municipality was incorporated into the city of Limbach-Oberfrohna after a failed administrative partnership with Waldenburg.

Towards the end of the Second World War from August 1944 to April 13, 1945 there was a women's subcamp of the Flossenbürg concentration camp in the district of Wolkenburg , in which around 400 women had to do forced labor for Opta-Radio AG Leipzig . Seven women succumbed to the inhumane living conditions.

Well-known buildings are the Wolkenburg Castle and the St. Mauritius Church in Wolkenburg. The Bergamtshaus, mentioned for the first time in 1613, is currently being restored in the Herrnsdorf district.

The twin town of Limbach-Oberfrohna was created on July 1, 1950 through the union of the two towns of Limbach and Oberfrohna. The still young city was incorporated into the district of Chemnitz, then Karl-Marx-Stadt-Land , which was located in the GDR district of the same name , as part of the 1952 territorial reform .

During the GDR era, the Clara Zetkin pioneer holiday camp was set up, where West German children could also go on holiday.

After the reunification , the associated district continued to exist as the district of Chemnitz in the re-established Free State of Saxony. On October 1, 1994 Limbach-Oberfrohna received the special status of a large district town .

On January 1, 2000 the administrative community with Niederfrohna was formed.

The respective territorial status of the municipality

Territory of the municipality since the 2010s

The local elections on May 26, 2019 resulted in the following distribution of seats in the Limbach-Oberfrohna city council:

In June 2015, Jesko Vogel was elected as the new mayor . He replaced Hans-Christian Rickauer.

There are the following churches in Limbach-Oberfrohna:

Limbach-Oberfrohna has a long industrial tradition. The city is best known for its former textile industry . Heinrich Mauersberger developed the Malimo textile process in the city . The tradition of the textile industry is continued even after the fall of the Wall (e.g. Riedel Textil GmbH with more than 200 employees), but after the unification-related slumps the employment effect is well below the level of before 1989. The commercial tradition of the location is represented by new industries For example, by Continental Automotive GmbH (formerly Siemens VDO Automotive ), Aumann GmbH (formerly USK Karl Utz Sondermaschinen GmbH) and light industry companies such as Warema Sonnenschutztechnik, continued in other ways. Most of these companies or investors in the city settled in the newly created industrial and commercial areas in and around the city after the political, social and economic upheavals of 1989/1990 . This development was the result of the gradual abandonment of traditional factory locations spread across the city, which were no longer competitive after 1990 - in the course of the unification of the two German states and the collapse of the previous sales markets. The following industrial and commercial areas exist in the area of ​​the twin city (status at the end of 2014):

Limbach-Oberfrohna is affected to the south by the federal motorway 4 , the city can be reached via its own exit and the Wüstenbrand exit. Via the exits Chemnitz-Röhrsdorf and Hartmannsdorf, the city is connected to the federal autobahn 72 that runs past to the east . The north extension of the federal motorway 72 enables a fast connection in the direction of Leipzig through three construction sections approved in the years 2006-2013 . Furthermore, the Glauchau - Penig section of the regionally important federal highway 175 crosses the northwestern district of Wolkenburg-Kaufungen.

The Wittgensdorf – Limbach and Limbach – Oberfrohna railway lines running through the city were closed in 2000. The Limbach – Wüstenbrand railway line was shut down in 1950. On the Glauchau – Wechselburg line leading through the Wolkenburg district , traffic was suspended after the Mulde flood in 2002 .

As part of the Chemnitz model , Limbach-Oberfrohna is to be connected to the Chemnitz Stadtbahn via parts of the disused Wittgensdorf – Oberfrohna railway line. The plans of the cities of Limbach-Oberfrohna and Chemnitz have been planning a route via KÄNDER and Chemnitz-Röhrsdorf to Chemnitz-Zentrum since 2003 , but have not yet been specified. It is uncertain whether and when it will be commissioned; the long-term date 2019 is now considered unlikely. The cost of the project is estimated at around 90 million euros, of which 60 percent will be borne by the federal government, 25 percent by the Free State and 15 percent by the Central Saxony Transport Association. In July 2012 it became known that the German Regional Railway also wanted to examine the renewed railway operation between Oberfrohna and Kellers .

Local public transport in the city of Limbach-Oberfrohna is operated by buses. Since December 11, 2005, the express bus route 526 has been running between Chemnitz , Limbach and Oberfrohna with three stops in Limbach-Oberfrohna and three more in downtown Chemnitz. A special feature is the route over the federal motorway 4 . In addition to other overland routes from Regiobus Mittelachsen GmbH and Regionalverkehr Erzgebirge GmbH, minibuses (called Citybus ) from Fritzsche GmbH also operate on two city routes. With a view to a possible implementation of the Chemnitz model, Fritzsche GmbH is currently planning the option of a central bus station in Limbach-Oberfrohna.

There are a number of different educational institutions in Limbach-Oberfrohna.