Oberwiesenthal (since May 29, 1935 Oberwiesenthal health resort ) at the foot of the Fichtelberg is 915  m above sea level. NHN the highest town in Germany and the winter sports resort in the Ore Mountains with the most overnight stays. The city bears the title of a state-recognized health resort .

Oberwiesenthal lies on the ridge of the Middle Ore Mountains in the Ore Mountains District , on the border with the Czech Republic , which follows the course of the Pöhlbach to Bärenstein (10 km northeast) .

Significant mountains in the vicinity of Oberwiesenthal are:

Oberwiesenthal with Fichtelberg from the opposite Czech side (cemetery near Háj)

From left: Böhmisch, Ober- and Unterwiesenthal (1848)

Drawing by Oberwiesenthal with Fichtelberg (1879) 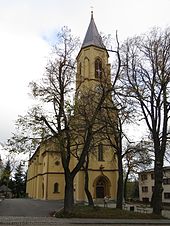 Today's Oberwiesenthal district of the Oberwiesenthal health resort was given mountain freedom as Wyssenthal on March 19, 1527 by Duke Georg von Sachsen for a period of six years, after silver ore had been found in the upper mine ground in 1525. The condition was that the extracted silver be delivered to the Annaberger Mint. On March 22, 1527 the Lords of Schönburg granted the miners' settlement additional rights. The granted mountain freedoms were extended by the respective Duke / Elector of Saxony at regular intervals until 1570. On April 18, 1570, the community of Wiesenthal ( poor community of the Pergk Stedlin Neustadt Wiesenthal ) asked Elector August again for mountain freedom and the establishment of a free market. However, the community only received the right to a free market and its own court, and thus city rights, through Duke Christian von Sachsen on July 25, 1588. In addition to the new mining town of Oberwiesenthal , the community in Alten Undern Wiesenthal is also mentioned here. Altwiesenthal , now known as Unterwiesenthal, to the east of Neustadt Wiesenthal , was mentioned in a document as Wizinthal as early as 1406 . Both places were jointly referred to as Deutsch Wiesenthal , in contrast to the Bohemian Wiesenthal on the other side of the Pöhlbach . Around 1650, both places saw an influx of Protestant exiles who had to leave the Kingdom of Bohemia as a result of the Counter-Reformation and found a new home across the border. To the north of Unterwiesenthal, the Hammerunterwiesenthal settlement was established in 1657 by the settlement of exiles.

At that time, Oberwiesenthal and Unterwiesenthal belonged to the upper county of Hartenstein , which had been part of the Schoenburg rule since 1416 and belonged to the Albertine line of the Wettins since the Leipzig division in 1485 . The red and silver shield of the Lords of Schönburg in the coat of arms of Oberwiesenthal comes from this lordship. In 1539/40 the Reformation was introduced in the county of Hartenstein and thus also in the old and new town of Wiesenthal . With the sale of the upper part of the County of Hartenstein to the Wettins, the old and new towns of Wiesenthal were incorporated into the newly founded Electoral Saxon Office of Crottendorf on May 2, 1559 . From the beginning, this was administratively closely related to the neighboring Schwarzenberg district office , with which it was finally united in 1670. In 1832 the Schwarzenberg district office was reorganized. From the south-eastern part of the office around Oberwiesenthal and neighboring places, a judicial and rent office in Oberwiesenthal was formed under the name Office Wiesenthal and Court Wiesenthal.

Mining came to a standstill in the 19th century. After the transition into the 20th century, tourism increasingly took its place. The Cranzahl – Kurort Oberwiesenthal narrow-gauge railway , which opened on July 19, 1897, was also used to develop the Fichtelberg region. In Cranzahl it is connected to the Weipert – Annaberg standard-gauge railway line and is now operated under the name “Fichtelbergbahn”. The number of visitors also increased on the Fichtelberg with the opening of the first Fichtelberghaus in 1888 and the Fichtelberg suspension railway in 1924.

20th century to the present

After the Second World War , the occupying power of the Soviet Union attempted to find uranium ore for nuclear armament in the Zechengrund - a nature reserve since the 1990s . The tracks are still visible. In the period after 1950, Oberwiesenthal developed into a center of winter sports as the venue for various competitions and the construction of winter sports facilities. After the Fichtelberghaus was destroyed by a major fire in 1963, a modern building with a 42 meter high observation tower was built on the summit in 1967. In 1981 the residential area at Sparingberg, which had been built on with prefabricated buildings, was handed over.

With the rise in raw material prices, the extraction of raw materials in the deposit on river and barite located in Hammerunterwiesenthal on the local border with precipitation became economically interesting. On March 4, 2008, the Saxon Mining Authority granted the “Erzgebirgische Fluss- und Schwerspatwerke GmbH” a license in accordance with Section 8 of the Federal Mining Act (BBergG) for the extraction of fluorspar and heavy spar. On November 8, 2013, the mine was officially opened after a two-week trial run. The mine has been in regular operation since 2015.

The original coat of arms of Neustadt Wiesenthal, later Oberwiesenthal, shows the red and silver shield of the Lords of Schönburg, which is held by two miners in white miners' costume. Underneath you can see the miners “ tough work ”. Everything is spanned by a rainbow with God the Father on the globe.

After the voluntary unification of the cities of Oberwiesenthal and Unterwiesenthal on September 1, 1921, the city now called "Oberwiesenthal" received a new coat of arms, which is a combination of the two previous coats of arms of the districts. The two left parts, which u. a. contain a cross with flanking clover leaves, were taken from the Unterwiesenthal court seal. The right side with the red and silver shield of the Schönburgers and the tough miners comes from the earlier Oberwiesenthal city arms.

Since the municipal council election on May 26, 2019 , the 14 seats of the city council have been distributed among the individual groups as follows:

In January 2002, Heinz-Michael Kirsten (CDU) was re-elected mayor. As early as February 2002, the Annaberg District Office declared this election invalid because of inadmissible election advertising. This resulted in a five-year legal dispute by all instances, which only ended in 2007 with a judgment by the Federal Administrative Court of Leipzig, which confirmed and declared the judgment of the Bautzen Higher Administrative Court in February 2007, according to which the 2002 mayoral election was invalid. Heinz-Michael Kirsten was then given leave of absence from the regional council. A new election took place on November 4, 2007, in which no applicant achieved an absolute majority. In the second ballot on November 18, the non-party Mirko Ernst (now FDP) was elected mayor.

In 2014 Mirko Ernst was re-elected as mayor. 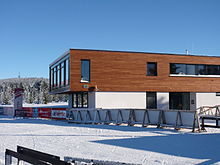 There is a road border crossing to the neighboring Czech Republic, where the Silnice 25 begins via Jáchymov to Ostrov . From there you can reach the traditional spa town of Karlovy Vary via Silnice 13 / Europastraße 442, which has been extended in sections to several lanes .

Since 1897 Germany's highest town can be reached with the steam-powered Fichtelbergbahn .

Since 1897 there has been a rail connection to the steam-powered narrow - gauge railway Cranzahl-Kurort Oberwiesenthal (known under the marketing name Fichtelbergbahn ).

The route is scheduled and has been operated by the Saxon Steam Railway Company since 2007 . In the urban area, the trains serve the stations precipitation, Hammerunterwiesenthal, Unter- and Oberwiesenthal. At the northern end of the route there is a possibility of transition to the DB regional network of the Erzgebirge Railway ( Vejprty – Annaberg-Buchholz route ).

→ Main article : List of personalities from the Oberwiesenthal health resort

Cities and municipalities in the Erzgebirgskreis

Parts of the municipality of Kurort Oberwiesenthal