The Erzgebirgskreis has been a district in the Saxon Ore Mountains since August 1st, 2008 . The district town of the Erzgebirge is Annaberg-Buchholz . It is the most populous district in Saxony.

Center of the Erzgebirge in Tannenberg

The district encompasses almost the entire Saxon West and Middle Ore Mountains , from the ridge region on the German-Czech state border to the transition to the Ore Mountains basin between the cities of Chemnitz and Zwickau .

The highest point of the Erzgebirge and at the same time Saxony is at 1215  m above sea level. HN the Fichtelberg .

Two larger rivers of the Western Ore Mountains, the Zschopau and the Schwarzwasser, also arise on its slopes .

Other important rivers that run through the district are the Zwickauer Mulde , the largest flowing water, and the Flöha , which forms the geomorphological border to the Eastern Ore Mountains in the east .

The Eibenstock dam is the largest standing body of water .

In the more densely populated west and north, the Erzgebirgskreis borders clockwise on the Vogtlandkreis , the district of Zwickau and the independent city of Chemnitz, in the less populated east and south on the district of Central Saxony and the Ústí region and the Karlsbad region in the Czech Republic .

Annaberg-Buchholz is the seat of the Erzgebirgskreis

As part of the administrative reform of the state authorities , a Saxon district reform took place on August 1, 2008 , in which the districts of Aue-Schwarzenberg , Annaberg , Stollberg and Mittlerer Erzgebirgskreis with their at that time a total of 28 cities and 43 municipalities were merged into one Erzgebirgskreis.

In order to offer the former district towns a compensation for the loss of the district seat , it was made possible for them, like other towns in the earlier Saxon district area reforms, to be appointed major district town without the actually necessary minimum number of inhabitants. In addition, after the reform, the locations of various units and departments in the newly formed district in Aue as well as in Marienberg and Stollberg were retained, their function as administrative centers with corresponding jobs and purchasing power secured, and short distances for the citizens maintained.

The district election of the Erzgebirgskreis took place on June 8th, 2008. In the first ballot, every applicant failed to achieve the required absolute majority, so that a runoff election on June 22, 2008 had to be held. In the second ballot, Frank Vogel (CDU) prevailed against his four competitors with 55.8 percent of the valid votes. He took office on August 1, 2008. On June 7, 2015, Vogel was re-elected with 58.7 percent of the valid votes.

Blazon : "In gold over a green mountain, in which a silver mallet and a silver iron crossed diagonally, striding, a red armored and tongued black lion."

On November 27, 2008, the district council voted for a design by the Weimar heraldist Michael Zapfe. This draft can be used as a coat of arms, after heraldic examination by the main state archive in Dresden and confirmation by the Chemnitz regional directorate , since December 18, 2008. A similar draft with a black background in the lower area had previously been rejected by the district council.

The black lion on a golden background is supposed to symbolize the margraviate of Meißen , to whose domain the area of ​​the Erzgebirgskreis belonged. However, the coat of arms of the Erzgebirgskreis is not a Meißner lion , as it was designed to lie down and not upright. In the lower area there are sticks and irons for the mining industry, which gave the Erzgebirge its name and importance. The gently curved, green background symbolizes the densely forested mountains.

See also : List of coats of arms in the Erzgebirgskreis

The Erzgebirgskreis has six partnerships:

As a result of the centuries of mining, the Ore Mountains District developed a disproportionately high industrial density compared to the whole of Saxony. Around 30 percent of all employees work in industry with a focus on toolmaking , mechanical engineering and electrical engineering. Another characteristic of the economic structure, which is mainly characterized by small and medium-sized companies, is a wide variety of industries . Branches of the economy such as handicrafts and services also form strong pillars. Tourism also plays an important role in the Erzgebirge district and, in terms of external perception, the manufacture of wood art , which only employs a good 1 percent of all employed people.

In the Future Atlas 2016 , the Erzgebirgskreis was ranked 368th out of 402 rural districts and urban districts in Germany, making it one of the regions with "high future risks". 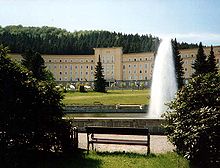 Listed building of the Erlabrunn clinics

The EKH Erzgebirgische Krankenhaus- und Hospitalgesellschaft mbH operated the oncological specialist hospital Marienstift Schwarzenberg, now there is only the Marienstift health and care center in Schwarzenberg.

The most important traffic axes in the Ore Mountains are the federal roads. In the west-east direction it opens up in particular the B 101 , but also the B 171 , the B 180 and the B 283 . From north to south there are the B 93 , B 95 , B 169 and B 174 that connect the region with the regional centers of Chemnitz and Zwickau. With the between Oelsnitz / Erzgeb. and Neukirchen / Erzgeb. However, through the A 72 leading to the north-west of the district , the region is also directly connected to the motorway network. For traffic in the neighboring Czech Republic, there are border crossings approved for motor vehicles in Johanngeorgenstadt , Oberwiesenthal , Bärenstein , in the Marienberg district of Reitzenhain and in Deutschneudorf .

The railway traffic in the district is operated on four regional railway lines by the Erzgebirgsbahn and on two lines by the City-Bahn Chemnitz . The routes mostly run along the valleys and connect the region with the Chemnitz-Zwickau agglomeration . In addition to these standard-gauge railways, there is the Fichtelbergbahn, a narrow-gauge line between Cranzahl and Oberwiesenthal operated by the Saxon Steam Railway Company . Other narrow-gauge railways are only operated as museum railways. Cross-border rail traffic is on the Schwarzenberg – Johanngeorgenstadt railway line in Johanngeorgenstadt and on the Zschopautalbahn in Bärenstein.

The Erzgebirgskreis is part of the Verkehrsverbund Mittelachsen (VMS). All public transport, with the exception of the Fichtelbergbahn, can therefore be used at uniform VMS tariffs. 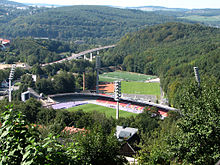 With the airfield Chemnitz-Jahnsdorf in the north of the Ore Mountains and the airfield Großrückerswalde near Marienberg there are two airfields . The closest airports with scheduled services are Karlsbad , Leipzig-Altenburg , Dresden , Prague and Leipzig / Halle .

There are 32 designated nature reserves in the district (as of February 2017).

See also : List of nature reserves in the Erzgebirgskreis

The FC Erzgebirge Aue is probably the best known sports club of the circle.

In contrast to many other regions of the GDR, Christian life in the Ore Mountains took less of a back seat. The proportion of members of the Evangelical Lutheran Church is around 150,000 people (40% of the population), well above the average for the Free State of Saxony (21%). About 8,000 parishioners (2%) belong to the United Methodist Church . In addition to this, some other free churches , such as the Seventh-day Adventists with several congregations, are also represented. There are also some Roman Catholic parishes and a large number of New Apostolic parishes. The special religious communities Jehovah's Witnesses , Community in Christ Jesus ( Lorenzianer ) with the central sanctuary Eliasburg in Pockau and the Church of Jesus Christ of Latter-day Saints ( Mormons ) with communities in Schwarzenberg and Annaberg-Buchholz are also represented locally .

→ Main article : List of church buildings in the Erzgebirgskreis

Schwarzenberg is the fourth largest city in the district

Marienberg is the third largest city in the district

Counties and cities in Saxony

See also : List of administrative districts and cities in Saxony