Street view of the main state archives from Albertstrasse , in the foreground the old warehouse building, to the right the administration building

The building is located in the government district in the Inner Neustadt in Dresden .

As one of the largest German state archives, the main state archive in Dresden stores around 40 kilometers of shelving documents , official books, files, drawings, maps and cracks, as well as electronic and other data carriers from eleven centuries of German history. The basis of the activity is the Archives Act of the Free State of Saxony.

Within the Saxon State Archive, the Main State Archive Dresden is responsible for the archives of the ministries of the Free State of Saxony as well as the courts, authorities and other public bodies in the former Dresden administrative district . 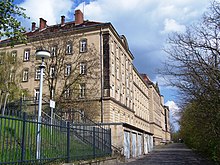 Alternative location in the former building of the Saxon State Library

The main state archive was founded in 1834 to take over the documents of the authorities of the Kingdom of Saxony, which were dissolved in the course of the administrative reform of 1831. It emerged from the secret archive established in 1702.

Since 1915, the archive has been housed in a functional building on Albertstrasse / Archivstrasse that was built by Karl Ottomar Reichelt and Karl Heinrich Koch between September 5, 1912 and June 7, 1915 . The historic building complex, consisting of the striking warehouse building on Albertstraße, the administration building with the old reading room on Archivstraße and the boiler room behind, is listed.

From October 6, 2006, a new storage building was built as a passive house on the corner of Archivstrasse and Erich-Ponto-Strasse, south of the old archive building. The square new warehouse building has nine floors, three of which are basement floors, and is connected to the basement of the administration building by an underground corridor. The topping-out ceremony for the new building was celebrated on October 26, 2007. After the completion of the new building, the renovation of the historical structure took place with the exception of the boiler house. The previously unused atrium in the old warehouse building was converted into an atrium hall with a glass roof structure and a new entrance area was set up from Albertstrasse. Until the completion of the construction work, the former property of the Saxon State and University Library in Dresden in an old barracks building in Albertstadt on Dresden's Marienallee served as an alternative location. On October 17, 2011, the new public area in the old warehouse building was released for use, and by mid-November the remaining archive material had been returned from the alternative location on Marienallee.

The new atrium on the ground floor of the historic warehouse building now forms the core of the public area. This is surrounded by the two-story reading rooms with a gallery. The floors above continue to serve as a magazine. Since October 2011, the Saxon State Archives have found their new headquarters in the renovated administration building . The wood-paneled historical reading room in the administration building is used as a lecture hall.

Directors since it was founded as a secret archive in 1702 (1834 main state archive):

With the establishment of the Saxon State Archives in 2005, the director's office in the main state archive was abolished. Guntram Martin continued to be the head of the department from 2005 to 2017, and from October 10, 2007 he was the department head. Since September 1, 2017, the department has been provisionally headed by Peter Wiegand, who was officially appointed head of department on March 20, 2018.