Woldemar Lippert was the only son of the starch manufacturer August Hermann Lippert (1818-1908) and his wife Christiane Friederike Lippert, née Böhmert (1832-1908). Lippert attended the community school in his hometown and from 1873 to 1881 the cross school there . Then he was a one-year volunteer in the grenadier regiment "Kaiser Wilhelm, King of Prussia" (2nd Royal Saxon) No. 101 . From the summer semester of 1882 on he studied history , historical auxiliary sciences , German , geography and ancient languages at the University of Leipzig , with Georg Voigt , Wilhelm Arndt and Carl von Noorden , among others . With a thesis on Rudolf of Burgundy , he was awarded Dr. phil. PhD . His first reviewer was Wilhelm Maurenbrecher . From 1886 to 1887 he worked under Ernst Ludwig Dümmler on the Monumenta Germaniae Historica . For this he moved to Vienna , where he studied diplomacy with Theodor von Sickel . Because of uncertain future prospects as a scientist and lack of financial reserves, he initially preferred the teaching profession. On October 22, 1886, he passed the state examination for teaching at secondary schools. From Easter 1887 to 1891 he was a high school teacher or senior high school teacher at the Wettiner Gymnasium in Dresden.

Since April 1891 was Lippert archive clerk at the Central State Archive Dresden , since April 1893 State Archivist, since August 1898 on Archives since August 1906 Government and since December 1912 Senior Government before finally in July 1919 Privy Councilor and Head was the Saxon Central State Archive in Dresden. Under his leadership, exhibitions were held there for the first time to bring the treasures of the archive closer to larger sections of the population. The topics were Luther and the Reformation in 1921 , documents in 1922 , the Rhineland in 1925 and the history of the Thirty Years' War in 1927 . On January 31, 1928, he retired and became an archivist for the “Haus Wettin Family Association”. After the seizure of power by the Nazis, he joined the Nazi Party . The University of Leipzig renewed his doctorate in 1935 in recognition of his scientific merits.

Lippert was a member of various scientific societies. As a student, he joined the “Red Lion” association for history and historical auxiliary sciences in 1884. In 1890 he became a member of the Saxon Antiquities Association, whose board member and secretary he became in 1903. From 1926 to 1936 he was its chairman and at the same time editor of the association's magazine “New Archive for Saxon History”, and in 1936 he was an honorary member of the association. He also became an honorary member of the Lower Lusatian Society for Anthropology and Archeology (1894) and the Upper Lusatian Society of Sciences (1904). Since 1905 he was a full member of the Saxon Commission for History. Lippert was also a member and later chairman of the Historical Society in Dresden. In 1926 he co-founded the Association of Saxon History and Antiquity Societies and became its first chairman. He was an adviser to the general association of German history and antiquity associations and a member of the Saxon Monument Preservation Council. In addition to his Saxon homeland, he also felt particularly connected to Lower Lusatia : “ I've grown so closely with it for a quarter of a century that scientifically it is also a home for me alongside our Mark Meißen . ”He wrote in 1918. Lippert's numerous preparatory work on Niederlausitz made it possible for Rudolf Lehmann in 1937 to compose a comprehensive overview of the history of this landscape. 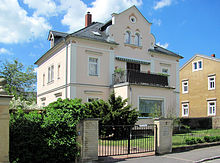 Lippert married Wilhelmina Johanna Thecla Müller in 1890 , who died in 1898. In 1899 he entered into a second marriage with Katharina (Käthe) Henriette Ina Pape, with whom he lived in the Villa Käthe in Niederlößnitz . Her son Rudolf (born April 18, 1891, † August 29, 1918) fell in Flanders a few weeks before the end of the First World War .