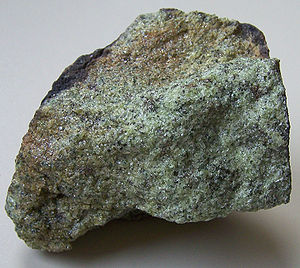 Spinel -lherzolite in the form of a so-called “olivine bomb”, a xenolite dragged from the upper mantle . The basalt surrounding it can be seen as a dark material on the upper edge of the handpiece. Site: Dreiser Weiher , Vulkaneifel .

Lherzolite is a relatively common, ultramafic , plutonic peridotite rock of deep green to black-green color. Lherzolites form a large part of the lithospheric mantle and the asthenosphere .

The lherzolite was scientifically described for the first time by Jean-Claude Delamétherie in 1795 . He had named the rock after its type locality , the Étang de Lers (also Lac de Lhers or in the old spelling: Étang de Lherz ) located near Massat ( Ariège department ) in the Pyrenees . The place name Lherz (or Lers or Ers) is derived from the Altokzitan orer or ers , the participle of the verb erzer - to build up, to erect. This is likely to mean the vulgar Latin ergere . What is obviously meant is the rocky slope that builds up steeply behind the lake.

Close-up of a fresh fracture surface of a spinel lherzolite from the type locality. The blackish spinel crystallites are clearly visible.

Lherzolites consist mainly of the minerals olivine (40–90% by volume) with at least 5% ortho- and clinopyroxene each . In the QAPF diagram , they fall into field 16 of the Ultramafitolite .

Besides the three main components

The following phases occur depending on the prevailing pressure and temperature conditions :

The following can also occur:

The modal mineral inventory is illustrated using a lherzolite from the Ivrea zone :

Lherzolites weather on the earth's surface with reddish-orange-brown to ocher-yellow hues. Are formed here carbonates , quartz , different iron hydroxides or hematite . In the hydrothermal area (up to 400 ° C) the rocks serpentinate under the influence of carbon dioxide- containing waters, whereby magnesium is removed when water is absorbed. At the same time, the new formation of serpentine minerals leads to an increase in volume .

Four types of structure can be distinguished in lherzolites :

Protogranular structures are created by recrystallization , which probably takes place during partial melting (with the creation of basaltic magmas ) in the earth's mantle. The original structure is completely replaced. Protogranular structures consist of large, almost undeformed olivine grains with curvilinear grain boundaries and an indistinct spatial preferred direction. Spinels and clinopyroxenes form rounded inclusions in orthopyroxes. According to Green and Radcliffe (1972), the recrystallization may have occurred syn- or post-kinematically. Thereafter, a continued recovery process , a ( engl. Recovery ), recognizable by the small number of dislocations (engl. Dislocations ) or sub grain boundaries (engl. Subgrain boundaries ).

With continued plastic flow, this structure changes into a porphyroclastic structure . This characteristic structure of coarse-grained, very heavily stressed porphyroclasts and equally large, small-grained and practically undeformed neoblasts occurs most frequently in alpinotype peridotites . The neoblasts form a distinct foliation , the orientation of which deviates from the very clear porphyroclast orientation. Spinel usually occurs interstitially between the olivine grains, but can also be in contact with the pyroxenes. Relatively high-temperature deformations are indicated internally by intracrystalline sliding processes - the porphyroclasts have clear undersized grain boundaries with edge dislocations - as well as by syn- and post-tectonic recrystallization (neoblast formation). The flow processes take place here under shear .

The even-grain structure is created by complete recrystallization from the porphyroclastic structure. It is comparable to the structure of granulites in the lower crust and is likely to have arisen from very intensive flow processes. The very small grains appearing in polygonal aggregates are characteristic. Porphyroclasts can still be present in traces, but are usually completely absent. Even-grain structures can be divided into two sub-types - one with an irregular mosaic texture and one with a well- regulated tabular texture of the olivine grains. The time of recrystallization is not clear, but the tabular texture indicates a synkinematic origin followed by static heating. The recrystallization mechanism is assumed to be subgrain rotation .

Poikiloblastic structures are rare in lherzolites. In them, large pyroxe crystals enclose many small olivines. They possibly point to metasomatic processes.

The chemical composition of the lherzolite is particularly influenced by the melting processes within the shell . These lead to the depletion of the peridotite in so-called incompatible elements , which due to the charge or the radius of their ions do not fit into the crystal structure and therefore preferentially melt into the melt. So lherzolite z. B. partially melted by pressure relief in rift zones , whereby part of the mineral inventory is removed from the rock and thus a conversion into the heavily depleted Harzburgite takes place.

According to current theory, however, the lherzolite of the uppermost mantle is itself a depleted rock, the missing components of which had migrated to form the continental crust . It is assumed that reservoirs of the original pyrolytic rock (so-called primitive mantle ) still exist in the lower earth mantle .

Unevenly grained lherzolite of medium grain size (diameter 1 - 3 millimeters). The main components olivine, clinopyroxene, orthopyroxene and spinel are clearly visible in the thin section. The olivines differ from the pyroxenes in their clearer and more irregular cracks. Olivine and pyroxene are in a perfect state of equilibrium , recognizable by the triple points at which the crystals meet at an angle of 120 °. Spinel (dark brown, isotropic under crossed polarizers ) occurs interstitially.

Lherzolites generally arise in the upper mantle and are stable up to a depth of about 300 kilometers (from this depth the transition to high pressure phases takes place).

This mantle sequence, which is characteristic of our planet, is also assumed for the other terrestrial planets ( Mercury , Venus and Mars ) as well as the moon , whereby slight differences are to be expected depending on the respective mantle composition. So instead of the garnet lherzolite, Mars probably has a garnet wehrlite . Mercury (and probably also Mars) has the layer structure of spinel-bearing plagioclase weirlite => spinel-lherzolite => spinel-garnet-weirlite due to the lack of orthopyroxene.

In Ophiolithfolgen to lherzolite found in the footwall , harzburgites are here but most often. Lherzolites form part of alpine peridotite massifs. Occasionally they also appear on the fracture zones of the mid-ocean ridges . As xenolites , they can usually be found in the chimney fillings of the kimberlites . They can also be found as bombs in the ejecta of alkali basalt volcanoes .

Basaltic magmas are mainly formed by partial melting of lherzolites.

Lherzolites or lherzolite shergottites have been discovered in several meteorites from the Antarctic . Their place of origin is attributed to the planet Mars . Including the meteorites of the Allan Hills A 77005, the Lewis Cliffs LEW 88516 and the Grove Mountains GRV 99027, as well as two of the Yamato Mountains YA 1075 and Y-793605. They contain 40 to 60 vol .-% olivine, poikilitic pigeonite and , to a lesser extent , plagioclase, chromite and titanomagnetite .

In peridotites of Variscan Orogeny :

In volcanic bombs and xenolites: