Chromite , also known as chrome iron stone or chrome iron ore , is a frequently occurring mineral from the group of spinels within the mineral class of " oxides and hydroxides ". With the idealized chemical composition Fe 2+ Cr 2 O 4 , it is chemically an iron - chromium oxide.

Chromite crystallizes in the cubic crystal system . However, the mineral only occasionally develops macroscopic crystals in the millimeter to centimeter range with an octahedral habit or cubic combinations such as cubes and dodecahedra that are visible to the naked eye . It is mostly found in the form of granular to massive mineral aggregates . Chromite is generally opaque and iron-black in color with a greasy metallic sheen on the surfaces. Thin layers are, however, deep brown, translucent and the line color is also brown.

With a Mohs hardness of 5.5, which roughly corresponds to the hardness of window glass , chromite is one of the medium-hard minerals. It shows no cleavage , but is brittle and breaks when exposed to uneven to slightly scalloped surfaces.

The mineral was first described in 1797 by Louis-Nicolas Vauquelin , who initially referred to it as Fer chromaté aluminé . Its name, which is still valid today, chromite - based on its main component in the compound - was not given to the mineral until 1845 by Wilhelm von Haidinger .

The type locality (first location) is the Carrade de Cavalaire deposit in the French community of Cavalaire-sur-Mer (Provence-Alpes-Côte d'Azur).

Even in the outdated 8th edition of the mineral classification according to Strunz , the chromite belonged to the mineral class of "oxides and hydroxides" and there to the department "Compounds with M 3 O 4 - and related compounds", where together with magnesiochromite and manganochromite it belongs to the group of " Chromium Spinels “with the system no. IV / B.01c within the spinel series. The chromohercynite and picotite, which are also still included in this group, have meanwhile been discredited as varieties of hercynite containing chromium.

In the last revised and updated Lapis mineral directory by Stefan Weiß in 2018 , which, out of consideration for private collectors and institutional collections, is still based on this classic system of Karl Hugo Strunz , the mineral was given the system and mineral number. IV / B.03-20 . In the "Lapis system" this corresponds to the department "Oxides with a metal: oxygen ratio = 3: 4 (spinel type M 3 O 4 and related compounds)", where chromite, together with cochromite, magnesiochromite, manganochromite, nichromite and zinc chromite, form the group of "Chromite spinels" forms.

The 9th edition of Strunz's mineral systematics , which has been in effect since 2001 and was updated by the IMA until 2009, also classifies chromite in the oxides division with a molar ratio of “metal: oxygen = 3: 4 and comparable”. This is, however, further subdivided according to the relative size of the cations involved , so that the mineral can be found according to its composition in the subsection "With only medium-sized cations", where it can be found together with brunogeierite , cochromite, coulsonite, cuprospinell, Filipstadite , franklinite, gahnite, Galaxite, Hercynite, Jakobsite, Magnesiochromite, Magnesiocoulsonite, Magnesioferrite, Magnetite, Manganochromite, Nichromite (N), Qandilit , Spinel, Trevorite, Ulvöspinell , Vuorelainenit and Zincochromite the " Spinel Group " with the system no. 4.BB.05 forms.

The systematics of minerals according to Dana , which is mainly used in the English-speaking world , assigns chromite to the class of "oxides and hydroxides" and there in the section "multiple oxides". Here it is in the " chrome subgroup " with system no. 07.02.03 can be found in the subsection “Multiple oxides (A + B 2+ ) 2 X 4 , spinel group”.

However, chromite forms a complex mixed crystal system with magnesiochromite (MgCr 2 O 4 ) as well as with hercynite (FeAl 2 O 4 ) and magnetite (simplified Fe 3 O 4 ). Correspondingly, the mixed formula can also be expressed in the form (Fe, Mg) (Cr, Al, Fe) 2 O 4 . The elements iron and magnesium or chromium, aluminum and iron specified in the round brackets can represent each other in the formula ( substitution , diadochy), but are always in the same proportion to the other components of the mineral.

Depending on the place of discovery, various foreign admixtures can also occur. For example, mineral samples from the Bushveld complex in South Africa and the Great Dyke in Zimbabwe found between 0.26 and 0.27% TiO 2 , up to 0.28% V 2 O 3 and up to 0.06% NiO . In addition, manganese , zinc and titanium are occasionally found .

Chromite crystallizes cubically in the spinel structure with the space group Fd 3 m (space group no. 227) , the lattice parameter a  = 8.36  Å and 8 formula units per unit cell . Template: room group / 227

Spinels are among the high-melting compounds whose melting point is usually over 1700 ° C, but the melting point of chromite is far higher at 2140 ° C. The mineral is generally non-magnetic . Due to its high melting point, chromite cannot be melted in front of the soldering tube, but when heated it usually becomes magnetic . Even in newly discovered specimens, some specimens may have weak magnetism. The cause of this can be segregation reactions in the chromite – magnetite system or natural heating of the mineral, for example due to metamorphic influences.

Chromite is insoluble in common acids. According to Vahromeev (1950), structural etching for micrographs can be achieved by first placing the sample in a solution of potassium perchlorate (KClO 4 ) for 30 to 120 minutes - according to Grafenauer, potassium chlorate (KClO 3 ) is more effective - and sulfuric acid (H 2 SO) 4 ) cooks. 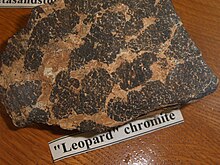 In 1969, Erich Seeliger and Arno Mücke first described a mineral from Ramberget on the island of Hestmona in the Norwegian municipality of Rødøy with a chromite composition of (Fe, Mg, Zn) (Cr, Fe, Al) 2 O 4 , but tetragonally crystallizing and with clearly anisotropic properties. They referred to the newly discovered modification of chromite as donathite after Martin Donath (1901-1965), who described the anisotropic properties of the Rambergeter material as early as 1931. In further investigations of the type material, which Eugen Libowitzky carried out in 1991 on the type material from Ramberget, it turned out that the donathite was a fine lamellar intergrowth of chromite and magnetite. The apparent anisotropy described is known as shape birefringence. In this optical phenomenon, the parallel alignment of the fine lamellae, which are equal to or smaller than the wavelength of the light, causes the observed birefringence. Due to the more recent test results, donathite was discredited as an independent mineral type.

As Sprenkelerz or Leopardenerz a mineral mixture of black, rounded Chromitkristallen is several millimeters in size in a lighter matrix of dunite or serpentinite designates that the spot pattern of a leopard similar. 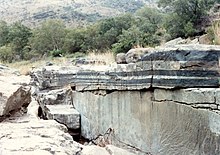 An outcrop of chromite layers that have gained economic importance in the eastern part of the Bushveld complex , south of Steelpoort

Chromite with calcite and uvarovite from the Saranovskoye deposit near Gornosavodsk (Perm) , Russia

Chromite is primarily formed in basic to ultra- basic , liquid magmas . Corresponding host rocks are therefore predominantly peridotites and serpentinites , more rarely pyroxenites and picrites, which emerged from them through metamorphosis . Due to its comparatively high hardness and density, it is very weather-resistant and is therefore also deposited in secondary deposits such as fluvial sediments and soaps . Furthermore, chromite can occur as a secondary part in stone meteorites (silicate meteorites ) .

The most famous ore deposits include the Urals in Russia, Guleman (Eastern Anatolia) in Turkey and above all the Great Dyke near Shurugwi (Selukwe) in Zimbabwe and the Bushveld Complex in South Africa. The world reserves of chromite in the South African countries are estimated to be over 80%. The remainder is spread across the Commonwealth of Independent States (CIS) and smaller deposits in the Stillwater Complex of the US state of Montana and Kemi in Finland.

As a frequent mineral formation, chromite can be found at many other sites. So far, over 3800 sites have been documented worldwide. At its type locality , the Carrade de Cavalaire deposit in the French municipality of Cavalaire-sur-Mer, chromite occurs together with iron nodules in serpentinite . As accompanying minerals are found according to various Serpentine , but depending on the location and olivine and plagioclase , and among others, the minerals enstatite , ilmenite , magnetite , pentlandite , pyrrhotite and Ulvöspinell .

Other previously known chromite sites in France are mainly known from the regions of Auvergne-Rhône-Alpes , Bretagne , Grand Est , Corsica , the overseas community of New Caledonia , Occitania . The mineral was also found in the meteorites Chantonnay near Le Blanc and Château-Renard near Montargis in the Center-Val de Loire region , in the dachine complex near Saül in the overseas department of French Guiana, in the meteorites Le Teilleul near Manche and L'Aigle in Normandy, near Combeyrol in the municipality of Jumilhac le Grand and in the meteorites named after the towns of Saint-Séverin and Agen in the Nouvelle-Aquitaine region.

In Germany, chromite could be found in a soap deposit at Sulzbach near Sulzburg as well as in the Clara pit near Oberwolfach and in the serpentinites near Höfen in the Ortenau district in Baden-Württemberg; on the Großer Teichelberg in the municipality of Pechbrunn, in the Zeilberg quarries near Maroldsweisach and Heß near Wurlitz and in the basalt works near Triebendorf (Wiesau) in Bavaria; on the slag heaps of the former zinc smelter Genna near Letmathe in North Rhine-Westphalia; in the Caspar quarry on Ettringer Bellerberg in Rhineland-Palatinate; in the Scheiden quarry in the municipality of Losheim am See in Saarland and near Callenberg in Saxony. Furthermore, chromite could be detected as a component of various meteorites such as in the Eichstädt , Stubenberg and Machtenstein meteorites as well as in the remains of the Mässing (1803) and Schönenberg (1846) meteorite falls . Other chromite finds in Germany are known from Brandenburg , Hesse , North Rhine-Westphalia , Rhineland-Palatinate , Saxony and Saxony-Anhalt as well as Schleswig-Holstein .

In Austria the mineral was found in a serpentinite quarry near Griesserhof , on the Plankogel near Hüttenberg and near Gmünd in the Reisseck group in Carinthia; in a granulite quarry near Meidling (municipality Paudorf) , in the serpentinites near Wolfsbach (municipality Drosendorf-Zissersdorf) and in the quarry Saugraben near Wiedendorf (Straß im Straßertale) as well as in the meteorite Lanzenkirchen near Neustadtl an der Donau in Lower Austria; in many places in the Hohe Tauern (Felber, Fuscher and Habach valleys) and the Schladminger Tauern near Strobl on Lake Wolfgang in the Salzburg region. Furthermore, chromite is known from many places in Styria as well as from some places in North Tyrol and Upper Austria .

Ayi Damar and Uzun Damar in Turkey, where crystals up to one centimeter in size have been found, are also known for their extraordinary finds of chromite crystals and stages . Centimeter-sized, albeit coarsely crystalline, chromite crystals were also discovered in Sierra Leone (see picture opposite).

Also in mineral samples of the Mid-Atlantic Ridge (hydrothermally field Trans-Atlantic Geotraverse, TAG), more precisely on the northeastern edge of the Markov depth and in the hydrothermal field of transatlantic Geotraverse and outside of the earth on the moon in Fra Mauro crater and the Maren Tranquillitatis and Crisium could Chromite can be found.

→ Main article : Use of chrome

With a chromium content of up to 46.46%, chromite is the most important source for the extraction of this metal . It is also the only ore mineral from which chromium is extracted. So-called “rich ores” can contain up to 55% Cr 2 O 3 and concentrates made from “pain” up to 50% .

The chrome extracted from the mineral is mainly used to manufacture stainless steel and to refine surfaces by chrome plating .

Due to its high melting point, chromite is used to manufacture highly refractory chrome and chrome-magnesite bricks.

Various chromium salts are used as oxidizing agents and tanning agents for leather . In addition, due to their bright colors, they are used in the production of dyes.