Franklinite , also outdated as Zinkoferrit known, is a rarely occurring minerals from the mineral class of "oxides and hydroxides" with the idealized chemical composition ZnFe 3+ 2 O 4 and is thus chemically seen a zinc - iron - oxide . Structurally, franklinite is a spinel .

Franklinite crystallizes in the cubic crystal system in the structure of spinel and typically develops octahedral crystals of up to 22 cm in size, the corners of which are usually rounded. Coarse or fine-grained inclusions in other minerals are also found. The mineral is generally opaque and only thinly translucent in deep red. The crystals can be iron black, brown or red in color. Fresh samples show a metallic sheen on the surfaces .

Franklinite was first discovered in several pits in the vicinity of the city of Franklin in the US state of New Jersey . The first description was in 1819 by Pierre Berthier , who named the mineral Franklin after its type locality and Benjamin Franklin after its namesake .

Type material for this mineral is not defined.

Already in the outdated, but still in use 8th edition of the mineral classification according to Strunz , franklinite belonged to the mineral class of "oxides and hydroxides" and there to the department of "compounds with M 3 4 4 - and related compounds", where it, together with Jakobsite, Magnesia ferrite, magnetite and trevorite the group of "iron (III) spinels" with the system no. IV / B.01b .

In the last revised and updated Lapis mineral directory by Stefan Weiß in 2018 , which, out of consideration for private collectors and institutional collections, is still based on this classic system of Karl Hugo Strunz , the mineral was given the system and mineral number. IV / B.02-60 . In the "Lapis system" this corresponds to the department "Oxides with a metal: oxygen ratio = 3: 4 (spinel type M 3 O 4 and related compounds)", where franklinite together with cuprospinel, jacobsite, magnesioferrite, magnetite and trevorite form the group of "Ferrite spinels" forms.

The 9th edition of Strunz's mineral systematics , which has been valid since 2001 and was updated by the IMA until 2009, also classifies franklinite in the department of "Oxides with the molar ratio of metal: oxygen = 3: 4 and comparable". This, however, is further divided according to the relative size of the participating cations , so that the mineral according to its composition in the subdivision to find "With only medium-sized cations" where it along with Brunogeierit , chromite, Cochromit, Coulsonit, Cuprospinell, Filipstadit , Gahnit , Galaxite, hercynite, jacobsite, magnesiochromite, magnesiocoulsonite, magnesioferrite, magnetite, manganochromite, nichromite (N), qandilite , spinel, trevorite, ulvöspinell , vuorelainenite and zinc chromite the "spinel group" with the system no. 4.BB.05 forms.

The systematics of minerals according to Dana , which is mainly used in the English-speaking world , assigns Franklinite to the class of "oxides and hydroxides" and there in the department of "multiple oxides". Here it is together with magnesioferrite, jacobsite, magnetite, trevorite, cuprospinel and brunogeierite in the " iron subgroup " with the system no. 07.02.02 to be found in the subsection “Multiple Oxides (A + B 2+ ) 2 X 4 , Spinel Group ”.

In chemically pure form, which, however, has not yet been observed in natural Franklinites and has therefore only been realized in syntheses so far, the composition ZnFe 3+ 2 O 4 consists of 27.12% by weight zinc (Zn), 46.33% by weight % Iron (Fe) and 26.55% by weight oxygen (O).

Due to the mixed crystal formation, part of the zinc is therefore mostly replaced (substituted) by divalent manganese and / or iron and part of the trivalent iron by equivalent manganese . The mixed formula is given in various sources as (Zn, Mn 2+ , Fe 2+ ) (Fe 3+ , Mn 3+ ) 2 O 4 . Especially between franklinite and magnetite and between franklinite and jacobsite, all intermediate links occur at high temperatures. However, the miscibility decreases as it cools, which leads to the individual phases segregating .

These segregation processes are, among other things, the cause of what appear to be "magnetic Franklinites", which have lamellar magnetite segregation.

Franklinite crystallizes cubically in the structure of spinel with the space group Fd 3 m (space group no. 227) and the lattice parameter a  = 8.47  Å as well as eight formula units per unit cell . Template: room group / 227 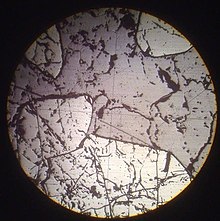 Franklinite is infusible in front of the soldering tube, but it becomes magnetic . It is not very resistant to acids and can be dissolved in hot hydrochloric acid (HCl), with the development of chlorine gas .

Under the incident light microscope , Franklinit reflects the light almost completely, which means that it appears quite pure white. In the air it appears somewhat lighter than sphalerite and much lighter than zincite . The reflectivity of franklinite is, however, greatly reduced in oil and it also shows a color change to gray-green, which allows it to be distinguished from the more reddish magnetite.

With a Mohs hardness of 6 to 6.5, Franklinite is one of the medium-hard to hard minerals that, like the reference mineral orthoclase (hardness 6), can just be scratched with a steel file . Franklinite shows no tendency to split , but secretions are possible after the octahedral surfaces {111}. It breaks with uneven to slightly mussel-looking fracture surfaces.

Franklinite (black) with zincite (red) from Franklin, New Jersey - exhibited in the Mineralogical Museum of the University of Bonn 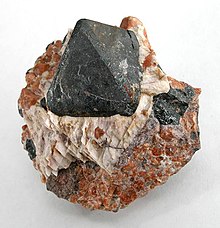 As a rare mineral formation, Franklinite could only be detected at a few sites, with around 60 sites (as of 2018) being known to date. In addition to its type locality Franklin , where the mineral was found in several pits and shafts in this largest mining area in New Jersey , Franklinite entered the United States at Moffet Point in the Aleutians East Borough in Alaska, in the Desert View Mine California's San Bernardino Mountains and the Rio Dolores Mine near Central City in Gilpin County of Colorado. Two other sites, the Webber shaft in the Fairview silver mine in Churchill County of Nevada and the "Devine zinc property" in Hidalgo County of New Mexico are so far questionable as the finds have not yet been confirmed.

The only known site in Germany so far is a slag dump from the Genna zinc smelter in the Letmathe district in the Sauerland (North Rhine-Westphalia). In Austria, too, the Stradner Kogel near Wilhelmsdorf (municipality of Bad Gleichenberg) in Styria is the only known location for Franklinite.

Other locations include Iron Knob and Zeehan, as well as in Mukinbudin Shire in Australia, near Vazante in the Brazilian state of Minas Gerais , in the prefectures of Meizhou (Guangdong) and Yichun (Jiangxi) in China, on Ross Island in Ireland, near Nežilovo (Opština Veles) and in the Kratovo - Zletovo district in Macedonia, near East Camp ( Santa Eulalia , Chihuahua) and La Blanca ( Municipio Ojocaliente , Zacatecas) in Mexico, near Trzebinia in Poland, near Ocna de Fier , Răzoare (Maramureș) and Iacobeni ( Suceava) in Romania, in the Pereval marble quarry near Sljudjanka (Eastern Siberia) and at three sites in the Chibinen and Lowosero Tundra in Russia, the Lusaka Province in Zambia, near Garpenberg (Dalarna), Långban and Hasselhojden (Västmanland) in Sweden , at Barberton (Mpumalanga) and in the Edendale lead mine near Pretoria (Gauteng) in South Africa and at the Kerimasi volcano in the Arusha region of Tanzania.