Ross Island ( Irish : Oileán an Rois ) is a 66.5 hectare lake island , today connected to the mainland, on the east side of Lough Leane near Killarney in County Kerry in Ireland . The island is the oldest copper mining center on the Irish island . 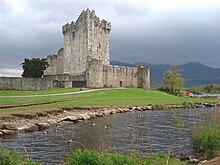 Copper mining began with the Irish Bronze Age (around 2400–1800 BC). Paul T. Craddock (born 1945) even dates it to the second half of the 3rd millennium BC. Chr. Relocated. It is even mentioned by copper mining from 4000 BC. Spoken. The discovery of ceramics from the Bell Beaker Culture on Ross Island, however, connects its wearers with the beginnings of Irish metallurgy at the end of the Neolithic . Mining took place here again in the 8th century and in the 18th and 19th centuries AD. It culminated in large industrial operations that delivered around 5000 tons of copper ore to smelters in England between 1804 and 1829.

The copper ore-rich horizon on Ross is concentrated in the local limestone stratum on a small stretch of the south coast. The mineral lies at a maximum depth of only 13-16 m along the lake shore. The island, on which guided hikes take place, is now part of Killarney National Park . Nearby is Ross Castle .