This article is about the person. For the place see Tiradentes (Minas Gerais) . 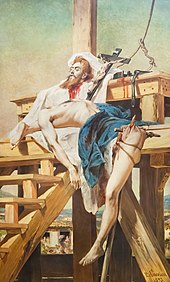 Tiradentes was born in 1746 under the name Joaquim José da Silva Xavier in modest circumstances. He came from near São João del-Rei in what was then the Minas Gerais captaincy . Orphaned at an early age , his mother died in 1755, his father died in 1757 and he and his godparent moved to Vila Rica (now Ouro Preto). He was raised by a teacher who was also a surgeon. So he learned to pull teeth - hence his name "Tiradentes" (Portuguese: tooth puller) - and to earn his living with it. He also hired himself a. a. as a cattle herder and miner.

In the military, he became an ensign . He was denied another military career because of his origins. A proposal he had worked out to channel the canal in Rio de Janeiro failed due to resistance from Portuguese officials.

Tiradentes used his knowledge of minerals when engaging in public service. He was sent to cities along the route between Vila Rica (the capital of Minas Gerais) and Rio de Janeiro.

At that time, the Minas Gerais captaincy, established in 1720, was in economic difficulty. Rich gold discoveries had made its capital, Vila Rica, today's Ouro Preto , the richest and largest city in the Brazilian west. When gold discoveries dwindled in the 1760s, the area threatened to become impoverished under the burden of the taxes payable to Portugal . A conspiracy arose, to which the rich in the region in particular belonged. The aim of the "Inconfidência Mineira" was to achieve independence and abolish slavery , following the example of the USA . Tiradentes joined this group and became their leader.

The group was betrayed by Joaquim Silvério dos Reis . On April 21, 1792, Tiradentes was the only one of the conspirators to be executed in Rio de Janeiro . The royal administrator of the province, Luís António Furtado de Castro do Rio de Mendonça e Faro, the Visconde de Barbacena (" Viscount of Barbacena ") gave the order "to hang him, to cut him into quarters and to give up parts of the bloody corpse as a warning throwing the streets and villages around. ”A document was written in his blood. His head was on display in the main square of Vila Rica; this place is now called Praça Tiradentes .

Thirty years after his death, Brazil gained independence, and Tiradentes was now regarded by many - not the monarchists - as the first national hero. After the fall of Emperor Pedro II in 1889 and the proclamation of the republic, the day of his death, April 21, was declared a national holiday.