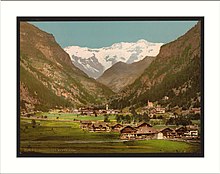 Historical view of Gressoney with Monte Rosa in the background 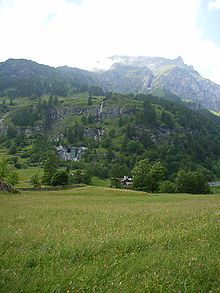 Landscape in the middle Lystal near Bielen 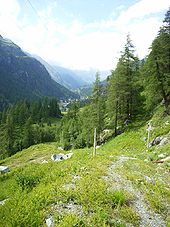 Gressoney (Walser German Greschonei [greʃɔˈnɛɪ] , in German sporadically in the Germanized form Kressenau ) is a valley south of the Monte Rosa massif in the Italian region of Aosta Valley . It consists of two communities, Gressoney-La-Trinité (Walser German upper part with the center en de Tache, 1624  m above sea level ) and Gressoney-Saint-Jean (Walser German Mettelteil with the center Platz or Zer Chilchu, 1385  m above sea level . , or [lower part of municipality] Under section ), where La Trinite is located above the valley village and Saint-Jean , the larger of the two.

Outside the municipality, further down the valley in the southward running Val de Gressoney , there are the villages of Gaby (Walser German Goabi ) and Issime (Walser German Eischeme ). The valley is traversed by the Lys (Walser German Liisu / Leisu ), which rises from the Lys glacier not far from the border between Italy and Switzerland and flows into the Dora Baltea / Doire Baltée at Pont-Saint-Martin .

The upper valley of the Lys and thus the Gressoney area was settled by German-speaking Walsers from the Swiss town of Zermatt over the Theodul Pass and through the uppermost Val d'Ayas .

Since the Middle Ages , the Gressoney men were known as shopkeepers and peddlers who visited the markets and fairs in Switzerland and Germany during the summer . As a result, the connection with the German-speaking area could also be maintained during the so-called Little Ice Age , when the ice-free Theodul Pass was covered by glaciers in the Middle Ages.

Between 1939 and 1946, the two communities Gressoney-La-Trinité and Gressoney-Saint-Jean formed a single community named Gressonei , as they did before 1767 . The two districts had the Italianized names Gressonei La Trinità and Gressonei San Giovanni .

Other interpretations are unfounded. An old, fanciful explanation is the Gresson egg, that is, the egg of a bird that is to be called Gresson. Another attempt at etymologizing is that Gressoney is supposed to be the romanization of a German Kressen-Au . Conversely, they wanted to give the two communities the German name “Kressenau”, but the inhabitants of the places in question never used this fancy name themselves, and it never caught on north of the Alps either.

Gressoney is a traditional German-speaking community. Part of the population (in the older generation the far greater part) still speaks Greschuneititsch, the local Walser German , a highly Alemannic German dialect. Today, however, Italian is dominant .

The Italianisation has only with the advent of winter tourism increased dramatically and particularly since the 1960s. Today's language situation is characterized by a strong bilingual or multilingualism with an increasing dominance of Italian. According to a survey carried out by Anna Giacalone Ramat in 1976/77, of the residents of Gressoney who were born before 1923, 76.1% spoke Gressoney German, of those born between 1923 and 1952, 55.9% and of those who who were born after 1952, still 37.5%. In 1992, according to a survey by Peter Zürrer, 14.6% of 6–11 year old schoolchildren spoke “good” or “a little” in German. In 2009 only very few children still speak the Walser German dialect, most of them grow up monolingual Italian.

The languages ​​of instruction in the school are Italian and, due to the Autonomy Statute for the Aosta Valley, also French. In the private sector, however, French is not present in Gressoney. Since the 1980s there have been lessons in Walser German for one hour a week. In the 2008/2009 school year, (Standard) German was introduced for the first time at the schools in Gressoney and the neighboring Issime, for which two German teachers were hired. One of the teachers who works in elementary school and kindergarten also speaks the Titsch von Gressoney. German is now a compulsory subject, but no longer a language of instruction.

In Issime (in the local dialect Eischeme ), a community further down in the Lystal, z. Sometimes a dialect of Walser German is also spoken, whereby the Gressoney and Issim dialects differ so much that they are considered incomprehensible by the population of the other village. 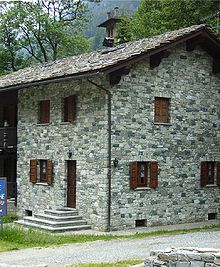 In Val di Gressoney is a long-time natural stone mined. In the 20th century, the focus was on green serpentinite varieties that are sold worldwide. These are breccia-like occurrences, which, due to their structure, create an attractive, lively picture in the deep green rock. The dismantling takes place exclusively with the wire saw .

Bibliography on the dialect

On the history of Gressoney