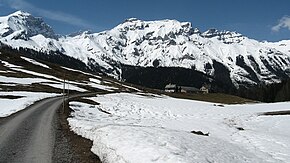 Kunkelspass from the southeast, on the far left the Crap Mats , on the right the Ringelspitz

The Tamina valley runs from the Kunkelspass to the northeast to Bad Ragaz . At Vättis it joins the Calfeisental , which extends in the west from the mountain range around Piz Sardona over the Walser settlement of St. Martin and the Gigerwaldsee to Vättis. Here the Görbsbach coming from Kunkels flows into the Tamina . In the lowest section of the valley lies the Tamina Gorge with Bad Pfäfers .

In the Tamina valley there are several small villages that belong to the political municipality of Pfäfers : These are the localities Pfäfers, Vättis, Vadura, Valens and Vasön as well as the scattered settlement of St. Margretenberg with Furggels. Northwest above the local community Vättis lies at an altitude of 2427  m above sea level. M. on the Drachenberg the entrance to the Drachenloch .

In 1917, bones of a cave bear were found in the Drachenloch. Between 1917 and 1923 two fireplaces were discovered during excavations, and in 1920 a locked stone box with charcoal was found in one passage. The Swiss Society for Prehistory and Protohistory dated the charcoal to be more than 53,000 years old.

In the Tamina Valley there are four geological sites in the Sardona Geopark: the Bad Pfäfers thermal spring in the Tamina Gorge , the Chrüzbachtobel Vättis basement , the Sarganserland AG Vadura power plants and the Vättis Dragon Hole Museum . In addition, the Sardona World Heritage Trail leads through the valley.

In November 2013, the first wolf pack in the Canton of St. Gallen was sighted in Tamina Valley ; so far only a few wolves lived in the canton. The pack consisted of ten animals: the parents, six puppies and two youngsters from last year.

From Tamins in the Chur Rhine valley , a road leads over the Kunkelspass into the upper Tamina valley. This is subject to a driving ban for private motorized traffic. In March 2013, construction work began on the 400-meter-long and 200-meter-high arch bridge, the Tamina Bridge, in the front Tamina Valley . The arch closed on March 28, 2015 and since June 22, 2017 it has been connecting the villages of Valens and Pfäfers via the Tamina. The former connecting road from Valens to Bad Ragaz is only open to pedestrians and cyclists. The Tamina valley is accessible with several PostBus lines and connected to the SBB in Bad Ragaz .