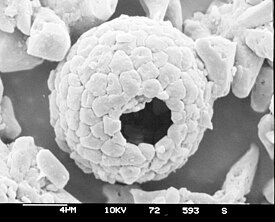 SEM images of representatives of the microfossil groups, which are the main components of the basic mass (matrix) of the chalk limestones (the ones shown here, however, come from a deep sea sediment). Above: A complete coccosphere surrounded by dysarticulated coccoliths. Below: A single calcareous dinoflagellate cyst (“calcisphere”).

Chalk is the more colloquial term for very fine-grained, mostly white or light gray limestones that were mainly created in the Upper Chalk . A very soft and highly porous variant of this limestone that can be cut with a knife is called writing chalk .

Chalk rock consists essentially of calcite (chemically calcium carbonate ) without any admixture of magnesium carbonate . It is therefore one of the limestones. Viewed in detail, it is a limestone with a very fine-grained matrix . The latter is mainly composed of coccoliths , calcitic dinoflagellate cysts (so-called "calcispheres") and amorphous lime sludge. Petrographically, these chalk limestones, insofar as hardly any macrofossils are embedded in the ground mass, are referred to in the Dunham carbonate classification as coccolith-calcispheric mudstones . In the folk carbonate classification , they are coccolith-calcispheric biomicrites . In fact, there are often numerous remains of larger organisms with a calcareous skeleton in the matrix, e.g. B. foraminifera , sponges , mussels , brachiopods , bryozoa , echinoderms and cephalopods .

Many chalk limestones are relatively hard and have a sharp-edged shell-like break . However, writing chalk is crumbly and has an earthy break. Since it is very weakly cemented , writing chalk behaves almost like clay when it is soaked with water and can easily be cut with a knife.

The chalk layers present in the marine deposits of northern Germany , Denmark and England originated in the geological age of the Upper Cretaceous , when the oceans had reached a minimum value of the Mg / Ca ratio. Despite later covering with other sediments, there was no significant compression or solidification ( diagenesis ). As a result, the chalk deposits have an average porosity of 40% of the total volume. This pore structure cannot be seen macroscopically.

Chalk limestone is often layered in a banky or platy manner, sometimes with a bulbous or fibrous formation of the layers. Massive, uncoated deposits, which are characteristic of Rügen writing chalk, are rarer. Horizons with lumps , globules or continuous layers of flint are typical of chalk limestone . These were created diagenetically, the silicon dioxide z. B. comes from silica sponges.

Chalk cliffs of the Stubbenkammer on the Baltic Sea

Danish opencast mine on the Stevns peninsula

Chalk cliffs on the coast at Peacehaven in Sussex

Chalk cliffs on the Dorset coast

The chalk cliffs in Étretat 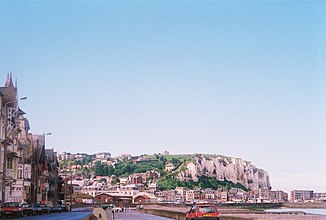 Up to the present day chalk is mainly obtained for use as a pigment . The other uses are only of secondary importance today. The natural white pigment is produced by grinding the sedimentary rock and was named differently depending on its origin or place of processing: Champagne chalk , Danish white , Cologne chalk (obtained near Aachen ), Meudon chalk , Molleton chalk , Rügen chalk , Swedish chalk , Troyer chalk , Viennese white .

Chalk is an (outdated) quality designation. Naturally occurring chalk is always interspersed with sand, stones and possibly mussel shells. These impurities are eliminated by sieving, grinding and sludging .

In some places (England, Russia) the chalk was extracted from its deposit by sawing blocks.

Other substances came onto the market with the name chalk :

Chalk as a white pigment

Chalk has been used as a diluent and as a pigment for white since ancient times . Even today, chalk, mostly slurried in water, is used in paper production. It is also used in blackboard chalk (where it is now usually replaced by plaster of paris) or pastel chalk as writing and drawing material. By adding pigments or wetting microscopic chalk particles with organic dyes, color pigments are created on a chalk basis.

Chalk as a surface for artistic work

Chalk ground is mainly found in the glue-bonded primers of panel painting as a soft leveling layer ( gesso ) between the working wood and the layer of paint. Mostly it is not a matter of pure chalk grounds, but rather mixtures with white lead or zinc white . They were most commonly used in northern Europe , while plaster primers were more common in the southern Mediterranean region .

Chalk as an abrasive

Objects or materials that require gentle surface treatment are treated with chalk slurries. These include objects made of precious metals , glass and precious stones . Depending on the grain size and harder admixtures in the abrasive, different effects are obtained. There are polishing, grinding and scouring recipes for this.

Some chalk deposits were used in addition to clay minerals for the production of fulling earth , which was used in cloth making and also served to remove grease stains from textiles.

Chalk as a building material

In England and Russia, chalk deposits were used to extract building blocks. These countries are among the best-known examples. That put a significant diagenetic ahead consolidation because the building blocks derived from a minimum compressive strength must have. This enabled them to be dismantled by hand using hand saws. They thus represent a transition facies to limestone .

For this purpose, deposits on the Don and the Moscow River have been dismantled in Russia . In England there was one such mining in the county of Berkshire and an abbey was built with chalk blocks. In France, the chalk is widespread as building stone in the Paris basin . Chalk floor slabs were laid in simple houses in the 18th and 19th centuries because they were inexpensive to manufacture. Their abrasion resistance is not favorable for this purpose. The chalk limestone of the Loire Valley, called Tuffeau because of its porosity , characterizes the buildings there, namely the palace complexes of the Renaissance, e.g. B. Chambord Castle , but also the medieval cathedrals in Tours , Nantes etc. It is a rock from the geological age of the Upper Cretaceous, more precisely the Turonian . While chalk was used as a building block in the Champagne region of Chalons-en-Champagne and Vitry-le-François , the limestone deposits around ten kilometers away (so-called Calcaire grossier ) were preferred at Reims Cathedral because of their greater strength. The cathedral of Amiens in Picardy is in turn built from the local, flint- containing chalk. In Aachen , parts of the medieval inner city wall , the Barbarossa Wall , were built from solidified chalk limestone from the Lousberg .

Like other limestones, chalk can also be used for flue gas desulphurisation .