In petrography, the matrix is generally referred to as the relatively fine-grained basic mass of a rock, from which significantly coarse-grained rock components can be distinguished. There are various special definitions for the term matrix in the petrographic sense. a. depends on what type of rock is being considered.

Calpionelliden and others not to be identified, components in a matrix of micrite , tithonische limestones of the Ardèche , France . Typical of the micritic matrix is ​​its dense appearance with a relatively weak translucency.

For comparison: highly transparent sparitic cement fills the majority of the cavity inside a shell, carbonic limestone from Nevada.

In the petrography of sedimentary rocks , the term matrix stands for the finest-grained particles of the sediment from which the rock emerged. An exact definition of the grain size does not exist, but particles smaller than 20 to 30 µm are generally included in the matrix. All sediment particles that are larger are called components * or allochemes . The size data show that a close examination, which are components of a sedimentary rock matrix or components can not take place in the terrain, but by means of thin section analysis under the light microscope must be made.

The components can either "swim" in the matrix d. that is, they are isolated from one another, or they “support” one another, i. i.e., they are in direct contact with each other. One then speaks of a matrix-supported or a grain-supported structure . For more or less matrix-rich sedimentary rocks, there are different names depending on their mineral content and other special properties. The Grauwacke is a siliciclastic sedimentary rock, which is generally characterized by a relatively high proportion of matrix. Carbonate rocks with a heterogeneous structure are u. a. called Wackestone (matrix-supported structure) or Packstone (component-supported structure).

There are different views as to which components of a sedimentary rock are to be addressed as a matrix and which are not. In the real sense, the matrix is ​​always a primary rock component, i.e. that is, it has been deposited more or less simultaneously with the components. If the deposition conditions prevented the separation of particles in matrix size, the interstitial space (“intergrain space”) can be filled with diagenetic excretions ( cement ) or with gases or liquids (e.g. air, methane, water, petroleum). The interstitial space that is not filled with mineral substance is also referred to as the pore space (see →  porosity , →  permeability ). The arrangement and size distribution of the grains as well as the texture and structure of the rock, including the presence or absence of matrix or cement, thus document the formation conditions and the further development of a sediment. However, some authors take the term matrix broader and include interstitial cement . However, since cement and matrix in the true sense of the word go back to different geological processes, they should not be equated, but rather summarized under the generic term "basic mass".

In limestone, fine-grained interstitial material can also occur as a secondary formation. This is then also not a matrix in the actual sense, but so-called microcrystalline cement. If it can be proven or made plausible that such a fine-grained or fine-crystalline material is of diagenetic origin, one also speaks of a carbonatic pseudomatrix . 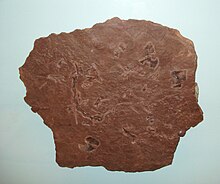 Scattered skeletal elements of a tanystrophic reptile in a matrix of red fine sand or siltstone, Upper Buntsandstein from Baden-Württemberg.

In the case of carbonate rocks in particular, the components in the matrix are not infrequently microfossils ** (e.g. globigerines or pteropods ). Paleontologists and paleobiologists who deal with macrofossils , on the other hand , refer to the rock in which such a fossil is embedded as a matrix ( host rock ) , regardless of the sediment petrographic definitions of the term . The matrix of a macrofossil can therefore be relatively coarse-grained or, from a sediment petrographic point of view, contain matrix and components. The use of the term matrix for the rock surrounding macrofossils only makes sense if there is a clear material difference. In traditional forms such as imprints or stone cores, the material of which the fossil and matrix are made is largely identical.

Even with coarse-clastic rocks, conglomerates and breccias , the fine-grained material that is located in the space between the pebbles or fragments is sometimes referred to as a matrix , in a similar sense to that of macrofossil-bearing rocks (sometimes there are also overlaps, see →  Bonebed ). This means that grain sizes at least in the coarse filter range can also be included. A distinction can be made between clast-supported and matrix-supported facies.

The term matrix is sometimes used in the petrography of igneous rocks . Since the formation process of igneous rocks differs fundamentally from that of sedimentary rocks, the term base mass is preferable for the fine-grained (actually finely crystalline ) rock components. The coarser rock constituents are not called components, but rather inserts .

Brecciated rocks, which are created by movement on fault surfaces , contain not only relatively large fragments, but also material with grain sizes “in the µ range” that was either created through dynamic recrystallization or simply finely ground through intensive mechanical stress. This very fine-grained material is sometimes also referred to as a matrix . In the case of the Kakirites, tectonic breccias (<10 % matrix) are differentiated from broken breccias ( 10 to 50% matrix) and rock powder (> 50% matrix) on the basis of the matrix proportion . In the case of cataclasites , 10 to 50% matrix indicates a protocataclasite and more than 90% matrix indicates an ultra-cataclasite .

*The term components is only used if there is actually also very fine-grained material in the rock that can be referred to as a matrix. Otherwise one just speaks of "grains".
**While microfossils are in the size range of components, so-called nannofossils , such as coccoliths , can form the complete matrix of a limestone.