This article covers the scientific exploration of the polar regions. For the journal of the same name, see Polar Research (journal) .

As polar research scientific is exploring the polar regions Arctic and Antarctic referred.

Its beginning can be set at around the 18th century. The main research topics were initially meteorology , geophysics , general geography and oceanography .

In the Arctic, the main focus was initially on the discovery of new land areas or waterways and shorter connections from Europe to Asia . When it became clear that the direct route via the North Pole was not (as initially suspected) free of ice, many expeditions went in search of the Northeast Passage (north of Asia) and the Northwest Passage (north of America). In the south, on the other hand, the focus was on exploring the continent of Antarctica , which was discovered in 1772 .

At the end of the 19th and beginning of the 20th century, conquering the geographical poles became the main theme. At the same time, the development of comprehensive, interdisciplinary research into the polar regions began with a focus on geophysics , oceanography , glaciology and biology .

Since the establishment of governance structures and economic use in the polar regions at the latest , beginning at the end of the 20th century, other disciplines, including legal , political , economic and cultural studies , have increasingly been concerned with research questions relating to polar research.

In the 1870s there was a move towards the internationalization of polar research. The first International Meteorological Congress in Vienna recommended the establishment of meteorological stations in the polar regions in 1873. In a lecture on September 18, 1875 at the 48th meeting of the Society of German Natural Scientists and Doctors in Graz , Carl Weyprecht , who led the Austro-Hungarian North Pole Expedition from 1872-74 together with Julius Payer , presented his basic principles of arctic research . He took the view that “arctic research is of the highest importance for the knowledge of the laws of nature”, but that individual series of observations are only of relative value.

Weyprecht and the presidents of the International Polar Commission founded in 1879, Georg von Neumayer and Heinrich von Wild , succeeded in gaining support from the governments of several European countries and the USA for a joint research project and the establishment of geophysical observation stations. 1882–1883 ​​the first International Polar Year took place with the participation of eleven states with twelve fixed stations in the Arctic and two in the sub-Antarctic . In particular, work in the fields of meteorology and geomagnetism as well as research into the aurora borealis was carried out according to a previously agreed program.

The Polarstern is the only research icebreaker in Germany and with a length of 118 meters it is the largest German research ship in front of the sun , which is 116 meters long. The Polarstern was put into service in 1982 and has been shuttling between the two poles of the earth ever since: In the summer of the northern hemisphere , scientists research the Arctic, in the southern summer the Polarstern sets course for the Antarctic, in addition to the scientific expeditions to take the German research station Neumayer III out of her to supply enormous cargo hold with food, scientific equipment and fuel for the polar planes, helicopters and the operations of the station. Every year in spring and autumn she stops in Bremerhaven on her journey between the poles : In her home port she is made fit for the next voyage, refueled and loaded with scientific equipment and provisions. The icebreaker has a double-walled hull and reinforced steel plates on the bow and on the ice belt, so that it can effortlessly break through ice up to one and a half meters thick. If the ice is thick, the Polarstern rams its way free: During a ram trip, it pushes itself - usually with several attempts at full power (almost 20,000 hp) - onto the ice, which then breaks under the weight of the ship. There are usually two helicopters and rubber dinghies on board, which the scientists can use to take measurements away from the ship. Due to its high weight, the Polarstern has a draft of 11.20 meters. 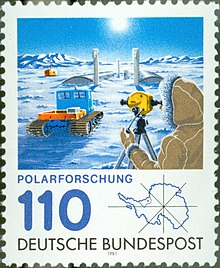 Postage stamp of the Deutsche Bundespost from 1981: It shows the buildings of the first Georg-von-Neumayer-Station, which was set up in the same year

The explorations using permanent or operated only in the summer months research stations continues to this day. In the Arctic, ice drift stations also emerged on larger ice floes that drift across the Arctic Ocean for a long time . The joint German-Russian Arctic expedition from 1931, which began with 46 participants on July 24th in Friedrichshafen with the airship " LZ 127 Graf Zeppelin ", after stopovers in Berlin- Staaken and Saint Petersburg via Finland into the northern Barents Sea and was successfully completed on July 30, 1931. As the northernmost point, the last isles of Franz-Josef-Land (the Liv and Eva Islands, which Fridtjof Nansen had reached in 1895 after a week-long ice hike) were crossed. Then, after driving 600 km along the 81st degree of latitude, one reached the northern tip of "Nordland" (Severnaya Zemlya), trying to gain new knowledge about this region from the air, as almost nothing was known about it.

On the basis of the environmental protection plan for the Arctic, the Arctic Environmental Protection Strategy and a recommendation of the Arctic Council , a university network with a virtual university in the Arctic ( UArctic ) was established in 2001 . This promotes education and interdisciplinary research in the Arctic region. The Bachelor of Circumpolar Studies can be obtained.