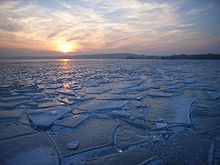 Ice floes on the Ammersee

Ice floes are flat pieces of drift ice . They arise when previously closed ice surfaces heat up and drift apart on still and flowing waters such as rivers, canals, oceans, lakes and puddles.

The ice always consists of frozen fresh water. When salt water crystallizes into sea ​​ice , the salt is released into the surrounding water or concentrated in salt inclusions. First of all, Frazil ice is created , which is ice needles on the surface of the water. These clump together to form ice sludge . When there is sufficient swell, pancake ice forms , which are circular ice floes with a bulging edge.

In Silesia and Brandenburg, round ice floes with a bulging rim are called "Brieger geese" on rivers. The name is derived from the regular occurrence of this form on the Oder near Brzeg (German Brieg) and the noises these ice floes make when they hit groynes and bridge piers.

Ice floes floating on rivers can pose a threat to bridges. They can accumulate between the pillars as a so-called ice rush and thus exert high loads on the structure.

The huge ice masses ( icebergs ) that break off the continental ice of the Arctic or Antarctic are sometimes colloquially referred to as ice floes.

One phenomenon so far has been the occasional occurrence of circular ice floes, so-called ice circles , which do not arise from previously closed ice surfaces.