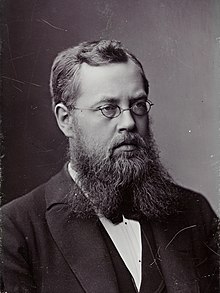 Lie studied from 1859 to 1865 in Christiania (later Kristiania, now Oslo) natural sciences and in 1862 heard lectures on group theory from Peter Ludwig Mejdell Sylow . In 1865 he passed the real teacher examination and was initially undecided about his further career. It was not until 1868 that he turned to mathematics . His first mathematical publication, which appeared in 1869, earned him a travel grant . He used this for stays a. a. in Berlin , Göttingen and Paris . The acquaintance and friendship with Felix Klein , with whom he traveled to Paris in 1870 and wrote joint works on transformation groups, was decisive for Lie's further career . In 1872 Lie became a professor in Christiania, and in 1886 he was appointed to Leipzig as Klein's successor (who moved to Göttingen) . Lie suffered - as was later diagnosed - from pernicious anemia , which together with difficulties in the scientific environment led to a nervous breakdown in 1889 . In addition, Lie fell out with his colleagues Friedrich Engel and Klein over priority issues. From 1892 Norwegian personalities, above all Nansen , Björnson and Elling Holst, tried to get Lie back, on the one hand out of concern for him, on the other hand for reasons of national patriotism. In 1894 the Norwegian parliament gave him a personal professorship with a corresponding increase in salary in Christiania. However, Lie did not return to Norway until 1898, seriously ill , and privately taught a few of his mostly succeeded students. He died in February 1899 of pernicious anemia, which was incurable at the time .

His parents were Johann Lie , from 1851 pastor in Moss on the Kristianiafjord, and his wife Mette Stabell . Sophus Lie married Anna Birk (1854–1920) in 1874 ; she was the daughter of the chief customs officer Gottfried Jörgen Stenersen Birk and his wife Marie Elisabeth Simonsen . The couple had a son Herman (1884–1960) and two daughters. Marie (* May 21, 1877) married the later ophthalmologist Friedrich Leskien, son of August Leskien in 1905 ; together with her husband she translated works by Alexander Lange Kielland into German. Dagny Lie (born July 5, 1880, † December 28, 1945) was married to the pharmacologist Walther Straub (1874–1944).

Lie established the theory of continuous symmetry and used it to study differential equations and geometric structures. Continuous or constant symmetry operations are, for example, displacements and rotations by any amount, including infinitesimal, in contrast to discrete symmetry operations such as mirroring. On the basis of his work, u. a. developed an algorithm for the numerical integration of differential equations ( Lie integration ) or the method of base point transformation .

In order to investigate and apply continuous transformation groups (today called Lie groups ), he linearized the transformations and examined the infinitesimal generators. The connection properties of the Lie group can be expressed by commutators of the generators; the commutator algebra of generators is now called Lie algebra .

Many other terms and phrases are associated with Lie's name, including a. Lie bracket , Lie's sentences , Lie theorem , Lie product formula . 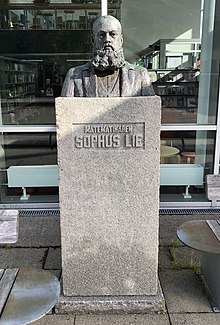 His place of birth, Nordfjordeid, erected a memorial for him and named a street after him.