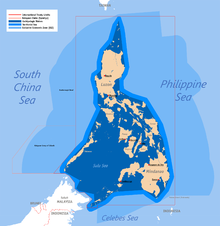 As archipelagic waters are territorial waters referred to that between the islands of the archipelago an island state located. The possibility of establishing archipelago waters, recognized under international law, was created with the UN Convention on the Law of the Sea of 1982. However, the Philippines in particular had long claimed them and they had been discussed at several maritime law conferences since 1930. In addition, Indonesia practiced archipelago waters even before the drafting of the Convention on the Law of the Sea.

The archipelago waters according to the Convention on the Law of the Sea are delimited by a line that connects the outer coastal points of the archipelago, which does not have to encompass the entire state, in a straight line. The individual straight sections of the line may not be longer than 100 nautical miles (185.2 km), with the exception of a numerical proportion of three percent of these lines, which may be up to 125 nautical miles in length. Within the enclosed area, the ratio of water area to land area must be between 1: 1 and 9: 1.

The archipelago waters stand legally between the territorial sea and the internal waters: They are subject to the territorial sovereignty of the archipelago state. As baselines, its boundaries also form the basis for the delimitation of the other zones under international law that it can claim. However, other states have the right of peaceful passage .