Round paper clip, galvanized with disarmed ends; this version is common in Japan, but also in Italy. The round design reduces the deformation of the paper clips, which are laid one on top of the other and pressed together by the clip, and are dented in the process compared to the paper clips shown above, whose forces act over a smaller area and thus with greater pressure on the paper

A letter clip or paper clip is an auxiliary item in the office that is used to releasably attach several sheets of paper to one another. Paper clips are usually made of bent metal wire and are around one to seven centimeters long with an aspect ratio of around 3 to 5: 1.

The origin of the invention of the paper clip is unclear. Paper clips have been manufactured by The Gem Manufacturing Company in England since about 1890 . William Middlebrook of Waterbury , Connecticut was granted a patent in 1899 for the industrial manufacture of paper clips.

On November 12, 1899, the Norwegian Johan Vaaler from Kristiania ( Oslo ) applied for a German patent on a forerunner of today's paper clip, which he did not market. This paper clip did not yet have the inner curl that is common today and was significantly rounder.

Today's variants of the paper clip come in numerous sizes and shapes. Larger specimens are also records clips called because it for stapling of Quick stitchers u. Ä. Are suitable. They are also made of plastic , which can be printed depending on the version. The plastic variants, however, sometimes differ greatly from the classic paper clip shape and are less stable due to the material used.

Paper clips made of metal wire are most commonly used in everyday office life. They are either zinc plated , brass or copper-plated to a rusting to prevent what would pollute the joined sheets by corrosion. Wire paper clips are also coated with (colored) plastic.

To prevent scratches and other damage to the paper when the paper clip is pushed on, there are rare designs with spherical or rounded wire ends. 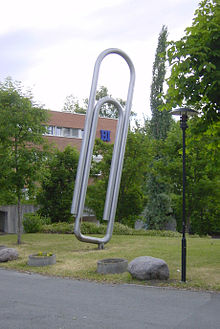 A memorial to the paper clip in Sandvika (Norway, 2004)

During the Second World War , Norway was occupied by the German Wehrmacht in April 1940 , whereupon the Norwegians introduced the wearing of a paper clip on the collar or lapel as a symbol of solidarity with the king and government. The paper clip should stand for "holding together" the Norwegians. Open wearing was quickly banned by the occupiers, but the paper clip on clothing - even if worn concealed - remained a characteristic of the resistance fighters and their sympathizers until the end of the occupation. Even today it is a kind of Norwegian national symbol for the resistance against the German occupiers and the cohesion in the population.

Users of earlier Macintosh computers know the paperclip as an important tool for ejecting floppy disks if the software-controlled ejection via servo motor did not work. Today's PCs have a comparable system for emergency ejection of CDs. A thin wire must be inserted into a small hole in the device housing to eject the data carrier. In offices, this wire is often only found in the form of paper clips, which are bent open for this purpose.