The Vermont State House in Montpelier is the seat of the government of the state of Vermont . With its gold leaf dome against the background of the changing canopy of a nearby park , many tourists consider it the prettiest government building in the United States . 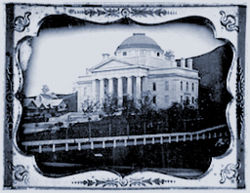 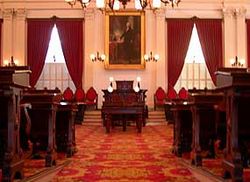 Originally, the Vermont MPs met alternately in different cities on a rotating basis . In 1805 the deputies decided that it was time to stop wandering around the seat of government due to the city's central location and the inexpensive building land . The MPs decided to meet in Montpelier with immediate effect. This was decided under two conditions. First, Montpelier had to make the land available for the Capitol. Second, the state capitol had to be completed by September 1808. Thomas Davis, son of Montpelier's first permanent settler, Col. Jacob Davis, provided the land and the first house of parliament was built at a cost of $ 9,000. After the first parliament became too small, a new one was built. The second parliament was designed by Ammi Young and completed in 1838 at a cost of $ 132,000. Even a conflagration on a cold January night in 1857, which destroyed the impressive successor building from 1838 except for the granite walls and the portico , could not prevent the Vermonters from building the current Capitol building on its basis . The new blueprints were based on Young's, but the scale was increased and the ornaments were built in the Renaissance style popular at the time . This capitol was built in two and a half years for $ 150,000. It was completed in 1859 and expanded in 1888, 1900 and 1987.

According to many experts, the Senate Hall is considered to be the most beautiful interior space in the state.

In December 1970, the State House was granted National Historic Landmark status and was listed as a building on the National Register of Historic Places .

State Capitols of the states , federal district, and the suburbs of the United States