Waterbury is a city in New Haven County in the state of Connecticut in the United States of America . It is the fifth largest city in Connecticut with just under 110,000 inhabitants (2016 estimate).

Due to its past as a major center of brass production and processing, the city is nicknamed Brass City (German: Brass city ). This past is also echoed in her motto Quid Aere Perennius (German: What is more durable than brass? ). Waterbury is one of the easternmost cities in the ruined Rust Belt industrial area and faces significant economic and social problems. The magazine Forbes included the city in 2008 to the places in the US that the worst conditions for business and career would offer.

The city is also known nationwide for the fact that four of its mayors have been charged with criminal offenses in office since 1940 . Three of them were sentenced to long prison terms, the last being Philip Giordano in 2003.

Waterbury is located in the hilly and wooded north of New Haven County and is part of central, western Connecticut. The city is located 33 miles southwest of Hartford , Connecticut's capital.

Waterbury was built on a rocky plain on the middle reaches of the Naugatuck River . This area of ​​the river is also known as the Central Naugatuck Valley . The city is surrounded by granite elevations to the east and west . The eastern part of the city is traversed by the Mad River , which then turns west and flows into the Naugatuck in the urban area . The mean height of the city is 82 m; its lowest point at 65 m and its highest at 294 m above sea ​​level .

Waterbury is in the temperate climate zone and has a humid continental climate (Zone Dfa according to Köppen and Geiger ). Spring and autumn in Waterbury are marked by fresh winds. Summers are warm and humid; the winters cold and dry. The mean January temperatures are -5 ° C and the mean July temperatures are 22 ° C.

July is the warmest month and January is the coldest. The highest measured temperature was 38 ° C (July 1995) and the lowest -30 ° C (January 1961). The most abundant rainfall falls in September.

The history of the city of Waterbury begins with the southwest expansion of the Connecticut colony founded in 1639 . At that time, today's urban area was claimed by two Algonquian-speaking Indian tribes : on the one hand by the Tunxis, who settled west of Hartford, and on the other hand by the Paugussett , who settled east of the Housatonic River . The area was called Matetacoke , Matitacoock or Mattatuckokë (German: place without trees ) by its natives . The Indian name is mentioned for the first time in 1654 in a land title of the two Farmington settlers John Standley and John Andrews . and probably refers to the grazing grounds of the Naugatuck floodplain .

On October 9, 1673, 26 Farmingtoner settlers submitted a petition to the Parliament of the Connecticut Colony ( General Court ) asking for permission to plant a plantation at Matitacoock . The General Court upheld this on the same day. The actual start of the European conquest of present-day Waterbury falls in 1674. The land was gradually transferred to the settlers in three treaties from 1674 to 1685 by the Tunxis and one by the Paugussett for single-digit pounds .

In abbreviation of the Indian name variants, the name of the plantation was registered on May 18, 1674 as Mattatuck . The settlers had to leave Mattatuck as early as 1675 during King Philips' war , but returned in 1677. In the course of the granting of city rights ( town ship ) as the 28th city of the Connecticut colony on May 15, 1686, the name was changed to Waterbury . In 1691 the colonial administration of the city allowed the establishment of an independent parish. 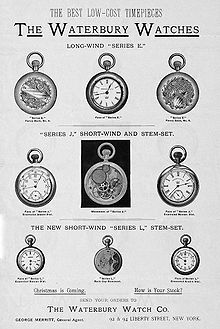 Advert for Waterbury clocks (before 1890).

During the American Revolutionary War , the majority of the population committed to the cause of the young republic. Almost 700 inhabitants of Waterburys are said to have fought in republican military units, while around 70 to 80 inhabitants fought for the England-loyal, loyalist side. Most of their property was confiscated. The loyalist Moses Dunbar from Waterbury was exemplarily hanged in Hartford in 1777 for alleged high treason .

The industrialization Waterbury began in the late 18th and early 19th centuries. Before that there were already grain mills and sawmills that used the existing hydropower. The oldest company still in existence today is the zinc processing company Platt Bros. & Co. (founded in 1797). In 1802 the Abel Porter & Co. company began producing brass, which was new for the USA. The company later became part of the Scovill company . The Waterbury Buttons ( button manufacturing ) and Waterbury Companies ( conglomerate ), both founded in 1812, also date from this time.

From the middle of the 19th century, however, brass processing companies and watch manufacturers that had disappeared or had merged with other companies were dominant, for example Chase Brass & Copper (founded in 1837; now based in Ohio ), American Brass Co. , Benedict & Burnham , Waterbury Clock Co . (now part of Timex ) or Waterbury Watch Co. . Waterbury and the region along the middle reaches of Naugatuck were at this time as the brass capital of the world ( Brass capital of the world ) and the American Switzerland . In the 19th century, the city's population grew rapidly from a good 3,000 in 1800 to over 50,000 in 1900. The prosperity of that time is still evident today in the impressive architectural legacy from the late 19th century. In 1894 the city received an electric tram , the route of which later extended well beyond the actual city area (abandoned in 1937).

Between the wars and the Second World War 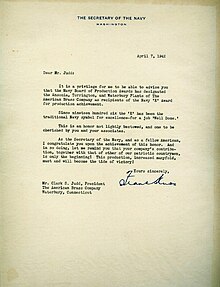 Letter of thanks from the US Navy to American Brass (1942).

The successful development of the city and economy continued until around 1930. In the 1920s, important urban facilities such as the Palace Theater or the Lewis Fulton Memorial Park were built . The global economic crisis from 1929 onwards, however, represented the first major turning point in Waterbury's long economic decline: The high unemployment led to a stagnation in population growth that continues to this day.

1938 one of the country's first advisory centers was birth control in a public institution, which for Waterbury Hospital belonging Chase Dispenary opened. In 1994, the historian Garrow pointed out the importance of this event for the later fundamental legal decision in the Roe v. Calf down.

In 1939/40 research by the daily Waterbury Republican led to the conviction of the corrupt mayor T. Frank Hayes ( Democratic Party ) and 22 other defendants to long imprisonment. The newspaper received the Pulitzer Prize in the Public Service category for this in 1940 .

The Second World War brought a revival in Waterbury as part of the switch to war production. The importance of the industrial location led to the fear of becoming a possible target of German air strikes . A newly built time fuse factory of the Waterbury Clock Co. was built into the mountains near Middlebury , camouflaged against air attacks and structurally prepared for flooding in the event of an invasion.

Development of the population of Waterburys from 1756 to 2000.

In the first almost 200 years of the city's existence, population growth stagnated . Since the second half of the 19th century, there has been a sharp rise in the number of inhabitants in the course of industrialization. This development broke off with the Great Depression in the early 1930s. Since then, the city has seen minimal population growth, with a temporary decline in population in the 1970s.

The city council ( Board of Aldermen ) consists of 15 councilors ( aldermen ) and every two years is chosen. He rules the city together with the mayor. There are currently nine members of the Democratic Party and two of the Republican Party . Four councilors are independent.

The current mayor Michael Jarjura (Democratic Party) has been in office since 2002. He was elected for the first time in 2001 and has been confirmed in office three times since then. In his second re-election, Jarjura ran as an independent candidate as he was not nominated in his own party's primaries .

Jarjura succeeded Republican Sam Caligiuri , who served as administrator for Philip Giordano, who resigned in 2001. Giordano was arrested for sexual offenses in mid-2001 as part of a corruption investigation and sentenced to 37 years in prison in 2003. Giordano was the fourth mayor of Waterbury to be indicted in office:

Waterbury is sending five MPs to the Connecticut House of Representatives and two Senators to the State Senate . There are currently three Democrats and two Republicans. Democrats and Republicans each provide one of the two senators.

In the US House of Representatives elections , Waterbury is part of two constituencies . Its residents are therefore involved in the election of two MPs. Currently the city and the surrounding area are represented by Rosa DeLauro and Chris Murphy ; both are democrats. In the last US Senate election , Joe Lieberman received 52.2% of the vote from Waterbury.

Economic situation of the municipality

From 2001 to 2007 stood household of the city Waterbury under forced administration of the State of Connecticut ( Waterbury Financial Planning and Assistance Board ). Previously, the city's bonds had been classified as speculative (grade BB) by the rating agency Fitch in December 2000 due to a high structural deficit . Since 2008 the city has taken responsibility for its own budget again.

The largest stage in Waterbury is the Palace Theater , a guest theater opened in early 1922 without its own ensemble . It was closed in 1987 and only reopened at the end of 2004 after extensive renovations. The Palace Theater has 2,565 seats and is the largest performing arts house in Connecticut (see also "Buildings" ).

The Seven Angels Theater is a smaller house for drama , musicals and children's theater with its own ensemble.

Waterbury has an extensive architectural heritage from its industrial heyday from the mid-19th century through World War II. Numerous architects or architectural firms of national or international standing have worked for the city, its companies or its residents, among others. a. Cass Gilbert (1859–1934), the architect of the New York Woolworth Building , Henry Bacon (1866–1924), who was best known for the Lincoln Memorial , the theater architect Thomas Lamb (1871–1942) or the New York architecture firm McKim, Mead, and White . Twenty structures and five building complexes in Waterbury are listed on the National Register of Historic Places , including:

Other notable structures in Waterbury include:

The Carrie Welton fountain with Waterbury's old town hall (before 1897).

Nine of the ten largest employers in Waterbury are in the tertiary sector (services); the public sector has the largest share.

The largest taxpayer is the GGP-Brass Mill shopping center . Companies of national importance and headquartered in Waterbury are the commercial bank Webster Bank (founded in 1935) and the specialty chemicals company MacDermid (founded in 1922). None of the big companies that shaped the city's industrial past are based here: Scovill moved to Georgia and Timex to neighboring Middlebury.

Waterbury is one of the terminus of the New York Metro-North , a regional train that connects areas north of New York with Manhattan . Hartford , Boston and New York to Waterbury via the highway Interstate 84 are achieved, the main road in Waterbury Route 8 crosses.

The commercial airport Waterbury-Oxford ( IATA code: OXC) is located about 10 km southwest of downtown Waterbury and are designed mainly for private business and charter flights used. However, it is not used in scheduled services. The next significant airport with scheduled flights is Hartford (IATA code: BDL). In addition, New Haven Airport (IATA code: HVN) has a few domestic scheduled connections.

In Waterbury is the Post University , which developed from a college to a specialized university in 1990 by drawing on the Teikyō University in Tokyo . The University of Connecticut also has a campus in Waterbury.