Under Orientalism in art refers to representations and (often imitative) uses Near and Far Eastern motifs by European artists.

Orientalism in Painting and the Applied Arts 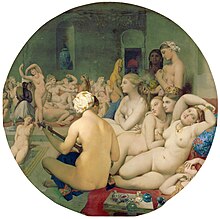 Representations of "Moors" or "Turks" can be found here and there as early as the Middle Ages, not least in connection with armed conflicts. In the 18th century, based on the role of porcelain as an exclusive import good, the fashion of the chinoiseries spread in European castles, while distant China became a mythical place of wisdom , especially during the Enlightenment . In the 18th and 19th centuries, after the end of the expansionary phase of the Ottoman Empire and in connection with the increasing attempts at domination of European powers over the Islamic world, an almost romanticizing view of the Orient spread. Napoleon's military campaign in Egypt (1798–99) promoted interest in the era of the pharaohs and a corresponding fashion, primarily in the applied arts ( Egyptomania ), the Greek War of Independence (1821–1829), the Crimean War (1854–1855) and the opening the Suez Canal (1869) increased interest in the Middle East.

Numerous European painters of the 19th and early 20th centuries paid homage to the myth of the Orient as a place of sensuality and decadence . Above all, the harem scenes , which were very popular at the time , should be mentioned here. Eugène Delacroix , Théodore Frère , Jean-Léon Gérôme and later Alexandre Roubtzoff dedicated many of their works to the Islamic culture. Jean Auguste Dominique Ingres , head of the French Académie de peinture, painted his famous “Turkish Bath” in 1863. The sensuality of such scenes was made acceptable to the European world by the orientalizing decor.

There were also numerous “oriental painters” in the German cultural area, such as Gustav Bauernfeind , Eugen Bracht , Georg Macco , Adolf von Meckel , Leopold Carl Müller , Johann Victor Krämer and Carl Wuttke , who provided their bourgeois audience with sensual and picturesque scenes. Interest in the Orient and its architecture was also encouraged by the world exhibitions , namely those of 1855 and 1867 . Japonism , which emerged in the last third of the 19th century, influenced impressionist painters and artists such as Vincent van Gogh , who copied some of Hiroshige's woodcuts in his early years .

Motifs of oriental architecture already appeared as set pieces in numerous palace gardens of the 18th century. Examples are the “mosque” in the park of Schwetzingen Castle , corresponding buildings in Eisgrub (Lednice) or Kew . Numerous " pagodas " also date from this period . The steam engine house in the form of a mosque, which was built around the middle of the 19th century, is one of this type of exotic accessories. Here, too, the following applies: The elimination of the immediate warlike threat made it possible to deal with the stylistic elements of neighboring cultures more freely and in some cases in a more romantic way. In the late 19th century, plus the subject of growing commercial-style combination and the use occurs exotic architectures as an element of publicity , so when Yenidze -Zigarettenfabrik in Dresden , in the oriental architecture of Zacherlfabrik the raw material of Zacherl'schen Motte powder in Vienna (came from the Middle East), and at the Villa Crespi of a cotton industrialist with intensive trade contacts in the Arab region.

In general, in historicism, orientalizing décor was seen as part of the available stock of symbolically usable style elements and used for specialized construction tasks, for example for synagogues , for which the “Moorish style” became typical for a time. The same applied to the ritual architecture of numerous Masonic temples built between 1870 and 1930 in the USA, namely for buildings by the Shriners . Oriental décor was also used in the entertainment industry and for instruction, in particular at world exhibitions, in amusement parks and bars (e.g. Vauxhall (London), Tivoli (Copenhagen) and Bataclan (Paris)), in large cinemas from the silent film era ( e.g. Grauman's Chinese Theater or Grauman's Egyptian Theater ) and in the context of zoological gardens.

Orientalism in Music, Literature and Film

Both in European art music as well as in everyday and popular music of the past centuries, influences from the Orient and orientalizing fashion trends can be observed. This applies, among other things, to Janissary music, which had a significant influence on the development of European marching music, but also to the genre of opera and operetta - from Wolfgang Amadeus Mozart's Die Entführung aus dem Seragl to Giacomo Puccini's Madama Butterfly and Turandot to Franz Lehár's Land des Smiles and The Mikado by Gilbert & Sullivan . As in the field of the visual arts, there is often a romanticizing and sentimentalizing use of exotic motifs (such as the pentatonic scale ); the stage works often pay homage to the erotic charm of Far Eastern femininity.

In the field of “high” literature, Orientalism is evident in examples such as Montesquieus Lettres persanes , Goethe's West-Eastern Divan and the work of Pierre Loti should also be mentioned. The oriental decor in numerous of Karl May's (fictional) travelogues is characteristic . Numerous silent films, such as B. Sumurun by Ernst Lubitsch or L'Atlantide by Jacques Feyder demonstrate the interest in orientalist acts and exotic decorations even in the early phases of film history. This fascination is continued in the trivial literature of the 20th century and the films based on it, from The Tiger of Esnapur to the ironic paraphrases of the Indiana Jones series. 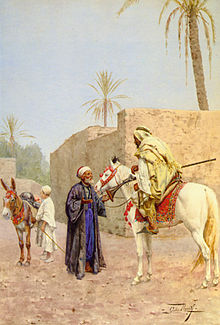