Indiana "Indy" Jones (actually Dr. Henry Walton Jones Jr. ) is the fictional main character from the adventure film series of the same name . The first three films were made in the 1980s. In the 1990s, George Lucas produced a canonical television series. A fourth film was not made until 2008. All four films were directed by producer George Lucas and director Steven Spielberg , with Harrison Ford playing the lead role in all of the films . Because of the great success of the films, numerous novels, comics, cell phone and video games deal with the character of Indiana Jones.

So far, four Indiana Jones movies have been made:

The first three feature films were great hits when they were released and are still considered cult films to this day . The fourth film was made almost 20 years after the third film, as part of a trend in the film industry towards late sequels to earlier successful film cycles.

A further continuation of the Indiana Jones series seemed unlikely for a long time, although rumors like this arose again and again after the fourth film. In 2012, George Lucas retired from the film business and sold his Lucasfilm company to the media company The Walt Disney Company . In March 2016, Disney announced a fifth installment in the series, again starring Harrison Ford in the role of Indiana Jones. The film should hit theaters in July 2019 and be produced with Steven Spielberg as director. David Koepp , who had also worked on the fourth film, was hired as the scriptwriter . Lucas remained involved as executive producer.

After the theatrical release was postponed to July 2020 about a year after the announcement, Spielberg mentioned in March 2018 that filming for the fifth part should start in the UK in April 2019. A little later it became known that Jon Kasdan replaced Koepp as screenwriter and that the late theatrical release could not be kept again, so that the film was postponed to July 2021 shortly afterwards. In May 2019, Dan Fogelman was traded as the new scriptwriter because Kasdan no longer worked on the project. A few months later, Koepp mentioned writing the script again. In February 2020, Ford indicated that filming would begin shortly. Spielberg took over the position of producer to let someone else direct a film in the series for the first time with James Mangold . During the 2020 coronavirus pandemic , Disney postponed the theatrical release again by one year to July 2022. Koepp, who had prepared several script versions for Spielberg, also ended his work to give Mangold the opportunity to contribute his own ideas for the film.

Harrison Ford on the set of the fourth movie 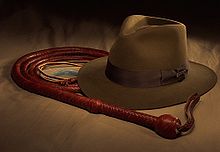 In the films and other products sold under the Indiana Jones brand , a biography of the fictional character Indiana Jones is told. Accordingly, Indiana Jones, in short Indy or Jones , under the real name Henry Walton Jones, jr. born July 1, 1899 in Princeton , New Jersey . The archaeologist , who received his doctorate from the University of Chicago in June 1922 , not only works as a quiet scientist at a university and as a professor at a college, but also travels the world as an adventurer. He deals with religious and occult phenomena, searches for legendary relics and tries in particular to preserve cultural goods for the general public. In the first film he seeks the ark , in the second adventure he comes into a temple of the goddess Kali and explores the Shankara -stones, in the third part he finds the Holy Grail and the fourth film is about a crystal skull of the Inca . In addition, he experienced many other adventures in his youth, during which he met very well-known people and took part in important events. He was at least 93 years old.

Since the first three cinema adventures are set in the 1930s, the National Socialists , who often orientated themselves on ancient models , appear as opponents in the first and third films. In three cinema films the adventurer is accompanied by a woman, in the "last crusade" his father, Professor Dr. Henry jones sr. by his side. His son Mutt Williams appears for the first time in the fourth cinema adventure, which takes place almost twenty years later. Typical characteristics of the Indiana Jones are the fedora and its whip . Jones has a snake phobia, which in the third movie was explained by the fact that the young Indiana fell into a circus car full of snakes while fleeing from persecutors.

Various possible role models for Indiana Jones have been suggested, including the American archaeologist Hiram Bingham , who uncovered and explored the ruined city of Machu Picchu in 1911 . However, Lucas and Spielberg never named a specific role model. Initially, Indiana Jones should be called "Indiana Smith"; However, Steven Spielberg pushed through a change. George Lucas's dog originally bore the name "Indiana". This fact is alluded to in the third movie when the viewer learns that Indiana Jones named itself after his family's dog. Lucas had worked with Harrison Ford on American Graffiti and Star Wars .

Tom Selleck was originally intended for the role of Indiana Jones in the movies. He completed some test recordings, which are included as bonus material in the DVD collection of the original cinema trilogy. Selleck could not accept the role, however, because he was not available because of the shooting of the series Magnum . But Tom Selleck got his chance anyway: In Magnum episode 159 ( Legend of the lost art , English title: A legend lives ) he follows in the footsteps of the famous archaeologist, whom he was unable to portray in the films, in proper style Whip and slouch hat in search of lost artifacts.

The film music was written by the American composer John Williams , who is responsible for every score in the Indiana Jones films. He composed the "Raiders March", which also became popular outside the fan base. Williams composed leitmotifs for each individual part:

Part 1: The well-known title melody appeared on this soundtrack for the first time . A theme for the character Marion and a theme for the Ark of the Covenant were also written. Fight scenes were also given extravagant support. A characteristic feature is the constant involvement of the well-known fanfare.

Part 2: In this part the march was used the most and was quoted over and over again. New topics were written for the boy Short Round and for Indy's new crush. Williams also composed a theme for the kidnapped children.

Part 3: For Part 3 Williams composed a theme for the Grail, for Indiana Jones' father and a march for the Nazis (which in a slightly different form also in the scenes during the conquest of the planet Naboo by the Trade Federation in the film Star Wars: Episode I - The Phantom Menace is used). It is noticeable that the “Raiders March” is rarely quoted.

Part 4: Leitmotifs were also written for this part. Williams wrote a theme for Indiana Jones' son, a theme for agent Irina, and a musical theme for the crystal skull. In addition, electronic tones were used for the first time in this soundtrack. These can be heard in the scene near Peru . However, many pieces of music were cited from the other three parts.

In 1992 and 1993 the (originally 44-part and later re-edited to 22 films) television series The Adventures of Young Indiana Jones (original title The Young Indiana Jones Chronicles ) was produced. In this series, Jones encounters real-life characters from history. It shows episodes from different periods of Indiana's life between the ages of 8 to 10, 16 to 20, 51 and 93 years; he is therefore also portrayed by various actors (such as Corey Carrier, Sean Patrick Flanery , Harrison Ford or George Hall).

In 2008 the American slot machine manufacturer Stern released a pinball machine called "Indiana Jones". In addition to the previous elements, elements from the fourth film , which appeared in the same year, were also integrated into the game .

In addition to the movies and the television series, there are over 40 novels featuring Indiana Jones' adventures. Some of the English-language books have been translated into German.

So far there are two novels by Martin Caidin :

So far there are four novels by Max McCoy :

A hitherto untranslated novel was published by Steve Perry :

While the aforementioned novels form independent stories, four novels published in 2008 deal with the content of the films:

In addition, in 2008 four more novels were published by Panini Verlag on the films, which are called youth novels due to the somewhat simpler spelling:

In 1991 the publisher Dark Horse Comics took over the license, and by 1996 he published numerous mini-series, including an adaptation of the popular video game Indiana Jones and the Fate of Atlantis . Four of these series were translated into German and appeared in 2000 and 2001 by mg publishing .

In addition, Dark Horse published twelve booklets based on the television series The Adventures of Young Indiana Jones . The first six issues were translated and published by Bastei-Verlag.

With the start of the new movie, Dark Horse took over the license that had now expired. In addition to a comic adaptation of Indiana Jones and the Kingdom of the Crystal Skull , new miniseries (including "Indiana Jones and the Crypt of the Gods"), Indy comics for children and anthologies of older issues were announced. The film adaptation and the Crypt of the Gods was released in German by Panini Comics .

The film character Indiana Jones tries again and again to preserve cultural assets such as historical treasures, relics, documents and sites for the general public and posterity as part of his adventures. He fights against grave robbers and fences. In the “real” world, the United Nations and its partner organizations such as UNESCO and Blue Shield devote themselves intensively to the protection of cultural property around the world. Stealing antiquities, robbery at archaeological sites, looting of cultural sites and the theft of art objects from churches, museums and archives should be prevented, as Indiana Jones tries in the films. From an international perspective, the employees of Blue Shield are often referred to as the new "Indiana Jones" because of their sometimes very dangerous and robust missions to protect cultural assets.