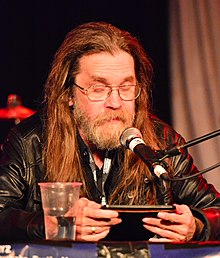 Wolfgang Hohlbein at a reading at the Hamburg Metal Dayz 2014

Wolfgang Hohlbein (born August 15, 1953 in Weimar ) is a German writer in the genres of horror , science fiction and fantasy literature . With around 43 million books sold, he is one of the most successful authors in Germany.

Hohlbein was born the son of a car mechanic and grew up in Krefeld . After leaving school, he trained as an industrial clerk and worked as an operator. He started writing during his night shifts. At first he wrote short stories, then horror novels and wild west novels. He initially published his works under numerous pseudonyms. Karl-Ulrich Burgdorf recommended him to Bastei-Verlag , which published his short stories and novels. In 1981, Hohlbein's first novel was published here for the Professor Zamorra series .

In 1982 Hohlbein won first prize in the Ueberreuter publishing house competition for the fantasy novel Märchenmond , which has also won several audience prizes such as the Wetzlar City Fantastic Prize and the Bookworms Prize. The book was a great success nationally and internationally and helped Hohlbein to break through as a writer. Märchenmond was the first of his books to be published in the USA in 2006 and premiered as a musical in Hildesheim in 2010.

Since then Hohlbein has published more than 200 books that have been translated into 34 languages, often in collaboration with his wife. He is considered the most widely read German-speaking fantasy and science fiction author.

A literary prize was named after Hohlbein, the Wolfgang Hohlbein Prize .

In 2013 and 2014, the documentary soap Die Hohlbeins - Eine totally fantastische Familie was broadcast on RTL II .

Hohlbein is married to Heike Hohlbein , with whom he has six children. His daughter Rebecca has also written several books.