Charles Théodore Frère (born June 21, 1814 in Paris , † March 24, 1888 ibid) was a French painter . He was brother of Pierre Edouard Frère and uncle of Charles Edouard Frère . His work can be assigned to orientalism .

Théodore Frère studied painting with Léon Cogniet and Camille Roqueplan . He made his debut at the Paris Salon of 1834 with a view of Strasbourg . However, this was obviously not his very first work (“Debut”), as he had already made a pencil drawing of Schlestadt (1871–1919 / 20: Schlettstadt; since 1920: Sélestat) in Alsace the year before (1833). He traveled to Algeria around 1836, witnessed the capture of Constantine by French troops on October 13, 1837, traversed the desert and toured Greece, Constantinople, Asia Minor and Syria and finally returned to Paris (France) around 1839. He traveled to Egypt for the first time between around 1851 and around 1854 and set up a studio in Cairo around 1853 .

In 1869 he accompanied the Empress Eugenie of France on her voyage on the Nile and carried out an album of watercolors from the areas there on her behalf. Then he settled in Cairo . His numerous genre or landscape treated pictures almost all depict life and goings-on in Algeria, Turkey and Egypt. 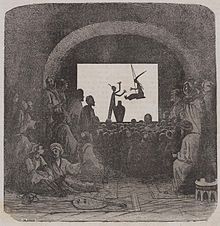