If a current intensity is to be measured that is greater than the maximum directly measurable current intensity in the adjacent picture, a shunt resistor is connected in parallel to the ammeter in order to expand its measuring range. It is designed in such a way that at the desired full- scale value, the portion flows through the measuring device and the (mostly larger) remainder flows through the shunt.

Standardized circuit symbol
for a shunt

The term shunt has evolved and also describes a current measuring resistor , that is a low-resistance electrical measuring resistor , often equipped with separate current and voltage terminals. This is inserted directly into the live line. With the voltage measuring device connected in parallel to this type of shunt , only a mostly negligible current is diverted.

50 A shunt with four-wire connection

In the case of high currents, a guide value greater than 10 A, the current measurement is usually carried out by measuring the electrical voltage on a shunt with a voltage measuring device. These shunts are often designed for a voltage of 60 mV or 150 mV at the nominal value of the current strength. The current strength in the shunt is calculated according to Ohm's law . Example: If the voltage drop is 55.0 mV across a shunt of 0.500 mΩ, the current is 110 A.

Electronic circuits with operational amplifiers can generate a current to ground or a voltage to ground from the voltage, which is usually “floating” at an increased potential.

2500 A shunt with 24 µΩ; the Kelvin connections are the two small screws

Shunts are mechanically robust for measuring high (> 100 A) currents, for example made of metal strips or rods with strong screw contacts for the load circuit (consumer circuit) and two smaller connections for the measuring device. Large shunts made of parallel metal rods can be screwed directly between busbars. Materials for the resistors are, for example, Manganin , Isotan , Isabellin , which are characterized by a low temperature coefficient of the specific electrical resistance and a low thermal voltage against copper. Sufficient heat dissipation is required.

Furthermore, small shunts are manufactured for soldering into printed circuits ; these too often have Kelvin contacts. Current measurement with a shunt has decreased somewhat with the advent of current sensors (these also offer potential isolation ), but shunts are an inexpensive and precise method of current measurement and are used in power electronics assemblies for current monitoring and control in addition to measuring devices . 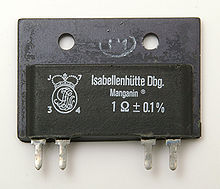 If a current intensity with short rise times or high frequencies is to be measured, special designs with low parasitic inductance must be used. Axial or even worse axially wound resistors cannot then be used. More suitable are bifilar wound resistors or special designs, such as the coaxial shunt, which consists of two tubes plugged into one another through which the current flows in opposite directions. Other low-inductance designs are the Möbius resistor or wave-shaped resistor foils.

Further examples with components connected in parallel for the task of deriving an electrical current from a circuit part:

However, these components are not referred to as shunt in common parlance - even in these applications.