This article refers to the rivet fastener . For other meanings of the word rivet , see rivet . For the use of rivets, see the riveting process . 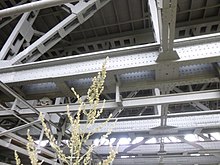 The deformation of the rivet during cold riveting creates a form-fitting rivet connection between several components. After hot riveting , when the rivet cools down due to shrinkage, a positive connection is created .

Rivets are mainly made of metals and alloys , but also plastics .

The word rivet comes from the Old High German word hniutan ("fasten"). In Middle High German , rivet should also stand for a nail that has been hammered wide .

The word is common in several forms and genera :

Both forms are increasingly mixing. You can find DIN standards on "rivets", also ÖNORMs on the plural "rivets".

Rivet on the fuselage

The advantage of rivets over screws is that none of the components have to be threaded . One disadvantage is that the connection cannot be released without being destroyed. However, this disadvantage is the most important advantage of this joining technology in some areas - precisely where permanent connections are important. This includes aircraft construction, in which riveted connections represent the essential basis of the structural components. In contrast to screw connections, which would have to be checked by complex measurements (torque, etc.), a form-fitting rivet connection can be recognized optically and without measuring effort on the formed closing head.

A rivet is a cylindrical (with the exception of special shapes) metal bolt with a thickened end - the head  . Depending on the intended use, different head shapes are processed, for example half-round, countersunk, flat-round and flat countersunk heads. The head of the rivet rests on one side of the workpieces to be connected. The shaft is pushed through the pre-drilled or pre-punched hole and deformed in width by pressure so that the workpieces are firmly connected to one another. The pressure may suddenly blow or continuously z. B. be applied by a hydraulic press . Rivets with a diameter of more than 8 mm are hammered warm , that is, heated to yellow embers in a forge , hammered in and the head shaped. When it cools down, the rivet contracts and clamps the workpieces to be joined. A distinction is therefore made between cold and hot rivet connections .

The classic full rivet connection is often replaced by the welded connection in technical applications . Riveting is only used where welding is not suitable, such as in lightweight construction or non-weldable materials, as well as when repairing old riveted connections.

Reasons for this can be:

The additional bending moment can only be offset by more complex, multi-layer connections (adjacent figure).

This article or section needs to be revised. Details should be given on the discussion page in the section Optical inspection of riveted joints . Please help to improve it , and then remove this flag.

The most important reason for the use of solid rivets is the simple production of riveted connections and the fact that the quality of the connection can be checked by simply looking at it without tools. This is probably the most important reason why solid rivets are used in safety-critical applications that are exposed to high continuous vibration loads. The secure fit of the connection is to be checked purely visually by the shape of the setting head.

The quality of the connection can thus be easily checked on aircraft in which the structure is secured by thousands of riveted connections. Furthermore, the resistance of a full rivet connection to continuous vibration loads is superior to any other joining method. For example, the aircraft ( DO24 ATT ) built by Dornier from 1937 is still in flight today.

According to the shape of the head, these rivets are also called half-round rivets and countersunk rivets.

The semi-tubular rivet corresponds to the solid rivet, but has an open end on one side that is spread or flanged by a mandrel instead of being shaped into a head.

A hollow rivet is a sleeve which often already has a collar formed on one side or a closed head.

Open ends are widened when the rivet is pressed together with specially shaped rivet setters or corresponding pliers and rolled outwards towards the material to be connected.

Hollow rivets are less resilient and are also used for decorative purposes (e.g. on belts ) or to reinforce holes in paper and cardboard.

Some hollow rivets are closed on one side and provided with a rivet cap on the opposite side so that no opening can be seen after upsetting.

After the base body has been inserted and the components to be connected have been pressed together, a ring is formed around the protruding grooved end of the rivet bolt. This makes it possible to increase the strength of the connection, since the rivet itself is not deformed and can therefore consist of hardened material.

With blind riveting, the joining process is carried out from only one (usually the outer) side of the component. The blind rivet is inserted through the hole from the opposite side, the components to be connected are pressed together by pressure on the head, then the mandrel protruding from the head is pulled out on the working side with a blind rivet pliers placed on the head. This leads to a compression and thus to an expansion of the rivet in and behind the hole. In the first phase, the upsetting shortens the hollow rivet body. This increases the diameter. At the end of the first phase, the hole is completely filled by the rivet. Only when the blind rivet cannot expand further in diameter does a noticeable widening form behind the hole. At the end of the process, the mandrel tears off at the predetermined breaking point within the rivet body and the remaining remainder does not protrude from the rivet; the torn off part of the mandrel is then in the pliers and is disposed of. In the case of blind rivets for special applications (aircraft, etc.), the mandrel residue remaining in the rivet is secured with a ring pressed in during processing. This means that no parts can come loose and the higher shear strength of the mandrel material can be fully utilized. 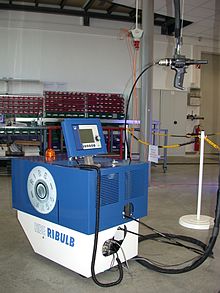 Colloquially, the blind rivet is also referred to as a POP rivet , which comes from the POP brand of the first manufacturer Emhart Teknologies . The POP rivet was introduced in Germany by Gebr. Titgemeyer  GmbH & Co. KG from Osnabrück in the 1950s. KVT-Koenig AG launched the POP blind rivets in Switzerland.

The aim of self-piercing riveting is the indirect, non-detachable connection of sheet metal parts without the pre-punching required for the usual full riveting or blind riveting. For this purpose, a rivet element (auxiliary joining part) is used, which also functions as a punch. Depending on the rivet element used, two punch riveting processes are important: punch riveting with solid rivets or punch riveting with semi-tubular rivets . Both methods have in common that they require access to both sides of the components and that the connection is made in a one-step setting process.

With punch riveting with solid rivets, the connection is created in a continuous punching and forming process , in which the rivet itself is not formed. The sheet metal parts to be connected are placed on the die . The upper part of the setting tool moves down onto the sheet metal parts to be joined. At the same time, the concave rivet element is automatically fed and positioned. The sheet metal parts are pre-tensioned by the setting unit. Now the actual riveting punch presses the riveting element through the parts to be joined, a circular piece ( punched slug ) being punched out of both sheets . The processing device for punch riveting with solid rivets is designed in such a way that after punching the parts to be joined, it presses the punch down a precisely defined path (force or path-controlled) against the resistance of the parts to be joined. The metal sheets are pressed onto the die with the force required for the partial manufacturing steps described below. Due to the ring-shaped raised structure of the punch and the die, the joining material is plastically deformed. The joining material on the punch and die flows into the space released by the concave shape of the rivet element. This completes the joining. In punch riveting with solid rivets, an essential condition for a firm connection with different directions of loading is the controlled, complete filling of the free space which is given by the geometry of the rivet element; this is the only way to achieve a non-positive and positive connection.

A high tensile strength is achieved. An almost flush finish on both sides is possible. Sheets can be of different thicknesses and made of different materials. The total sheet thickness is typically 1.8–7 mm. Rivets made of stainless steel or aluminum are common.

Even with self-piercing riveting with semi-tubular rivets, the rivet element serves as a disposable cutting punch. However, it is also transformed in the process. The sheet metal parts to be connected are placed on the die. The joint is fixed by putting on the setting unit during the advance . With the further advance, the rivet element is then fed to the joint. In the subsequent joining process, the punch rivet element, unlike punch riveting with solid rivets, only punches through the upper sheet metal part and plastically reshapes the lower sheet metal part into a closing head. The shape of the closing head is essentially determined by the contour of the die engraving. The return stroke takes place after a set maximum force (force-controlled) or a specified path (path-controlled) has been reached. The rivet element receives its closing head in the plastically deformed lower sheet metal part via a collar formation. The punched slug punched out of the upper sheet metal part fills the hollow rivet shank and is enclosed in it. Achieving a large expansion of the rivet shank is an important geometric parameter. It has a significant influence on the transferable shear and head pull forces. By upsetting the punch rivet, a high-strength and gap-free, i.e. H. tight form fit of the parts to be joined. In addition, the punch rivet is braced axially and radially so that a force fit is introduced into the connection.

A special form of punch riveting, the hydraulic punch rivets , in which a high pressure fluid acts as a stamp substitute.

There are also rivets that can be punched from sheet metal, shaped raised and with several sharp points in clothing or dog collars, textile or leather, a distinction is made between pyramid, pointed, killer, saber and witch rivets; the last ones are particularly popular in the punk scene on leather jackets. The often inclined conical tips curve when penetrating the material or standing on the inclined surface of a counter-tool, the then bent tips hold the rivet - actually by clamping, the application is called rivet because it gives the appearance of a rivet head.

Finished rivet connections must not " bounce " when they are hit with a test hammer , they must connect the components without play . Bouncing rivets must not be looked up, but must be completely replaced. If more than 5% of all rivets of a component turn out to be in need of renewal, all rivets must be replaced.

To close the rivets there is also a special tool, called the striker , who with tools such as "rivet pliers," riveting tool is operated or pneumatically driven "Niethammer" and "anvil".

In Das Boot (film) you can hear how rivets cannot withstand the overpressure and "pop out" during forced deep diving.