Herbert Norkus (born July 26, 1916 in Berlin ; † January 24, 1932 there ) was a Hitler Youth who was killed by communists during a propaganda campaign. He was then portrayed by National Socialism as a “role model for the fighting commitment of the Hitler Youth” and as a “ blood witness of the movement”. The day of his death was declared the day of mourning for the National Socialist youth (“Day of the Holy”), on which of the “fallen” Hitler Youth members should be remembered.

Norkus' father, a war-disabled stoker in the Chemisch-Technische Reichsanstalt , presumably belonged to the SA ; his nervous mother died a year before her son. Norkus was considered an inconspicuous and normal student of a high school.

On the morning of January 24, 1932, in Berlin-Moabit , Norkus and other Hitler Youth distributed leaflets from a National Socialist propaganda event. A group of young communists wanted to prevent this and persecuted the Hitler Youth. Norkus was beaten up, received stab wounds and was found in the hallway of the house at Zwinglistraße 4 in Moabit. He died on the way to the hospital. The next day the NSDAP newspaper The Attack appeared with the headline: “How the Hitler Youth Herbert Norkus was assassinated by red murder”. The violent death made Norkus a person of public interest overnight: the burial on January 28, 1932 in the New St. Johannis Cemetery in Berlin-Plötzensee was attended by 5,000 people, according to the police.

Three 18 to 19-year-old young communists who were directly involved in the murder and who were wanted fled to the Soviet Union with the support of Red Aid . In the trial that took place in the criminal chamber of Regional Court I at the beginning of July 1932, three other communists, including the Moabite KPD leader Georg Stolt , and three former SA members, who meanwhile belonged to the supporters of the renegade National Socialist Walther Stennes and, according to statements in the trial, the communists should have instigated the attack, sentenced to prison or penal terms of between one and three years.

Creation of the Myth 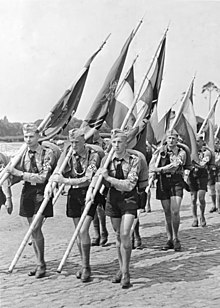 The National Socialists saw the boy's death as a good opportunity to create a myth; so alone three books about Norkus' life appeared. In 1932 the writer Karl Aloys Schenzinger took Norkus' life as a template for a serial novel entitled Der Hitlerjunge Quex , which first appeared in the Völkischer Beobachter , but was also published as a book at the same time. In the novel, however, instead of Herbert Norkus, the protagonist is the son of a communist named Heini Völker who, against his father's will, wants to become a member of the Hitler Youth. He loses his mother in a joint suicide attempt that only he survives. In the novel, he is ambushed by communists on the way home after a theater rehearsal and dies a week later of the injuries. The Hitler Youth Quex was made into a film with Heinrich George in 1933 , directed by Hans Steinhoff . The film material was bought by the UFA in April 1933. Both books and films played a significant role in National Socialist propaganda . The party regularly took the children and young people of the Hitler Youth to the cinemas, so that the film had an enormous audience. In addition, the film was used in "youth film lessons" from 1934 until it was discontinued in November 1942 without explanation. A book by Rudolf Ramlow with the title: Herbert Norkus? Here! , which, according to its own account, deals with "Victims and Victories of the Hitler Youth". In 1934, Herbert Norkus and the Hitler Youth from Beusselkietz appeared , which revolves around the direct relatives and members of the HJ group from Norkus.

In addition, Norkus was sung about in Nazi propaganda songs of the Hitler Youth, such as in Der bright day by Hans Baumann :

The sailing training ship Herbert Norkus of the German Navy as well as numerous schools, streets and squares in the National Socialist German Reich were named after Norkus . The Ottostraße and Ottoplatz in Berlin-Moabit , near the place where Norkus died, were renamed Norkusstraße and Norkusplatz. Many other German cities also had Herbert-Norkus-Straße, including Frankfurt am Main (today: Carl-Heicke-Weg), Dortmund , Garmisch-Partenkirchen , Gelsenkirchen (today: Schwedenstraße), Görlitz (today: Schulstraße) , Goldap , Leverkusen , Marburg , Olpe (originally and now again: Agathastraße), Erkelenz , Rostock and Weimar and a Herbert-Norkus-Steig in Teltow . In Gdansk was August-Bebel-Straße in Herbert Norkus Street renamed. The Herbert-Norkus-Kampfbahn in Mainz was named after him. After the war it became the Bruchweg Stadium . The former Lübeck orphanage , which had been a youth hostel since 1929 , was renamed Herbert-Norkus-Heim at the beginning of the Third Reich . The house of the friends of nature Oppau-Edigheim was renamed Herbert-Norkus-Heim. In Waldenburg / Lower Silesia there was the Herbert Norkus School.

A neo-Nazi “Kameradschaft Norkus” in Saxony has named itself after him.

On July 26, 1933, the 17th birthday of Norkus, a memorial plaque was attached to the house at Zwinglistraße 4 in Berlin-Moabit, commemorating Norkus until the war ended.