A flux is a substance added during soldering , which causes better wetting of the workpiece by the solder . It removes the oxides on the surface through a chemical reaction. The same applies to oxides that are created during the soldering process by the oxygen in the air. Fluxes also reduce the interfacial tension .

The requirement is the same for all fluxes to be used: They must secure oxide-free soldering surfaces or ensure that they are oxide-free. Fluxes vary in their composition, depending on the type of parts to be soldered and the temperature of the solder used. For both soft and hard soldering, there are special fluxes that take into account the melting point of the solder in terms of composition and concentration. 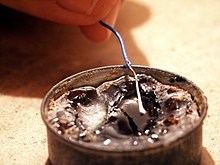 Can with flux, which is applied to a wire before the soldering process

Fluxes have different compositions for different tasks. They only reach full reactivity at the melting temperature of the solder. But they can also pose a chemical hazard at room temperature. Depending on the type, they are in contact

Therefore, when using a flux, the relevant safety data sheet with the H and P statements contained therein must be observed. This is especially true for the vapors generated during the soldering process with many fluxes.

The tools can be used for both hard and soft soldering.

The fluxes used differ according to their effective temperature and the corrosion behavior of the residues. Corrosive residues should be washed off or stripped off after the soldering process because they chemically attack the soldering point or the workpiece. 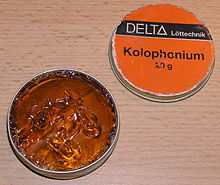 Flux residues cause, depending on the type of flux, different degrees of or only slight corrosion . The solid residues of the applied flux must be carefully removed after soldering. In addition, there are practically residue-free fluxes, so-called No Clean Flux , which are increasingly used in electronics production. Most fluxes are hygroscopic, so they absorb humidity and encourage corrosion.

Fluxes for soldering applications are specified in the EN ISO 9454 standard . They are identified by a four-digit code consisting of three digits followed by an optional letter with the following meaning: 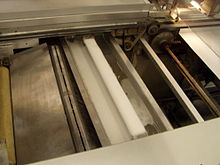 Before the introduction of DIN EN 29454-1 in 1994 (in Germany) fluxes were designated according to the DIN standard DIN 8511. The scheme for soft solders was F-SW-xx , where xx stands for two digits. DIN 8511 followed the following classification:

Comparison of the two standards

In the industry, a classification based on the specification published by the IPC according to IPC-J-STD-004B is increasingly being made (largely identical to EN 61190-1-1). This specification describes the respective flux with three letters and a number:

All combinations are possible, such as ROL0 , REM1 or ORH0 .

Occasionally you can still find English / American abbreviations with which the type and activator of a flux is roughly described, especially RA and RMA :