There are two areas in road engineering in which load classes are defined. On the one hand, built-in parts such as drainage channels , road gullies and manhole covers are divided into such classes, depending on the loads they can carry. On the other hand, the road superstructure is divided into load classes according to the RStO 2012 . 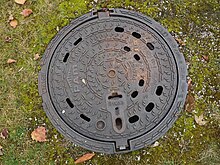 Covers from class C 250 must be secured in a traffic-safe manner.

In Germany, roads are divided into seven load classes in accordance with guidelines for the standardization of the superstructure of traffic areas (RStO 12). The relevant dimensioning load is decisive for the classification. It is calculated from the condition of the roadway (number of lanes, inclination, etc.), the expected volume of traffic and the expected type of use (proportion of heavy traffic ) during the period of use and specified as equivalent 10-tonne axle transitions . This number is decisive because the wheel load or axle transitions of heavy traffic have the greatest influence on the service life of a road pavement. According to the fourth power law , the load on a road increases with the fourth power of the axle load.

Calculation of the dimension-relevant stress

The calculation of the dimension-relevant stress for classifying a street in one of the load classes is carried out according to RStO 12 and has not changed compared to the old version of the guideline: