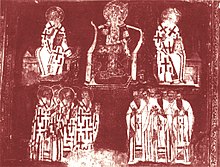 Council of the Serbian King Stefan Nemanja against the Bogomils at the end of the 12th century. Fresco from 1290

The Bogomil (other letters: Bogumiles ; Slavic: "Friends of God") were a strictly ascetic living Christian religious community with a doketistischen , dualistic educational system. Its members believed u. a. to a mighty Satan as an opponent of God. A view that spread to Western Europe in the course of the 11th century. The Bogomils rejected the sacraments , baptism, and the worship of icons .

The name of the movement can possibly be traced back to a legendary Bulgarian village pastor named Bogomil (also Bogumil , from Bulgarian Богомил “Gottlieb”, from бог bog “God” and мил mil “dear”) or to the Slavonic consecration formula Bog milui “ God have mercy ”.

The Bogomil movement spread from Bulgaria , the Byzantine Empire, the other Balkan countries and Russia from the 10th to the 15th centuries . Through the lively exchange of crusaders, merchants and itinerant preachers in the 12th century, the dualistic religious communities in the east came into contact with corresponding groups of the Cathars and Patarenes in Western and Central Europe. According to tradition, a Bogomil bishop, Nicetas , attended the Cathar Synod in 1167 in Saint-Félix-de-Caraman . Alleged direct connections to the medieval Bosnian Church are disputed by recent historical research.

The teaching content points beyond the personal part of the priest Bogomil to the origin of the older dualism of the Manichaeans and Paulikians . In addition, there are vivid myths of the Bulgarian-Slavic popular belief and the content of apocryphal texts .

Bogomilism has developed in radical and moderate directions since the 11th century. The dualistic basic position led to the demonization of the material world, to the rejection of parts of the Old Testament as well as the worship of images , the usual worship, most sacraments and religious symbols as well as the hierarchy in the church. This brought the Bogomils into conflicts with the major churches and also with the state and society.

While Catharism in Western Europe developed in the context of a centuries-old Christian tradition and against the background of a crisis in the Roman Catholic Church , Bogomilism emerged as part of the Christianization of Eastern Europe under the influence of the Byzantine churches in particular . The founding of princely states coincided with the adoption of Christianity among the very diverse peoples of the East.

Western Europe continued to develop as an urban area on the Mediterranean coast despite the fall of the Roman Empire, and this was where the Cathars had their base, while the Bogomils were originally rooted in the peasantry .

While Catharism was formed in opposition to the existing church, it cannot be ruled out that Bogomilism emerged as one of the 'beliefs' that spread at the same time.

“Turan nomads from central Russia, who established a khanate here in the late 7th century . Two centuries later, the Bulgarian ruling class was Slavic and ruled over a powerful empire that controlled an area stretching far into western Macedonia. After a series of long military battles with Byzantium, the Bulgarian state was overwhelmed by John Tzimiskes and Basilios II and was part of the Greek Empire for one hundred and fifty years from 1018. "

After this conquest, however, the Byzantine state was no longer strong enough to integrate the subjugated tribal peoples, and so the Bulgarians, who "were the first barbarians to convert, had to be granted an autonomous Orthodox patriarchate, which was synonymous with an independent 'national' church."

During this period of conflict with Byzantium and the associated influence of the Orthodox Church, according to tradition, the Bogomil-Christian faith also emerged.

"The first clearly radical religious movement in Christian Europe, Bogomilism, now emerged: an expression of peasant protest against the enormous costs of Simeon's wars and against the social polarization that went with them."

An Orthodox priest of the time summed up Bogomili's social doctrine as follows: “They teach their own people not to obey their masters, they revile the rich, hate the tsar, laugh at the elderly, condemn the boyars , regard them as worthless in the sight of God serve the tsar and forbid any servant to work for his master. "

During the Byzantine colonization and the establishment of the 'national' church, Bogomilism weakened, but the social effects associated with the occupation: a rapid expansion of large estates with the result that “more and more formerly free peasants on the dependent status of the paroikoi while slavery was expanded through the enslavement of prisoners of war, the rapid expansion of large estates [...] led to the revival of Bogomilism and popular uprisings [1186] which brought about the end of Byzantine rule. "

A Second Bulgarian Empire was established, whose Tsar Ioannitsa (Kalojan) achieved successes "against Byzantium in the early 13th century, but within a decade this enlarged state had disintegrated under the attack of the Mongols."

After the Mongol storm, Bulgaria did not recover and "in the early 14th century the decline of Bulgaria and Byzantium gave Serbia the opportunity to gain dominance in the Balkans."

In the north of the Balkans, where Bogomilism had also reached, the Serbian kingdom gained the upper hand in the later 12th century, whose grand župan Stefan Nemanja received the royal crown from the Pope. As a result, a council in Serbia at the end of the 12th century declared Bogomilism heresy and expelled the communities that moved to Bosnia and Dalmatia.

Pope Innocent III tried in vain with the help of the Hungarian king to force Kulin to recognize the Catholic Church. After Kulin's death in 1216, another attempt failed. In 1234 Pope Gregory IX called the Hungarian king to a crusade against the Bosnian heretics. However, the Bosnian nobles drove the Hungarians out. The process is confirmed by Michel Roquebert : “At the end of the 12th century, Kulin, the Ban of Bosnia, even proclaimed [Bogolism] to be the state religion. Despite the crusade led by the Hungarian king on the orders of the Pope, he was able to assert himself here. ”Bogomilism persisted in Bosnia for over 200 years.

In the early 14th century, the Serbian ruler Stephan Dušan had extended his empire over the entire Balkans to Thessaly, but as a result of the overstretching and its weak organizational and political structures, after the ruler's death it “fell back into the areas of quarreling despots and divided Apanages. [...] In the second half of the 14th century it was Bosnia's turn to rule for fifty years: but the Bogomil beliefs of this dynasty and the eligibility of its monarchy prevented this mountainous outpost from following its predecessor, the Serbian Empire, emulate. […] The contest between Byzantium, Bulgaria and Serbia ended […] at the end of the 14th century in a general setback and decline. "

In addition, there was the “ great plague ”, which “between 1348 and 1450 brought a total decrease in the population from 6 million to 4.5 million in an already sparsely populated region [in the Balkans]”.

The fourteenth century was - in the context of the general depression across Europe - a century of social revolts in the countryside in the Balkans and also of urban upheaval on the Adriatic. "In Bosnia, where the Bogomil peasantry by the Catholic Church as Patarines was particularly persecuted -Ketzer and delivered to slave catcher troops of the Venetian and ragusischen merchants, welcomed the rural masses and parts of the local nobility, the Turkish government welcomed and finally converted largely to Islam. [...] The Turkish conquest, which eliminated the big landowners, was in a sense a 'liberation of the poor' ”.

"It was only with the invasion of the Turks, which began in 1463 and ended in 1481, that Bogomilism disappeared from the Balkans."

Roquebert assumes that “Bogomilism spread from Bulgaria to Western Macedonia and the Peloponnese ; in the east he reached Philadelphia, in what is now Turkey, in the west Dalmatia and Bosnia. [...] The fact that itinerant preachers who took the most important trade routes - the valleys of the Po, the Rhône, the Rhine - spread Bogomilism from the Balkans does not mean that there are not spontaneous formations of dualistic forms in the West too Centers. "

According to Roquebert, a first "heretical wave" is attested for the first third of the 11th century: Vertus in Champagne around the year 1000, Toulouse 1017, Orléans 1022, Monteforte in Italy 1034. These are dates in which Bogomilism is also currently first formed. "From 1050 to 1100 one observes a noticeable decline [in the West] which coincides with the successes of the Gregorian reform ."

The different civilizational prerequisites in West and East, the simultaneity of the emergence of the respective centers and the research on Catharism speak for an overarching attractiveness of the dualistic teachings and a certain exchange among the believers, but a causal development of the western heresies from Bogomilism cannot be identified prove. Roquebert attributes the teachings a “universal character” and attests to them “European scope”, but these are phenomena that do not necessarily have to develop as a result of spatial sequences, but rather show a simultaneity of emergence. Because of the similarities in teaching and in the ecclesiastical organization - in the five Occitan dioceses, the six northern Italian bishoprics and the four Bogomil dioceses known in the Balkans - "current research [according to Roquebert] considers it to be practically proven that Bulgarian Bogomilism [ ...] and Catharism [...] are one and the same religion. "

There is evidence of the adoption of a script - " The secret Lord's Supper , or questioning of John - a text that was transmitted to the Cathars in Italy and Languedoc around 1190 by the Bogomils."