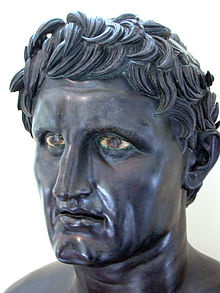 Seleukos I. Nikator ( ancient Greek Σέλευκος Αʹ Νικάτωρ "the victorious") (* around 358 BC ; † 281 BC ) was a Macedonian general under Alexander the Great and later king of the Seleucid Empire that he himself founded . Seleucus was one of the diadochi .

Between 358 and 354 BC Seleucus was born in Macedonia as the son of the Macedonian general Antiochus and Laodike . According to Stephanos of Byzantium, his place of birth was a city called Oropos that cannot be localized. For a time Seleucus served probably at the court of King Philip II of Macedonia as basilikoi paides ( βασιλικοὶ παῖδες ), a kind of page . As a Hypaspist he denied the Asian campaign of Alexander the Great , in the course of which he rose to command the Hypaspist bodyguard and join the ranks of the Hetairoi . In the battle of the Hydaspes in 326 BC He led his department on the right wing of the Macedonians, against the elephants of King Porus .

After returning from India, Seleucus was at the mass wedding of Susa in 324 BC. Married to the Sogdian noblewoman Apame , a daughter of the former Alexander opponent Spitamenes . This was to remain the only Macedonian indigenous marriage bond that survived Alexander's death.

After the death of Alexander in 323 BC In Babylon , Seleucus was appointed Chiliarch (court marshal) to the regent Perdiccas in the new "Babylonian Empire Order". At his behest, he accompanied the Greek Eumenes from Kardia to Cappadocia in order to support him in the fight against Ariarathes . Then Seleucus moved with the imperial regent to Egypt to prostrate Ptolemy there . However, after 320 BC. When the crossing of the Nile had failed, he conspired with Antigen and Peithon against Perdiccas, whom they killed in his tent.

At the Triparadeisus conference , Seleucus was given satrapy over Babylon, the unofficial capital of the Alexander Empire, from the new imperial regent, Antipater . In the next few years he supported the strategist of Asia, Antigonos Monophthalmos , in the fight against Eumenes of Cardia, whereby Seleukos is said to have also pursued personal ambitions. On behalf of Antigonus, he besieged 317 BC. The city of Susa, which, however, stubbornly defended itself. Only after the end of Eumenes at Gabiene did the city surrender to him. 316 BC BC Antigonus moved into Susa, who gave satrapy over this city to a Persian. Seleucus had probably hoped that this office would be entrusted to him as a reward for his services. Although he raised no objection to this decision, Antigonus nonetheless recognized in him a potential disturbance factor for his rule in Asia. When Seleucus reprimanded a high-ranking general for an insulting incident, he was ordered by Antigonus to clarify the matter in his camp. Seleukos feared to be eliminated there, similar to the Peithon , which had become too powerful for Antigonus shortly before , and therefore decided in the spring of 316 BC. To flee to the court of Ptolemy in Egypt.

Now in the service of Ptolemy, Seleucus took part in the war against Antigonus ( third diadoch war ) as a naval admiral in the Aegean region . He initially failed in 314 BC. At the siege of Erythrai , but was then involved in the successful conquest of Cyprus in the following year. End of the year 313 BC Chr. He landed in the compound of a fleet of Cassander on the island of Lemnos , but broke shortly after the siege of Myrina and returned to Egypt.

Seleucus fought as a general in 312 BC. At the side of Ptolemy in the victorious battle of Gaza against the young Demetrios Poliorketes . On the opposing side fell in this battle the general Peithon , who had been appointed satrap of Babylonia by Antigonus after Seleucus' flight.

Beginning of the Seleucid era 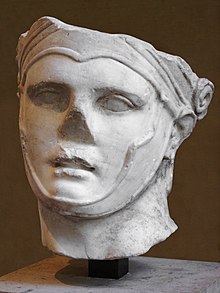 The victory at Gaza turned out to be a trend-setting for Seleucus. Ptolemy seized the opportunity to open a second front at Antigonus' rear by providing Seleucus with a small force with whom he traveled through the Syrian desert and successively brought the cities of Mesopotamia and finally Babylon under his control. He then defended this success with a brilliant victory on the banks of the Tigris over the satrap Nikanor . With this, Seleucus had restored his rule in Babylon, which was now his starting point for the establishment of his own empire. At the same time begins with the year 312/11 BC According to the current historical calendar, the Seleucid era .

Propagandistically, Seleucus legitimized the rule he had won through a prophecy of the Branchidai oracle of Didyma , which announced his origin from the sun god Apollo . In order to further strengthen his ideological closeness to this god, he returned the bronze image of Apollo, once stolen by Xerxes, to the sanctuary. Part of this propaganda was probably also the sister named Didymeia , who was attributed to him by a late source , who was supposed to underline his family connection to the god.

From the so-called Diadochian Peace in 311 BC. Seleucus was excluded because Antigonus did not want to accept the loss of Babylon. Despite his numerical inferiority, Seleucus was able to assert himself in the Babylonian war against Antigonus that followed. Although he soon left Babylon with his troops, the city managed to defend itself against two sieges by Antigonus and Demetrios. Meanwhile Seleucus conquered Ekbatana , Susa and Persepolis one after the other . In 309 BC BC Antigonus gave up the war and probably agreed an oral peace treaty with Seleucus, in which he recognized Seleucus' conquests. The peace negotiated with Antigonus probably also included the surrender of the eastern satrapies of the Alexander Empire to Seleucus. After the peace treaty, Seleucus left for a stay of several years in the east, where the local satraps recognized him as their overlord. During this time he had no part in the events in the west, but he also assumed the title of king in the year of the kings (305 BC). In India, Seleucus closed in 303 BC. A peace with the first representative of the Maurya dynasty, Chandragupta (Greek Sandrokottos) by ceding part of his dominion ( Gedrosien , Arachosien , Gandhara and Paropamisaden ) and receiving 500 war elephants in return.

In 302 BC Seleucus returned to the west, where a decision in the fight of the Diadochi against Antigonus Monophthalmos was pending. He allied himself with Lysimachus , with whom he 301 BC. BC won the decisive battle of Ipsos against Antigonos, who was killed in the process. The elephants he brought with him from India provided a decisive advantage. The victory enabled Seleucus to expand his sphere of influence to Central Anatolia and Syria, but now came into conflict with his former friend Ptolemy over the possession of Koile Syria (now Palestine). Ptolemy made a claim on this land, although he himself did not take part in the battle. Seleucus therefore allied himself in 300 BC. With Demetrios Poliorketes, whose daughter he married, while Ptolemy joined forces with Lysimachos. In this way a balance of power developed in Asia for the next few years, which prevented a major war. The dispute over Syria was not resolved, which later laid the cause of the Syrian wars between the Seleucids and Ptolemies.

After 297 BC After Demetrios left for Greece, Seleucus had the opportunity to round off his empire by usurping his property in Phenicia and Cilicia. He now ruled the entire Asian part of the former Alexander Empire, with the exception of western Asia Minor. By establishing numerous cities (see: Seleukia , Apamea , Antioch ) he consolidated and stabilized his kingship. His Macedonian warriors and newly arrived Greek settlers settled in the new cities. He moved the center of power from his original Mesopotamian area to Syria with the capital Seleukeia Pieria . 288 BC BC he concluded an alliance with Lysimachus, Ptolemaios and Pyrrhos I against Demetrios, because of his large-scale armament projects in preparation for an attack on Asia. However, the attack was not as difficult as expected, as Demetrius' army in the mountains of Cilicia was worn out and partially passed over to Seleucus. 286 BC Finally Demetrios surrendered to him.

In the last years of his life Seleucus got into an argument with Lysimachus. He ruled over Thrace, western Asia Minor and Macedonia and was able to attack Greece, which made him increasingly too powerful for Seleucus. Seleucus benefited from the disputes in the family of Lysimachus. After this at instigation of his second wife in 283 BC. Chr. Had his son executed, Seleucus took this as an excuse to start a war. He won 281 BC. In the battle of Kurupedion over Lysimachus, who was killed in the process, and was able to incorporate the entire Asia Minor into his empire.

At the age of well over seventy, Seleucus decided to return to his Macedonian homeland, which he had left with Alexander fifty years earlier, to die there as king. He left the Asian Empire to his eldest son Antiochus and crossed the Hellespont to Europe. Shortly afterwards, however, he fell victim to an assassination attempt by the ambitious Ptolemy Keraunus near Lysimacheia . The governor in Pergamon , Philetairos , acquired Seleucus' corpse for a large sum and left his ashes to Antiochus, who had his father buried in a mausoleum called Nicatoreum in Seleukia Pieria.

The last Diadoche died with Seleucus. He led the empire founded by him and named after him to its greatest extent. After his death, it was subjected to a long-lasting process of decay that could never be stopped in the long term and finally with the annexation of the territory into the Roman Empire in 63 BC. BC ended.

Commons : Seleukos I.  - Collection of images, videos and audio files