Sogdiana is a redirect to this article. For the singer of the same name, see Sogdiana (singer) . 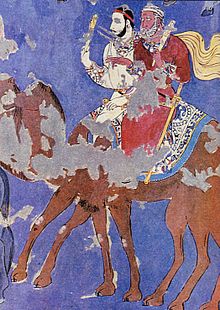 Depiction of two Sogdians in Samarqand .

Sogdia ( Sughd ) is the historical name for a part of Central Asia and an independent cultural area. Sogdia was a Persian satrapy in the Achaemenid Empire and came under foreign rule in the period that followed. The term is derived from the Sogdern (also spelled Sogdier or Sogden ), an Iranian people in this area. 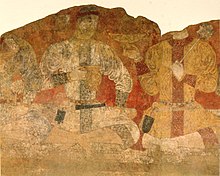 Scene of a gentlemen's banquet on a wall painting in Punjakent

Early urban settlements in Sogdia are already for the 4th / 3rd Millennium BC Occupied ( Sarasm ). The later Sogdians were an Iranian group that settled in the area between Syr Darya and Amu Darya. Since the 6th century BC Sogdia belonged to To the Achaemenid Empire . After the death of the Persian king Dareios III. broke Alexander the Great to Bactria and Sogdiana. Alexander was only able to break the strong resistance of the Bactrians and Sogdians with great difficulty and take their last fortress under the leadership of Oxyartes . Shortly afterwards he married the daughter of Oxyartes, the Bactrian princess Roxane , who was staying with her father in Sogdia. The Persian general Spitamenes also came from Sogdia .

Sogdia was important not least because of the trade routes that ran here. After the collapse of the Alexander Empire in the late 4th / early 3rd century BC. Various rulers were in power in Sogdia. The Greek successor empires ( Seleucid Empire and Greco-Bactrian Kingdom ) were initially influential before various groups advanced into this area and formed their own rulers (see Kushana and the Kangju documented in Chinese sources ).

The following period is insufficiently documented by historical sources regarding Sogdia. From the 4th century AD, however, a large number of small principalities developed here in late antiquity , which controlled trade on the Silk Road ( India trade ). These were city-states, the focus of which was the respective oases, which achieved considerable wealth and were in fact politically independent. The Sogdians also pursued cultural exchanges with the peoples they met along the Silk Road. The Uighurs got to know the religion of Manichaeism , which goes back to the Persian religious founder Mani , and declared it the state religion in the Uighur Empire. The Sogdian language became an important lingua franca in the region due to the prominent role of the Sogdians in trade.

Sogdia was also partly affected from the 4th to the 6th century by the incursions of the Iranian Huns , who advanced in several waves to the northeast border of the New Persian Sassanid Empire and sometimes involved the Persians in heavy fighting. In the 6th century, the Kök Turks ruled Sogdia, whereby under the Turkish ruler Sizabulos and his successors (see Turxanthos ) the Sogdians continued to play an important role in trade and even in politics (see Maniakh ). Sogdier also took care of the Turkish administration, which they were to do later in the early Uighur Empire, where they also acted as mediators of Buddhism . Economically and culturally, Turkish rule for Sogdia was generally very positive (see also the comments on Central Asia in late antiquity ).

The Arabs conquered the Sogdian fortresses in the valley of the Serafshan in 722 until the defeat of the Sogdian ruler Divashtich (ruled around 706–722). In the course of this Islamic expansion , Sogdia and the rest of the Sassanid Empire were converted to Islam over a longer period of time (see also the Arabization of place names such as Gardani Hissar ). In 722, a Sogdian revolt failed in this connection, in which Dēwāštič was involved, while other local rulers waited and later rose up against the Arabs (such as Ghurak ).

An important source are the Sogdian letters found by Sir Aurel Stein in 1907 west of Dunhuang on the Great Wall of China (five almost completely preserved letters and several fragments). These late antique texts, written by private individuals, contain important information about the economy along the Silk Road and also about political events (such as the capture of the Chinese capital Luoyang by Liu Cong in 311 ).

From the 10th century, Sogdia came under the influence of Turkish dynasties, and over time, Turkish elements and languages ​​have more and more supplanted the Eastern Iranian. The city population adopted the Persian language . As the last remnant of the old Sogdian population, the Jagnoben remain in today's Tajikistan , who today speak a dialect that is traced back to the old Sogdian language.

The high level of their culture, which absorbed western and eastern influences equally, can be seen above all in the paintings and objects from Old Punjakent near Punjakent in today's Tajik province of Sughd and in Afrasiab in Uzbekistan. These were capitals of principalities that are particularly well preserved. The Sogdian language and cultural area also includes the Usruschana region with the former capital Bundschikat near today's village of Shahriston .