This article covers the city in Uzbekistan. For the province, see Samarqand Province .

Samarqand , German  Samarkand ( Uzbek- Cyrillic and Tajik Самарқанд, Persian سمرقند, DMG Samarqand ; Russian Самарканд Samarkand ; Sogdian for "stone city"), is a city in Uzbekistan with 353,347 inhabitants (as of January 1, 2008) and the capital of Samarkand Province .

Samarqand lies on a plateau at an altitude of 720 meters. The area around the city belongs to the river oasis of the Serafshan , which flows around the city to the north when coming from Tajikistan . The nearest town upriver across the border, Punjakent , is 62 kilometers away. The foothills of the Seraf Shank chain , which forms a natural border with the province of Qashqadaryo , begin in the southeast at a distance of a good 20 kilometers .

Most of the city's residents speak Tajik as their mother tongue , the Central Asian form of Persian .

Afrasiab , ancestral place of Samarkand, was founded around 750 BC. Founded in the fertile plain of Serafshan as an oasis city . In the Achaemenid Empire it was the capital of the province of Sogdia . It has prospered through trade with the northern and eastern regions and its location on the Silk Road . 329 BC The city known to the ancient Greeks under the name Marakanda ( Greek : Μαράκανδα) was conquered by Alexander the Great . 712 AD it fell to the Arabs , who confirmed the city lord Ghurak in office; he was to rise again in 731 against the Arabs, who some time later brought the city back under their control. In the following years Samarkand became a spiritual center of the Islamic East. From the 9th century it came u. a. under the rule of the Samanids , Seljuks and Khorezm Shahs , in 1220 it was conquered and destroyed by the troops of Genghis Khan . In 1230 a quarter of the previous population was still alive, most of them impoverished. Under Qaidu Khan and the administrator Masud Beg , the city was able to recover at the end of the 13th century.

In the 14th century the city was rebuilt under the name "Samarkand", but not at the old location, but about 1 km southwest of the old settlement hill . The Mongolian ruler Timur made Samarkand the capital of his great empire in 1369, settled 150,000 people here, namely silk weavers and armourers, and developed the city into one of the most beautiful and important metropolises of its time. From about 1407 to 1448 Ulugh Beg ruled , who promoted the sciences and especially astronomy; governing was not his priority.

1469-1494 the Timuride Ahmad Mirza ruled Samarkand; under him, Mohammed Scheibani became a mercenary leader, switched to the service of the Chagatai Khan until, in the last decade of the 15th century, he gathered the scattered Uzbek tribes, conquered Bukhara and Samarkand from the Timurids in 1500 and re-established the Uzbek khanate . Briefly, the Timurid Babur was able to recapture Samarkand in one stroke, but not hold it. Samarkand became the capital of the new Uzbek khanate. At the time of Scheibani's death in 1510, his son Muhammad Temur ruled the city as sultan.

The Timurid Babur advanced to Bukhara and Samarkand with Persian help in 1511/12, but was repulsed. In the second quarter of the 16th century the capital was moved to Bukhara , Samarkand became a provincial city and years of decline began. In the 16th century the city had up to 100,000 inhabitants, most of whom lived from handicrafts, and here the division of labor was well advanced. A directory contained 130 "trades". The companies were very small, only rarely, as in paper production, did up to 20 people work in one company. The workshop also served as a shop. In 1598 the Kazakh Khan Tawakkul advanced as far as Samarkand and Bukhara.

Power slipped from the Bukhara Khanate around 1700 . From 1710 the Keneges and Kitai Kipchaks allied and proclaimed an opposing Khan in Samarkand. In the following years, and especially around 1723, large groups of Kazakhs fled from the jungle to Bukhara and Samarkand. They allied themselves with various Uzbek groups and there were many clashes. Samarkand was badly devastated in 1730.

In July / September 1740 the Persians under Nader Shah conquered the khanate and also occupied Samarkand.

The following important information is missing from this section:
History between 1740 and 1868
Help Wikipedia by researching and pasting it . 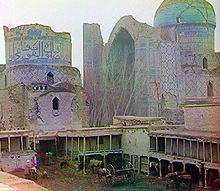 In 1868 the city officially came under Russian rule. It became the capital of a province within the General Government of Turkestan , which in 1918 became the Turkestan ASSR . In 1925 it became the first capital of the newly created Uzbek SSR , but lost this function to Tashkent in 1930 . Since 1991 the city has belonged to the independent Republic of Uzbekistan, of which it is the fourth largest city. It is also the administrative center of the region of the same name.

Samarqand is the capital of the province of the same name .

The automobile industry is located in Samarqand under state management. The SamAuto and MAN AUTO-Uzbekistan joint ventures exist here .

To the north of the city is Samarkand International Airport .

The city has a connection to the Trans-Caspian Railway between Turkmenistan and Tashkent via its train station .

Since March 2017 there is a tram again in Samarqand . A 6.4 km long route leads from the main train station to the Sat-Tepo district. Eighteen one-piece Vario LF trams without a sidecar are used. They were built by Pragoimex and were in use in Tashkent until May 2016 . Another 5 km stretch from the train station to the city bazaar (Siyob bozor) is under construction. Before that, there was a steam tram from November 1924 to 1930 and an electric tram from May 1947 to August 1973.

The M37 , which leads to Turkmenistan, the A377 to Tajikistan and the A378 to Qarshi end in Samarqand . The M39 runs through the city from Termiz via Tashkent to the border with Kazakhstan .

The trolleybus traffic, which began in 1957, was discontinued.

The city center was included in the UNESCO World Heritage List in 2001 under the title Samarkand - Intersection of Cultures as a World Heritage Site , among other things because the architecture and cityscape represent masterpieces of Islamic cultural creativity and art, architecture and urban structure represent the most important epochs of Central Asian cultural and political Illustrate history.

In Samarqand there are some significant examples of Islamic architecture , including

The city's football club is FK Dinamo Samarkand , which plays its home games in the highest Uzbek league in the 12,500-seat stadium. The Samarqand Challenger tennis tournament has been held annually since 1996 .

Wikisource: The valley of Samarkand and the silk making there by Jules Adamoli (1870)  - sources and full texts